VentureBeat’s office isn’t there, but you’ll find plenty of familiar sights in the San Francisco depicted in Ubisoft’s Watch Dogs 2. The City by the Bay is the setting for the fictional game about vigilante cyber hackers clashing with big corporations.

I visited Ubisoft in the real San Francisco, where I was able to play hands-on with a sizable chunk of the single-player game. I was able to capture a lot of video as well, and it’s once again a very interesting intersection of reality and fiction, with familiar real places like Coit Tower, Lombard Street, and the Golden Gate Bridge. In contrast to previous previews, I was able to roam around the city at will and perform a couple of missions in the game that debuts on November 15 on the PC and consoles. 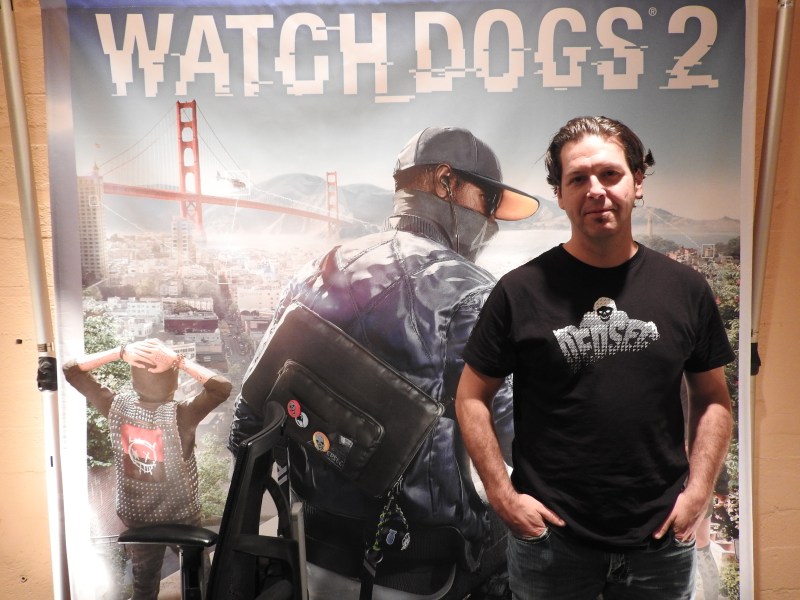 “Our goal is to make the place feel real. We want to capture the spirit of the location. Obviously it’s not 1:1. You have to make choices. We try to pick what we think is the most important,” Danny Bélanger, game director for Watch Dogs 2 at Ubisoft, in an interview with GamesBeat.

I spent a lot of time being a virtual tourist, looking for places that I recognized from the real world. The massive world includes parts of Marin County, north of the Golden Gate Bridge, San Francisco, and parts of Oakland, across the Bay Bridge. You can even visit a few big tech companies in a mini version of Silicon Valley. The landscapes are beautiful and believable. All told, the world has 46 neighborhoods.

In the story, you play as Marcus Holloway, a brilliant young hacker living in the birthplace of the tech revolution, the San Francisco Bay Area. He gets framed by some people in charge of ctOS 2.0, the software that runs the smart city. To fight back against the establishment, Holloway teams up with Dedsec, a notorious group of hackers in their war against Blume, a corporation that runs ctOS 2.0.

Hacking is your weapon. You can take control of anything, including drones, cars, cranes, security robots, and electronic doors. You can make your own 3D-printed weapons. I used a drone to scout a place under an overpass where I had to rescue a man who was being held prisoner. With the drone, I was to figure out where the prisoner was and where all of the guards were. I hacked a camera and use it to hack the smartphones of the guards to distract them. 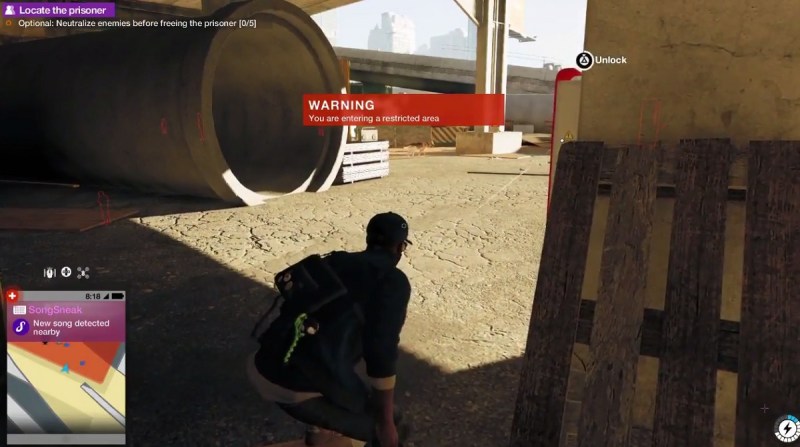 Above: Dogs are not a hacker’s friend in Watch Dogs 2.

It’s easy to see that Ubisoft’s writers are still pulling in paranoid headlines from the real world to highlight just how realistic their fictional tale about our surveillance society is. Just about every day, we hear about the efforts of companies such as Intel, IBM,and General Electric to create smart cities that are centrally managed by a huge computer network. And we hear an equal number of stories about hackers breaking into corporate networks.

“We talk about technology that’s here already or coming soon,” said Bélanger.”We looked at that in the first Watch Dogs and knew there was a risk there. We used that ability to hack everything. But definitely, everything is going to be connected in the future. Hopefully we make people think about security, make sure it’s robust, find ways to prevent any risks.” 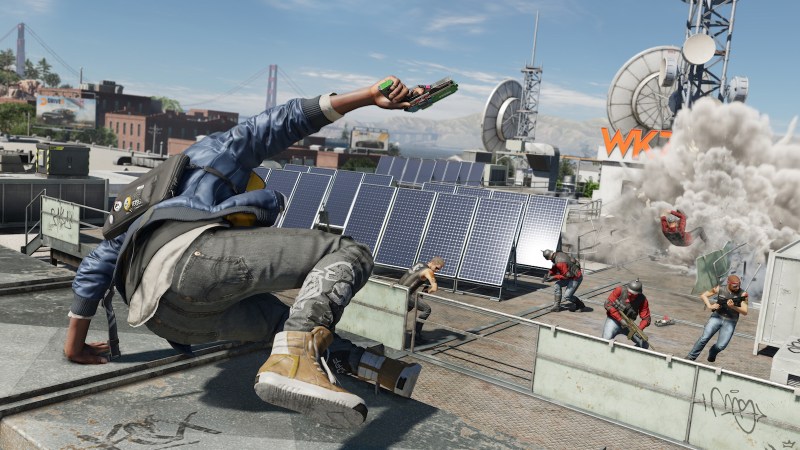 Above: Action in Watch Dogs 2.

I’m looking forward to seeing more of San Francisco, and I want to see how the developers bring the tech culture and rebellious nature of San Francisco into the story. The sequel has a lot of improvements over the original Watch Dogs in things such as driving control, and the cast of characters from the hacker culture looks pretty interesting. I met a masked character from the DedSec crew who was trying to pull a chip out of a toaster.

While Holloway is out for revenge and there’s plenty of shoot-em-up violence, this game isn’t as serious as the first Watch Dogs, which was a very emotional revenge story. Holloway seems like he’s a lot less serious, and really wants to just kick some butt. The game’s emphasis on DedSec and its zany subculture seems more like a celebration of hacktivist culture.

The game allows you to fulfill the missions with help from co-op partners, or other human players. I had a tough time liberating the prisoner without a second player to distract the guards. So I eventually had to start shooting. I was able to extract the prisoner after many tries, but it felt like a failure since I didn’t use stealth during the whole mission.

I had to shoot a bunch of guards and police officers, but I eventually made it out of the compound and stole a car. I drove it a little ways and then stole another car. After that, I drove off and eventually shook the pursuit. I passed by the Ferry Building clock tower and drove on the Embarcadero. When it was over, it seemed easy. But in the grand scheme of things, that one mission was pretty hard. The next mission, downloading some data at a station up on the hill, was pretty easy.

Here’s my “successful” rescue mission and then a second mission up on the hill.

And here’s where I meet a DedSec member.