Developers are given a plethora of tools to build and grow their mobile apps. Platforms release APIs and SDKs in hopes that apps will be built upon them, and there are even resources dedicated to increasing exposure among the masses. But in this data-driven world, having all the bells and whistles, marketing magic, and so-called growth hacking isn’t enough — being able to track the people actually using your app is essential.

Last year, at its F8 developer conference, Facebook introduced Facebook Analytics for Apps, a tool that draws comparisons to Google Analytics — but for apps. It provides data about the audience, which devices see the most usage, and other information for marketing campaigns. At the time, company chief executive Mark Zuckerberg shared that 95 percent of apps in the App Store and on Google Play were integrated with Facebook. Today, more than 800,000 apps are powered by the social networking company’s solution. 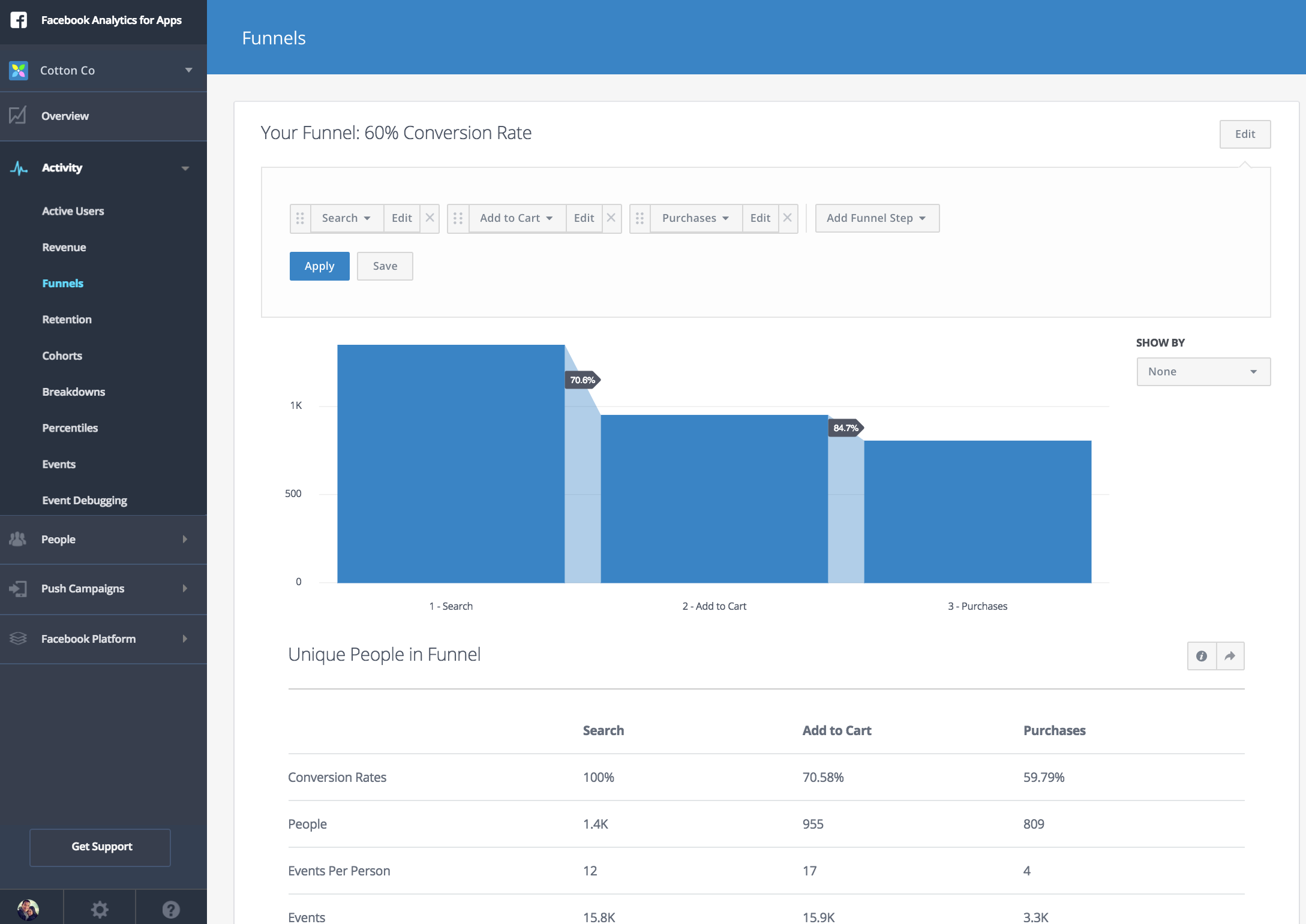 “It’s more than getting an app installed,” said Facebook product manager Josh Twist. “We can help drive installs on mobile apps, but that’s not the end of the journey. Facebook knows the way to drive retention and engagement and conversion hangs on understanding people.”

Facebook isn’t unique in the analytics space, and competitors include Google, Localytics, App Annie, Adobe, and Mixpanel. However, Facebook prides itself on having an extensive user database and expertise in producing scalable mobile apps that get a lot of usage. “We have a deep understanding of audience demographics and can share that with developers in an anonymous and aggregated way,” Twist said.

He said that competitors’ solutions often attempt to understand what’s going on generally, while Facebook’s approach prioritizes information based on the user. When apps connect to the company’s social graph, they’ll be able to gain insights into who their users are, along with their interests, friends, and other pertinent information. Through this, developers can better target their campaigns.

“A number of players in the space have demographics but can’t go into the depth and accuracy of Facebook,” Twist explained. “We can understand age, country, language, job title, education, relationship status, and can tell you what [Facebook] pages customers like.” With more than 1.7 billion monthly active users, Facebook has shown that it’s one of the few companies that can demonstrate such growth — just look at WhatsApp and Facebook Messenger as examples.

Twist also boasted about Facebook’s speed, saying that the company “thinks you should be able to see the data in the various funnels in a couple of minutes, not overnight, especially when [you’re] making changes on the fly and want to see if it’s having an impact. [Developers] want to see information very quickly.”

It might seem obvious, but app tracking differs not only from the web to mobile devices, but by geography. Markets can vary in many ways, and Twist posits that the data reflects differences in users’ levels of excitement, experiences, and in the fidelity of the devices.

Market-specific targeting is something Facebook has been working on for a while. While users in the U.S. usually have access to advanced technology and reliable connectivity, those in countries like India are dealing with a host of access issues, and very few have unlimited data usage. “We see all sorts of behaviors where people with high-end devices in those communities behave more like people in the U.S., but a significant portion will use low-end devices, and this changes everything, including how they interact with the apps,” Twist explained. He noted that those with little storage on their device are quick to uninstall apps they aren’t using. 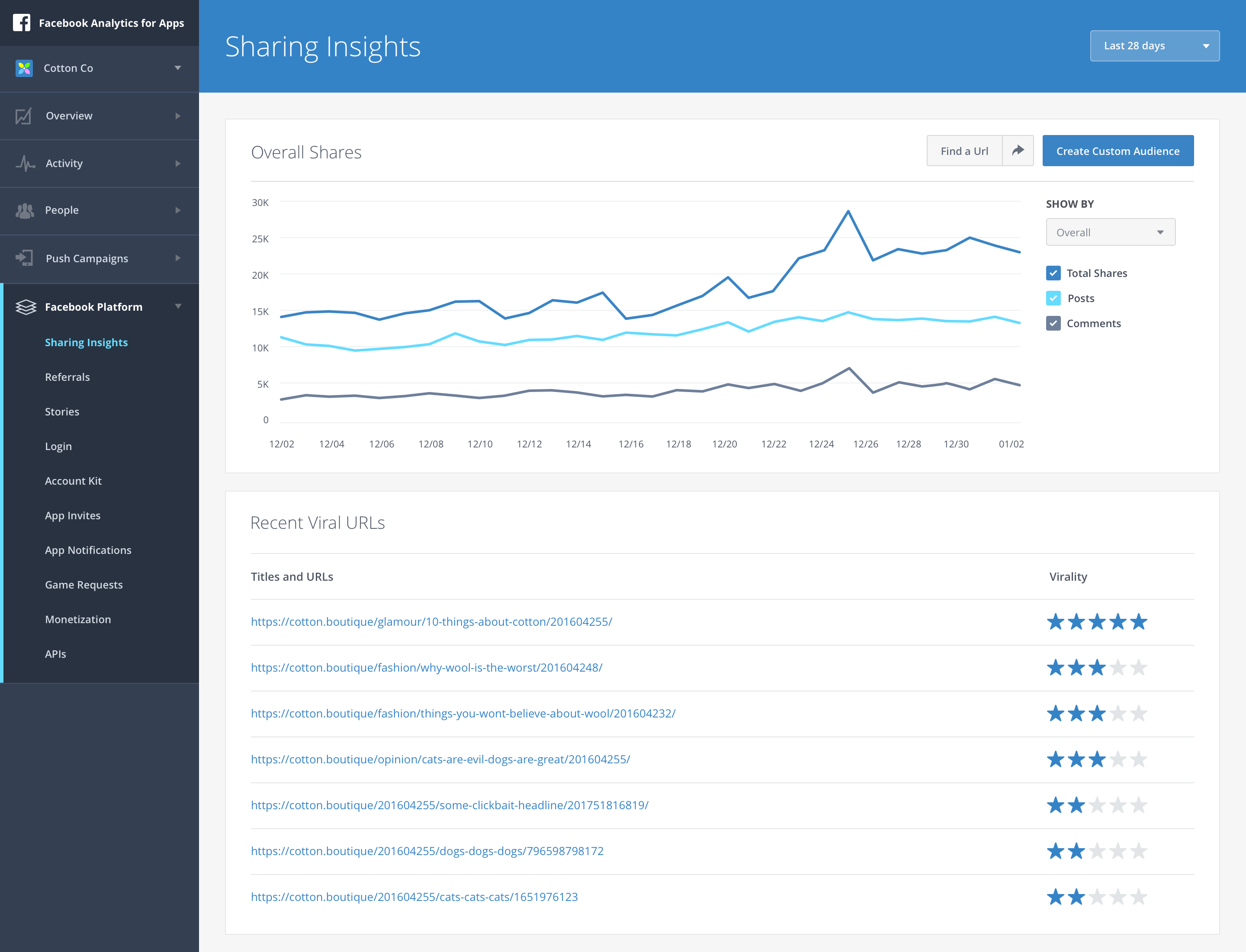 “[India is] a very mixed space and is challenging,” he added. “It makes it harder to build a tool like analytics.” But being able to do so reliably is important to Facebook, as it’s a truly global company. Twist revealed that 85 percent of developers using the company’s analytics solution are from outside the U.S.

After offering app analytics for more than a year and powering analytics for 800,000 apps, Facebook is now ready to provide additional support. It will continue to offer app building resources, largely through its FbStart program, and to add additional insight features, but the company feels its impact won’t truly be felt until developers understand how to take advantage of its Analytics for Apps. This is why Facebook will be launching education courses in the next few weeks.

“People spend a lot of time in their analytic tools and want to make [them] more effective so they can spend more time on higher-level activities,” Twist said. “We’re passionate about making life better — we’re going deep into core business intelligence capabilities to make it better, so when people use [Facebook Analytics for Apps], productivity goes through the roof.”

He acknowledged that analytics is a complicated space and most developers and marketers may not be able to pick it up right away: “It’s very easy to misunderstand the situation just by looking at the numbers.”

Facebook intends to offer tutorials on its product to developers, marketers, and anyone else who’s interested. It’s one thing to see how many people used an app on Android devices from Germany, but it’s another to be able to combine that with additional metrics and events to make informed decisions about future development or corrections that are needed.

The company will likely also be clearing up common misconceptions about using Facebook Analytics, dispelling the notion that you need to log in with your Facebook account, for example. “We still provide demographic information with fidelity and quality if you don’t have any other association,” Twist said.

He also shared that there have been discussions about expanding analytics to other app classifications, such as virtual reality, Internet of Things (connected objects), and perhaps even bots. No firm plans have been made, but it’s certainly something Facebook is looking at.

“We’ve seen an evolution where 10 years ago, it was largely web. Then it was web + mobile web, then web + mobile web + apps. Now we are seeing it’s all of those + bots. What we are seeing is that today, platforms are additive, and people are having to develop more additional platforms, as consumer behavior has evolved to using different platforms based on the context,” he said. “We think the journey is 1 percent finished.”