Our industry faces a well-known duopoly: Facebook and Google command an ever-increasing share of digital ad spend, both in the US and globally. I recently dug into the data and forecasts available to better quantify just how much Facebook and Google are eating digital. Here’s what I found:

The US market will represent 35 percent of the global ad market, reaching $234 billion by 2020, with a slightly slower growth rate compared to the global average, at 5 percent from 2015 to 2020. The higher average global growth will be due to rapidly developing markets in the East and a growing middle class that advertisers can focus on. 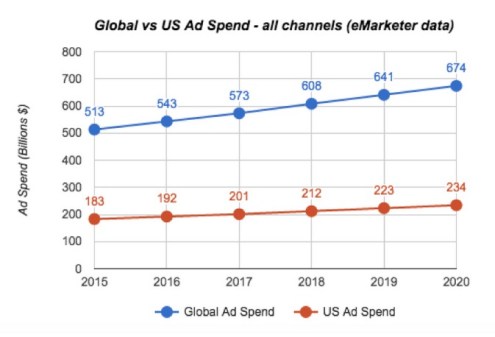 45% of US ad spend will be digital

33 percent of ad spend in the US was digital last year, and that is expected to reach 45 percent by 2020. In real numbers, that’s a $60-billion market growing to $105 billion, with a compounded annual growth rate (CAGR) of 11.9 percent.

The growth of digital is more than two times higher than the growth of the overall ad market, which represents a tremendous opportunity for digital businesses. More people are accessing content online, and more advertisers are spending their budgets online. Will the rising tide lift all ships? 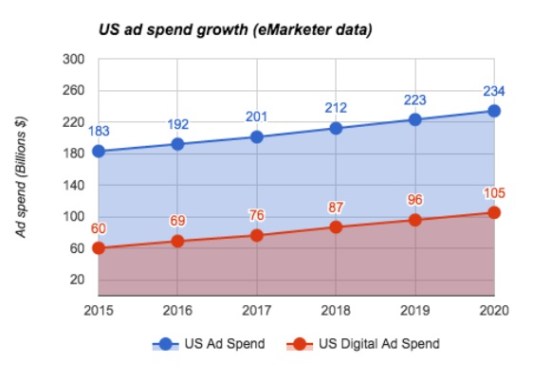 Ad spend on mobile will grow 141 percent from the $32 billion spent last year to $77 billion forecasted to be spent by 2020. And this is only in the US. That’s an impressive CAGR of 25 percent. The industry has talked about the “year of mobile” for over a decade; however, now we are going to see real revenue growth.

Because the growth of mobile ad spend is more than two times that of digital growth – and about five times that of the overall market growth – mobile will be 73 percent of all digital ad spend by 2020, up from 53 percent last year. How many digital businesses can say they are pacing to have three-fourths of their revenue come from mobile over the next few years? 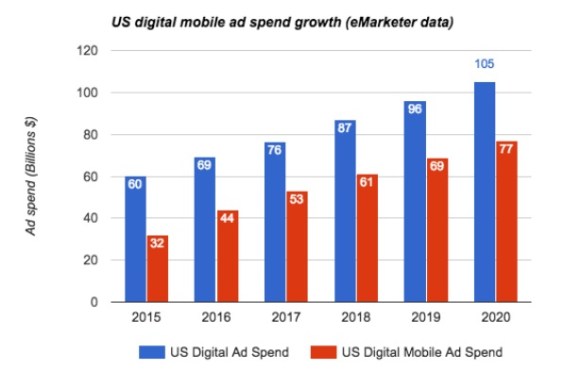 Facebook and Google are growing faster than you are

50 percent of mobile ad spend in the US was with Google and Facebook in 2015; that figure will be 71 percent by 2020. That’s $54 billion of the $77 billion spent on mobile in the US going to two companies, which is up from the $16 billion they generated combined last year from mobile in the US market.

I made these estimations by looking at eMarketer data, which breaks out both Facebook and Google’s ad revenue by platform and geography. I took their US mobile ad revenue from 2015 to 2017 and applied the same growth rate (26 percent) from 2017 to 2020. So the above forecast assumes that their growth rate stays constant. I feel this is a reasonable estimate given that the relative accelerated growth rate they are experiencing as of late may be offset by the absolute revenue figures we are talking about ($16 billion to $54 billion over a five-year period). 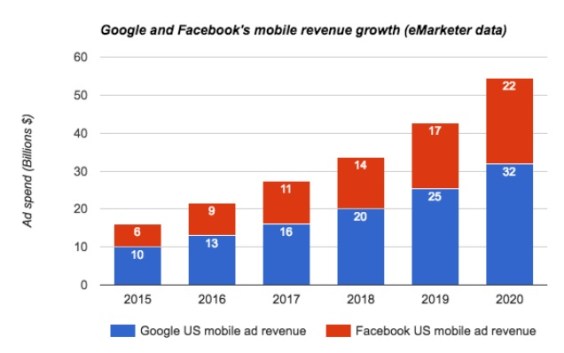 The good news is that the overall ad market, digital as a share of that, and mobile as a share of digital, are all growing. Digital advertising is a growing market, and it’s always good to be building a business in that situation.

The not-so-good news is that Facebook and Google are growing at faster rates than the industry, which means they will have an even more dominant market share and the advantages that come with that unique position.

I do think we will see a third player – and possibly a fourth – emerge over the next few years, providing marketers with an alternative to the current duopoly. The playbook for this has to be anchored on mobile and video. A few (obvious) companies come to mind, but many of the new digital entrants are considered one-trick ponies who have a killer feature or two on which they hinge their success.

What we do know is that everything changes, and in this industry, a little faster than we appreciate or realize. The third player may not be an obvious one.

[A version of this story originally appeared on the Polar blog.]