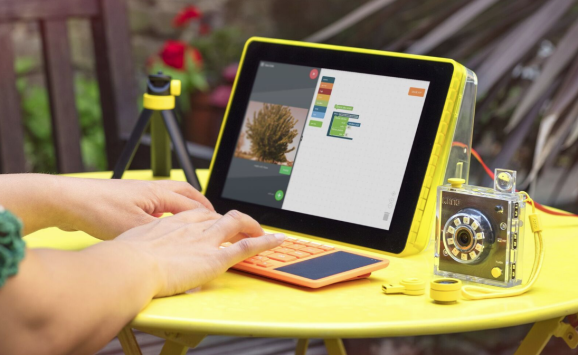 “Oh my gosh, this computer actually works!” exclaimed a nine-year-old boy when he booted up the Kano PC he’d just built himself. He’d been skeptical. This was not like the sleek, closed devices the boy has at home and at school; he had handled and assembled the actual components of this computer himself. Suddenly, motherboard, memory card, and the HDMI cable were no longer abstract objects.

Kano is on a simple mission to make coding fun for young kids — like the boy in this story — and today, the company announced the addition of camera, pixel and speaker kits to its DIY PC, as well as Kano code, a free, open-source coding tool. “We asked ourselves, what if we could physicalize more of the cool things that kids want to do with coding?” CEO and cofounder Alex Klein told VentureBeat. “These additions help digital computing transfer into the physical world and back again.”

For instance, a child might be curious about how often her dog drinks water. She can write code that would use a sensor and camera placed next to Fido’s water bowl to snap a digital photo every time the dog trips the sensor. Kano seems determined to help kids unleash their creativity — no matter how frivolous or serious the project — and is filling the gaps between different levels of coding.

“I think it’s easier than Scratch and teaches you commands like ‘/tp’ to teleport blocks and tunnels into Minecraft,” the boy explained to VentureBeat, after he had spent a few hours with the Kano over a weekend. “You can hack games so that you instantly win and also learn commands to make sound effects, change colors, and display words across the screen, like ‘#doges’.”

Most coding instruction for young kids is “too functional,” Klein says. “It’s: Build an iPad in two weeks. There’s a need to help kids transition from block-based coding to text, like, say, Python.”

Kano’s message has been well-received by students and educators, with more than 100,000 kits shipped to customers in 86 countries. The London-based startup began in 2013 as a Kickstarter project, raising $1.5 million from 13,000 backers. After releasing its initial kits, Kano raised a $15 million series A round in May 2015. To date, the company has received $19 million in total investments from Jim Breyer, Marc Benioff, Martin Sorrell, Index Ventures, James Higa, Troy Carter, and Shana Fisher, among others.

Even with this robust backing from the venture community, Kano is launching a $500,000 30-day Kickstarter campaign. Participants may receive one of the three new tools: camera, pixel, or speaker. Klein explained that Kickstarter fundraising offers a way to engage with the company’s community and to get valuable feedback: “We’ll be able to validate parts of our roadmap based on feedback, and the data will help with things like demand planning.” For instance, information gathered from Kickstarter will help inform sales expectations for the three new standalone products, described by the company as follows:

These new kits work with Kano’s Computer Kit , which is a single-board Raspberry Pi computer (the “Kano Brain”) and a keyboard, which can connect to Kano’s Screen Kit (or any monitor) or to other devices with built-in Wi-Fi, Bluetooth, and USB. Suggested retail price of the new kits will be $130 each. The Pixel Kit will be the first product to ship, beginning in January 2017. The Computer Kit and Screen Kit are available for purchase now at Kano, Amazon LaunchPad, and through Kano retail partners Toys “R” Us and Barnes and Noble for $150 each.

And when the nine-year-old boy was asked what he’d do with a camera, speakers, and pixel kit, he replied “I’d teleport pictures of flying dogs that change colors every time they bark into Minecraft. That would be an epic hack.”

Another youngster inspired to code.