Spin Transfer Technologies (STT) is announcing today that it has developed a new kind of magnetic memory chip to take on the mainstay memory chips dominating the multibillion-dollar industry today.

Fremont, Calif.-based STT has created magnetoresistive random access memory (MRAM) chips with circuits that are as small as 20 nanometers apart. (A nanometer is a billionth of a meter). In the memory cells for these chips, data is stored using magnetic elements, rather than electric charges or current flows. Proponents of this technology, such as STT, say it offers advantages in speed, power efficiency, cost, reliability, and scalability.

MRAM could one day take on the $45 billion market for dynamic random access memory (DRAM), which is used in most mobile and computer gadgets today. It could also compete with flash memory and static random access memory (SRAM). These are fundamental building blocks of the electronics economy, and they’ve been around for decades. But MRAM proponents say they can disrupt those markets. Market researcher Coughlin Associates estimates that MRAM could be a $1.3 billion market by 2020.

Manufacturing is still a huge challenge, as it takes years to prove reliability, and it isn’t cheap. But STT has moved from incubation to MRAM development in four years, and it expects to commercialize its technology in the next couple of years. Other rivals have taken a decade to hit that same milestone. STT is a subsidiary of Boston-based Allied Minds and has built a research and development fabrication plant in Fremont, Calif. 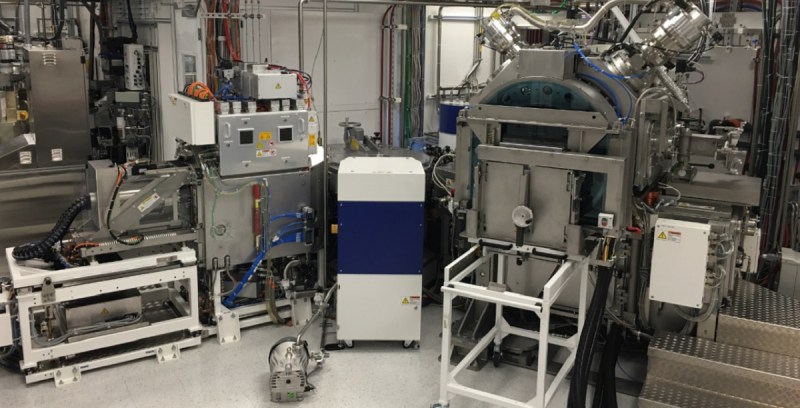 Above: It takes a lot of machinery to make MRAM chips.

The MTJ is the primary component of an MRAM bitcell and is the core technology of an MRAM device. STT has had working ST-MRAM memory chips internally for some time, and, based on requests from major semiconductor and systems companies, the company is now preparing to deliver fully functional samples to select customers. The chips offer faster switching times, lower costs, lower power, and scalability to smaller circuitry.

SST has moved its MRAM technology from R&D to commercialization, largely on the strength of development done at its magnetics R&D fab. This R&D fab includes state-of-the-art process and analysis equipment, enabling the company to compress engineering development cycles to 10 days that otherwise would have taken several months.

“Since the beginning of the year, we’ve been able to process more than 40 wafer lots, an achievement that likely would have taken more than three years without our on-site R&D fab,” said Barry Hoberman, CEO of STT, in a statement. “In just four years, STT has taken the journey from incubation to commercialization. We are excited to enter the next phase of the company’s evolution.”

The technology came from professor Andrew Kent of New York University. Allied Minds met with him in 2007, and the company was established in 2012 with a $106 million investment from Allied Minds. The technology is patented and could be used in a wide variety of mobile, automotive, Internet of Things, and data storage products.

Initial samples of STT’s fully functional MRAM memories are targeted for non-volatile memory applications. The company is currently preparing evaluation boards to enable customers to fully assess the parameters of the memory. The chips are expected to hit the market in 2018. Rival EverSpin filed for an initial public offering earlier this month.