I know you thought the deluge of League of Legends clones from big publishers was over, but you thought wrong. 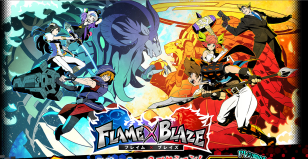 Above: If Flame x Blaze looks familiar, it’s probably because you played the designers previous game The World Ends With You.

Square Enix is working on Flame x Blaze, a new multiplayer online arena battler for smartphones and tablets. It’s heading into a testing phase soon. Like popular mobile multiplayer online battle arena (MOBA) Vainglory, it features 3-on-3 matches and a large number of characters with different abilities. A beta will begin in Japan this winter, and Square Enix is promising to release it in North America soon after that. The MOBA genre is one of the biggest in the world thanks to games like League of Legends, and Flame x Blaze is Square Enix’s attempt to capture some of that revenue from the $36.6 billion mobile gaming market.

MOBAs are also the most popular esports games. League of Legends — as well as competitors like Dota 2, Smite, and Heroes of the Storm — all attract huge audiences for pro-gaming tournaments. Thousands of people show up at event halls to watch top teams play and millions more watch online.

This is not the first mobile MOBA to hit iPhones and Android devices. The aforementioned Vainglory has established a fan base and proven that this type of action can work on a touchscreen. But even that game has not replicated the success of its desktop counterparts. Vainglory doesn’t rank in the top 100 for highest grossing iPhone games while League of Legends is generating nearly $1 billion annually.

Square Enix and Vainglory developer Super Evil Megacorp aren’t the only companies chasing after that money. Big publishers like Valve and Blizzard have their own MOBAs. And Electronic Arts started and canceled its Dawngate MOBA before officially finishing it.

For Flame x Blaze, Square Enix is focusing on Japan, which is one of the top-spending mobile markets in the world alongside the United States and China. And the publisher has an experienced team working to ensure its MOBA appeals to gamers in its home country. The World Ends With You character designer Gen Kobayashi is creating the heroes, Final Fantasy XIII boss Yuji Abe is directing, and Kingdom Hearts Unchained X producer Hironori Okayama is overseeing the project.