Twitter-owned Periscope on Tuesday introduced a VIP program aimed at supporting the most ardent broadcasters of its livestreaming platform. Through continued usage and engagement, the company promises additional resources to creators that’ll help increase the quality of their content.

Enrollment in the program is free, but there are some requirements that must be met, such as how many followers a creator has, the average views per video they receive, and the frequency of posts. With membership, Periscope promises to provide special badges that will be displayed on profiles and other places on Periscope, while also improving discovery of your content, such as putting you on a Suggested User List of sorts. Creators will also be able to work with other broadcasters that share similar interests. 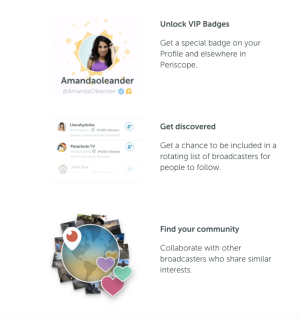 The benefits creators receive also varies with each tier. Bronze membership entitles them to a “care package” so they “look on point” when broadcasting, prioritizes them in search results, and gives them access to the latest best practices and materials to enhance their content. From there, Periscope can add creators to beta lists for future discovery products, special customer support, access to a dedicated Slack channel to work with other broadcasters, and eventually to work directly with the Periscope team on broadcasts.

“The VIP Program was designed for broadcasters who’ve invested in our platform and continue to share great live experiences on Periscope,” the company wrote in a blog post.

While the program is being introduced today, Periscope said it’s still “coming soon.” It’s the next evolution in Twitter bringing on board a strong creator community, especially as it pushes its live event strategy. Faced with competition from YouTube, Facebook, and even Snap(chat), Periscope has to incentivize broadcasters to use its service instead of flocking to other services, which may be appealing due to larger audiences or experience in supporting creators.

The company has also been testing new functionality that will give broadcasters the ability to incorporate video from external sources, improving the quality of livestreams. To help creators monetize their work, Twitter has added pre-roll ads to its Amplify Publisher program that will enable select broadcasters to add ads to their broadcasts.