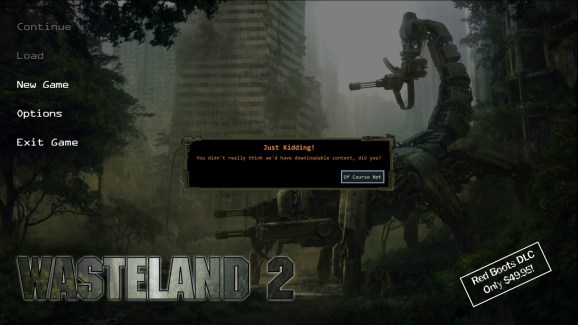 Wasteland 2 is getting a sequel.

Wasteland 3 is happening, and developer InXile is promising even more improvements and features for this trek into the postapocalyptic desert. Like with Wasteland 2, InXile is aiming to crowdfund Wasteland 3. The company is asking for $2.75 million on microinvestment platform Fig, which InXile cofounded, that will give supporters a financial stake in the game’s success. That campaign will go live October 5, and that’s when InXile will reveal its plan. Wasteland 2 debuted September 2014 after it generated $2.93 million in contributions on the crowdfunding platform Kickstarter. After releasing a Director’s Cut in 2015, InXile wants to get back to the role-playing franchise. Wasteland 3 will hit PlayStation 4, Xbox One, PC, Mac, and Linux simultaneously, according to the studio.

It's true: #wasteland3 is coming! Revamped combat, vehicles, and a frozen campaign for both solo and multiplayer! Back us @PlayFig Oct 5! pic.twitter.com/0bIASnsgp4

While fans have to wait until next week to help make Wasteland 3 a reality, InXile is providing some info on what its plans are for the sequel. For this new game, the studio is promising more party-based role-playing with an even larger focus on “story reactivity” and “strategic combat.” The combat of the second game is evolving to include vehicles and environmental dangers. Colorado will act as the new setting, and it will provide a frozen landscape that is difficult to survive in.

The potential biggest new feature in Wasteland 3, however, is cooperative play.

“Play by yourself or with a friend in story-driven synchronous or asynchronous multiplayer,” reads a press release. “The core of Wasteland 3 will still be a rich single-player experience. If you play with a friend while both online together, you’ll be able to share many missions, and join up to hit key story beats, but you can also split up and cover more ground. Once a game is started, you can play Wasteland 3 while your friend is offline, and do a lot of missions without them.”

InXile also warns that your choices in those missions will have an effect on your friend’s experience even if they aren’t online when you are. This means you aren’t just running through missions together in your own siloed instances of the world. Instead, this co-op mode is a way for you to shape Wasteland 3’s story together with someone else.

Wasteland originally debuted in 1988 for the PC. It was a survival-RPG with a heavy focus on narrative. InXile revived the franchise with the Kickstarter campaign in 2012. After more than two years of development, Wasteland 2 debuted to acclaim from fans. And now InXile is continuing that strategy. InXile is also working on Torment: Tides of Numenera, a spiritual successor to 1999 RPG Planescape: Torment, for a 2017 release after crowdfunding $4 million in March 2013.