Yogg-Saron’s evil reign may finally be at an end.

Blizzard has announced changes to seven cards in Hearthstone: Heroes of Warcraft, its popular digital card game for PC and mobile that generates more than $20 million a month from in-game purchases. These nerfs (a term used to describe balance changes that make something less powerful) can make Hearthstone a more fair game, both for casual players and the competitive esports scene. The balances will come out with the 6.1.3 update, which Blizzard plans to release before the Last Call events (named so because they are the last chance for players to qualify) for the Hearthstone Championship Tour, which start on October 8.

Many of the nerfs affect cards introduced with the original game back in 2014, like the neutral minion Abusive Sergeant (a must-include card in aggressive decks), Warrior’s Execute (a cheap removal option), and the Shaman’s Rockbiter Weapon (a spell that grants an attack to your hero — or adds damage to your weapon or a minion). Some of the updates make cards more expensive, weaken their stats, or adjust their abilities. Abusive Sergeant, which gives a minion a +2 to attack, now only has 1 attack instead of 2 (making its total attack value 3 instead of 4). Execute and Rockbiter Weapon, which previously cost 1 mana each, now cost 2 mana. 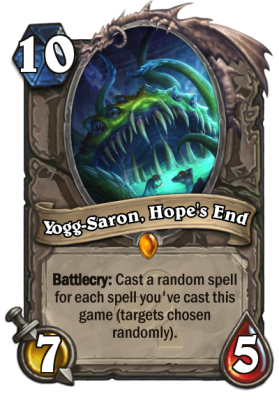 The most significant change comes to Yogg-Saron, Hope’s End, which is much newer than those three cards. Yogg is less than a year old, coming out as part of the Whispers of the Old Gods expansion. That Old God card would cast a random spell for every spell the player had used in that match. While many love the card for its randomness, it surprisingly appeared in many professional decks. Pro gamers would play Yogg as last-ditch hope for victory. This frustrated fans, who felt that Yogg’s randomness was ruining the competitive spirit. Now, if a spell kills, transforms, silences, or removes Yogg back to a player’s hand during its effect, the card will stop casting additional spells. Of course, this has the downside of potentially killing a lot of decks built around Yogg-Saron by more casual players.

Along with Rockbiter Weapon, another powerful Shaman class card, Tuskar Totemic, is getting nerfed. He’s from The Grand Tournament, Hearthstone’s 2015 expansion. Tuskar Totemic would summon a random totem when played. Now it only summons a random basic totem. Basic totems are the same ones that Shamans can randomly make with their Hero power. They’re relatively weak compared to some of the best totems, which include ones that can generate cards and increase the attack of adjacent minion. Tuskar Totemic could be an overly powerful card if he managed to summon a non-basic totem. Now he’s more reasonable. Many fans consider Shaman too powerful, but these changes could bring the class back in line.

The Hunter spell Call of the Wild is one of the newest cards to get a change. It used to summon three powerful beasts for 8 mana, but it now costs 9. Being able to play such a strong card so relatively early had made Hunters a stronger class since Call of the Wild came out with the Whispers of the Old God expansion. We’ll have to see if it still has a powerful impact on a deck with the increased mana cost.

Charge, the Warrior spell, is the last card in the nerf pile. It previously cost 3 mana and gave a minion +2 attack and the Charge ability, which allows them to attack right away. Now it costs 1 mana, but it doesn’t give a minion an attack bonus. Minions hit with the card also can’t attack heroes now, which gets rid of a lot of the combo potential for the spell — specifically, those that could kill players in a single turn, like with the OTK Raging Worgen deck.

Introducing a single change to a card can have a big impact on a game like Hearthstone. Cards don’t exist in a vacuum. Players create decks and strategies built around synergies and combos. A change as simple as increasing the cost of something by 1 mana can make an old combo or deck archetype no longer viable.

However, many fans were hoping to see some shakeups. Hearthstone’s current meta favors a few powerful decks, many of them aggressive and fast-paced. Slower decks have been struggling. These changes will shake up the scene, which could allow for new types of decks and strategies to become successful.