Summer is over, and as young people turn their focus to homework and the sun spends less time in the sky, interest in the massive hit Pokémon Go is fading.

People searched for “Pokémon Go” on Google one-tenth as many times the week of September 18 compared to the peak of the mobile game’s popularity during the week of July 10, according to the Google Trends tool. Developer Niantic released the Google Maps-powered augmented reality monster-catching game in early July, and 500 million people have already downloaded it on iOS and Android. With that unprecedented surge in adoption, the game has a long way to fall in the $36.6 billion mobile gaming industry. But even with fewer people searching for news and info about Pokémon Go, it is still generating five times as many Google queries as developer Supercell’s popular head-to-head strategy brawler, Clash Royale.

Searches did perk up this week for Pokémon Go because of an update that went live September 25. The app now shows where you captured your pocket monsters. Players can also use certain items with the Pokémon Go Plus wearable accessory. That’s not a major content update, but interest is up slightly. 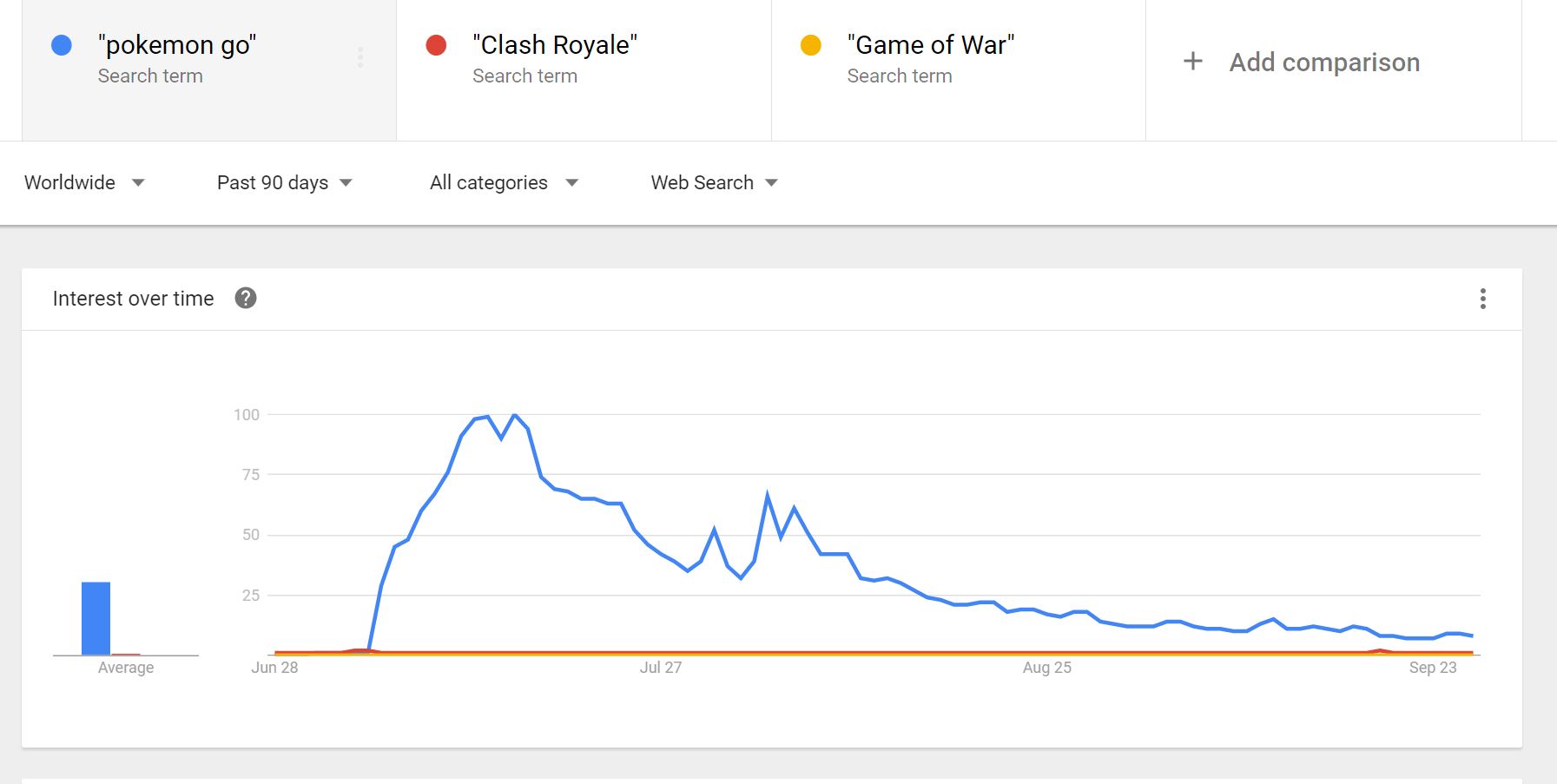 Above: Niantic’s app has lost some momentum, but it still has a relatively healthy and curious audience.

Pokémon Go broke a number of records over the summer. It was the fastest app ever to $500 million in revenues and 500 million downloads. It was also a media sensation. The huge interest led to it showing up in headlines repeatedly for weeks. That fervor has broken, and it’s even slipping in terms of revenues.

After spending weeks at the top of the chart, Clash Royale out-grossed it for a few days last week. Now, publisher Machine Zone’s (MZ) Game of War and Mobile Strike are outperforming it on both iOS and Android.

Of course, “outperforming” in terms of revenue doesn’t tell the whole story. Machine Zone uses television ads and other marketing techniques to acquire new players. The company has an ongoing marketing campaign that features celebrities like Arnold Schwarzenegger pitching their apps. All of those costs put a huge dent, worth millions of dollars, into MZ’s profits.

Niantic, on the other hand, has spent a minimal amount on user acquisition. The Pokémon Company has produced some promotional videos and posted them on Twitter, but those have not appeared on television, according to commercial-tracking intelligence firm iSpot.tv.

And The Pokémon Company hyping up the app is not the same as Niantic paying for user acquisition. So in terms of Pokémon Go’s overall health, it is still in a strong position that gives the developer a lot of room to maneuver with either advertising campaigns, regular updates, or cooperative promotions with The Pokémon Company to get players excited all over again.