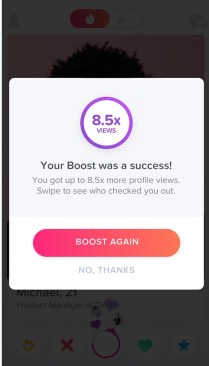 In a nutshell, Tinder Boost serves kind of like Google Ads or Twitter’s Promoted Tweets insofar as a user pays to be featured as one of the top profiles in their area, elevating them above mere mortals. It will perhaps serve well for those who don’t have a great deal of time to sit around waiting for matches, as it promises to garner as many as ten times more profile views.

As with many of the company’s early-stage features, Tinder Boost is currently being trialed only in Australia for now, but given that it has been publicly announced, it will likely reach prime time globally in the near future.

Launched in 2012, Tinder has become the default hook-up app for millions of people around the world, with users swiping right or left to indicate whether they like the look of someone. In 2015, the company introduced a new subscription service, letting people pay $20 / $10 per month (over-30 / under-30) for additional perks, such as being able to connect with people living in other cities. Assuming Tinder Boost becomes a permanent fixture, those on a Tinder Plus subscription will receive one free boost per week, while anyone can buy a boost at any time.

Tinder hasn’t given any indication as to how much an individual boost will cost, but part of its experiment in Australia will likely be to play around with the pricing. The company probably won’t want to make boosts too cheap though, because everybody would then pay for boosts and defeat the purpose of being highlighted.

Today’s news comes hot on the heels of another notable development at Tinder Towers, as the company announced a hook up with Spotify last week that lets users find potential matches based on a shared taste in music.