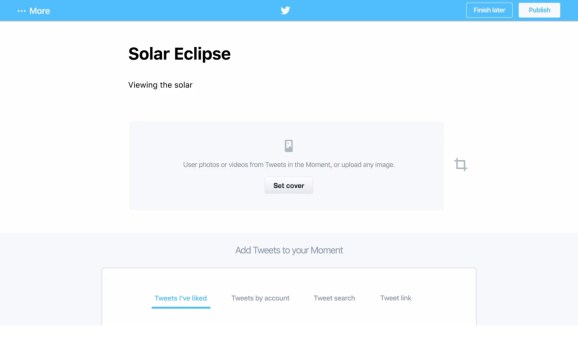 Twitter Moments — those collections of tweets about certain subjects, often the ones that are in the news and are being discussed by lots of users — now make a lot more sense.

Today Twitter said that it’s starting to roll out the ability for any user to make their own Moments in the app’s web client. The feature is coming soon to Twitter’s mobile apps. A video — in a tweet, naturally — shows how the process works on desktop.

For everyone who wants to make a Moment – starting today you can! Creators everywhere can now tell stories with Tweets. pic.twitter.com/ZJtNBoTPWf

Until now Moments have been editorially curated, presumably by Twitter staffers, and being included in a Moment was considered an achievement. It won’t have that effect anymore because it’s been democratized. But then again, that may have an upside, because it will allow anyone to make their own content on other people’s content. Twitter started going down this road in August when it started letting “select influencers, brands, or partners” make Moments. Now anyone can do it.

Twitter has promoted Moments even ahead of users’ notifications and direct messages in the web client. That gives a sense of how important the feature is to the company, which introduced it about a year ago. The project was initially known as Project Lightning.

The change comes after reports that Disney, Google, and Salesforce have looked at acquiring Twitter.

OK, gotta go and make my own Moment, catch ya later.