A new day for Hearthstone: Heroes of Warcraft is coming, and we’re trying to make sense of it.

Blizzard announced Wednesday that it’s weakening seven of its digital card game’s strongest minions and spells in an update that will hit sometime before October 8. Changes to even a single card in Hearthstone can have a huge impact, since cards work together to create synergies, combos, and strategies. Nerfing seven of them can remake Hearthstone’s landscape. Entire deck types could lose popularity, enabling others to rise.

Changes like this are exciting for casual and competitive players. It’ll shake things up, setting up an era of discovery and rediscovery as everyone tries out new strategies. Keeping players happy is important for Blizzard. Hearthstone made $20 million a month from in-app purchases on PC and mobile back in August 2015. We don’t have a more recent number, but Hearthstone has remained popular. However, fewer players will buy new packs of cards if they feel that the game is unfair.

GamesBeat examines each of the nerfs, detailing what they mean for the card and pondering if the newer, weaker versions will still have any uses. 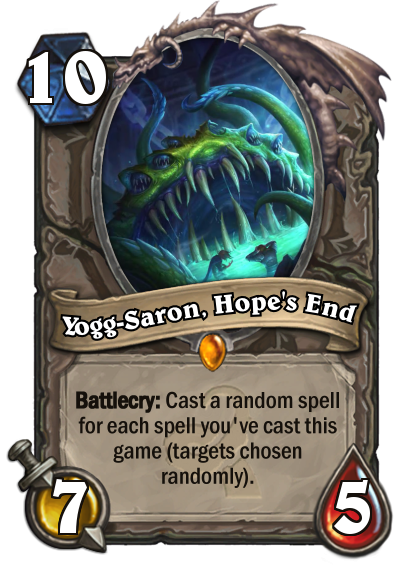 Let’s start with the most controversial nerf. The actual card for Yogg-Saron, Hope’s End won’t changed, meaning the actual text. It will still say that playing Yogg will cast a random spell on random targets for each spell that you’ve cast in a match. However, Yogg will stop casting spells if he dies, is silenced, or is removed from the board.

And there’s a decent chance of that happening.

A lot of spells can kill a single minion, or even all of them. What this means is that you can no longer count on Yogg to cast as many spells as you did. He may immediately kill himself, making him a waste of a 10 mana turn.

Blizzard always intended for Yogg to be a silly, fun card. But many (even in the competitive scene) were including him just because he gave losing players a chance to turn things around. Sure, he could end up killing yourself, but it’s worth the risk if you’re already losing that late in the game. This nerf will make him much less likely to swing a game like that. Yogg decks will go from “competitively viable” to “just for the laughs.” Still, some players are upset. Playing Yogg had a big entertainment factor, since he could trigger dozens of spells when played. That’s now much less likely to happen.

This is a welcome change on the competitive scene, where professional players and viewers had complained that Yogg was an unfair card with too much randomness. It’s hard for a game to promote skill when a losing player can use a single card and magically turn a loss into a win. 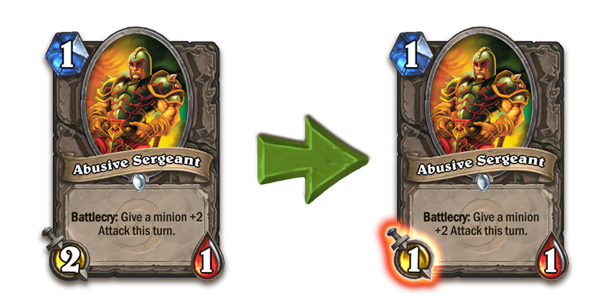 Abusive Sergeant wis one of the most popular aggressive cards in the game, appearing in just about every fast-paced deck. For a single mana, you can put a minion on the board and make another card more powerful. Even just 2 extra attack makes a big difference in the early game. Even later in a match, Abusive Sergeant can give normally weak minions the capability to trade for an enemy card that’s normally out of their reach.

Abusive Sergeant still has this Battlecry, so he’s not going away. This nerf just makes him a less attractive option for players to use on their first turn, even if they can’t make use of the Battlecry. An early minion with 2 attack can trade for a lot of other cards on the second turn, but a 1 attack minion will often not be strong enough to take out another card.

This is a reasonable nerf. Abusive Sergeant’s Battlecry is still one of the most useful you’ll find. But it’ll no longer be a good option to play on your first turn. You’ll be ditching an Abusive Sergeant more often in the mulligan phase. 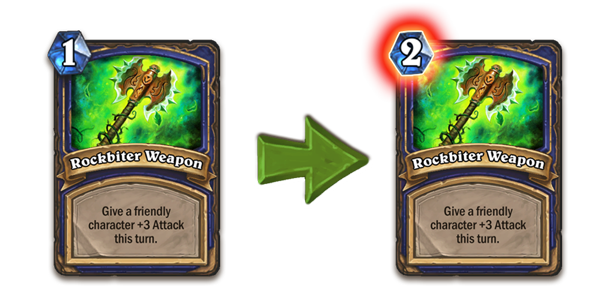 Shaman has been the most powerful class in the Standard format, thanks to cheap, powerful cards like Rockbiter Weapon and Tuskarr Totemic (we’ll get to him next). This is a versatile spell. It can make a minion more powerful, which (like Abusive Sergeant) can enable them to trade for an enemy that’s normally out of their reach. You can also use it on your face, allowing you to take out an enemy minion with 3 or less health or attack an opposing player.

That’s an insane amount of value and flexibility from a 1 mana card. Making it cost even a little more makes sense. This is a fair nerf that will hopefully bring Shaman a little closer back to Earth. 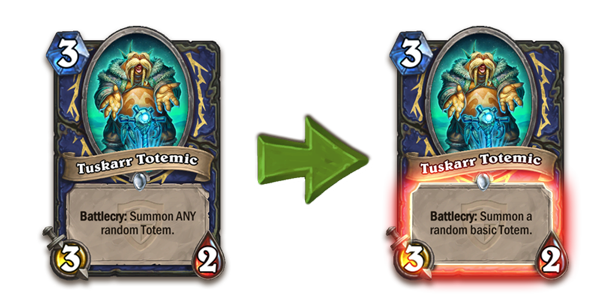 Tuskarr Totemic is another overpowered Shaman card. Tuskarr Totemic summons any random Totem. That includes the basic units that Shaman could get from their Hero power, which are relatively weak (0/2 with Taunt, 1/1 with no effect, 0/2 and +1 Spell Power, and 0/2 and heal every friendly minion for 1 health at the end of the turn). But that also includes more powerful Totems: a 3/4 minion, a 0/3 one that gives adjacent minions +2 attack, and a 0/3 minion that draws a card at the end of the user’s turn.

Playing Tuskarr on turn 3 and getting a Totem that isn’t basic is an incredible play — unfairly so, really. A little less than half of the time you played him, Tuskarr could help you outpace your opponent. Soon, he can only summon one of those four basic Totems. This is a lot more balanced. Playing one card that summons another minion is still a good play, especially spells and minions that buff Totems.

Hearthstone is a card game, so it’s impossible to do away with randomness completely. However, Blizzard can lessen the gap between “bad” and “good” randomness. With a card like Tuskarr Totemic, getting a good result was so common that even getting a mediocre one would feel bad for players. It was even a problem in the competitive scene. Entire games could be decided if a Shaman pro got a good random Totem early in the match. Now, the card still has a random effect, but the results are within a similar range of card quality.

Call of the Wild 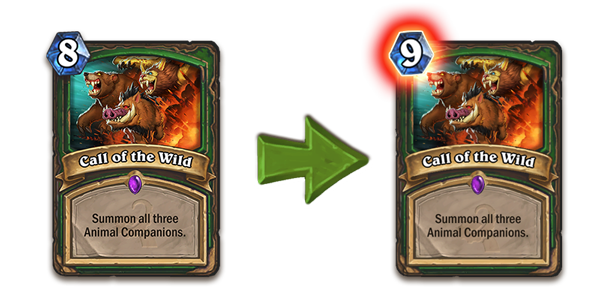 Above: Call of the Wild.

Call of the Wild is one of the newest cards in this batch of nerfs, debuting in the Whispers of the Old Gods set earlier this year. It summons three beasts, a 4/4 with Taunt, a 4/2 with Charge, and a 2/4 that gives other friendly minions +1 attack. This is a fantastic card. You put three minions on the board, one of which can immediately attack for 5 damage, while another can protect your face with a Taunt.

Any card that can help fill your board that late in the game is helpful, especially if those minions are powerful and have synergy with each other.  Giving such a strong card a 9 mana cost instead of 8 provides better balance. The effect is still powerful enough that Hunters will want to use the card, but it will give their opponents a better chance to establish their own board before they can play it. 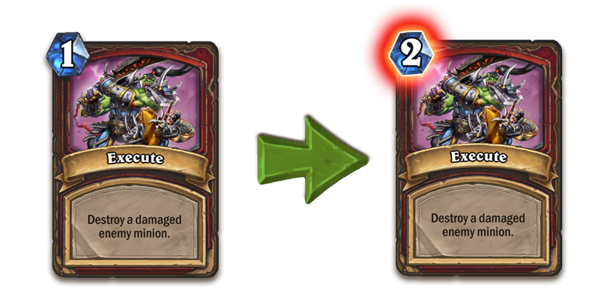 Execute is one of the best removal spells in Hearthstone, meaning it’s fantastic at getting rid of an enemy minion. All you have to do is damage them, and you can then kill them with Execute, no matter their health. And since Warrior has so many weapons and spells that can deal 1 damage, along with minions like Ravaging Ghoul that deals damage when it hits the board, you could almost always use execute when you needed to.

It’s ridiculous for such a powerful card to cost only 1 mana. In the late game, when you want to use Execute the most to counter an opponent’s 7, 8, or higher mana cost minions, the 1 mana cost practically feels like a freebie. Even this 1 mana increase will make a difference, forcing Warriors to have to choose between removing an enemy or playing a stronger minion themselves. 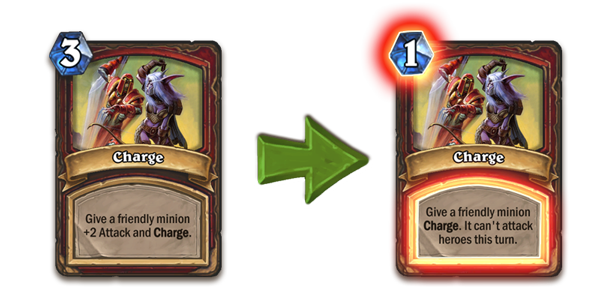 This nerf is specifically targeting a single combo, which was the basis for the OTK (one turn kill) Warrior deck. Players were using Charge with the Raging Worgen and other buffs to be able to attack their opponent’s face for obscene amounts of damage.

Blizzard has made an effort in the past to eliminate OTK combos and to make the Charge mechanic less prominent. We saw this before with Druid, which used to be able to use Force of Nature to summon three 2/2 minions with Taunt, buff them with other spells, and then kill their opponent with the overwhelming damage. Blizzard would nerf Force of Nature to remove Charge from the minions it summons.

This is a similar nerf, changing a card’s effect so that the developer could kill a combo. In this case, Charge will now pretty much be a completely new card. It costs less mana, but it no longer gives minions +2 attack. Also, while it still gives the Charge ability, the minion who receives that buff can’t attack the enemy hero the same turn.

It’s going to take some time to see if Charge has any use in the new Hearthstone landscape. Like I said, it’s now a different card. It’s useless for attacking an opponent’s face, but it can be used to clear enemy minions. And you can still use it with Raging Worgen to trigger it’s Windfury ability on its first turn. But other cards, like Cruel Taskmaster and Blood to Ichor, can do the same thing … and better. This basically turns other minions into Icehowl, a card that no one uses in Constructed. Out of all the nerfed cards, Charge is the most likely to fall into obscurity as a result of its change.