I wanted to start a war with America in Civilization VI. Instead, Theodore Roosevelt became my best friend.

One of the new changes to the long-lived turn-based strategy series (25 years and counting, with 33 million copies sold) is the addition of historic agendas, which you’ll get a chance to experience when it launches October 26 for PC and Mac. These are a set of guidelines for how a great leader behaves over the course of a game, and Roosevelt’s is the Big Stick, the embodiment of his approach to how he governed U.S. foreign policy as president.

Playing as Norway’s Harald Hardrada, the last great Viking king, I thought I’d see just how big ol’ Teddy’s stick was. But as the match progressed, it turned out I wouldn’t be America’s greatest enemy — I would be its staunchest ally.

I picked Hardrada because of the Norwegian’s capability to raid cities, districts (another new-to-Civilization VI feature, in which your burg spreads out with areas dedicated to your military, faith, economy, and more), and units like settlers and workers. I figured this would help me provoke Roosevelt into action, as he wants to see stability on his continent and doesn’t want you messing with any city-states (small independent kingdoms that you can conquer or woo) or Civilizations in his sphere of influence.

However, what happens when … his sphere of influence is an island without any competitors or city-states? That’s the quandary I found myself in, as I decided to play an island map to make better use of Hardrada’s benefits and the coastal-raiding capability. But this backfired on me like a blunderbuss. 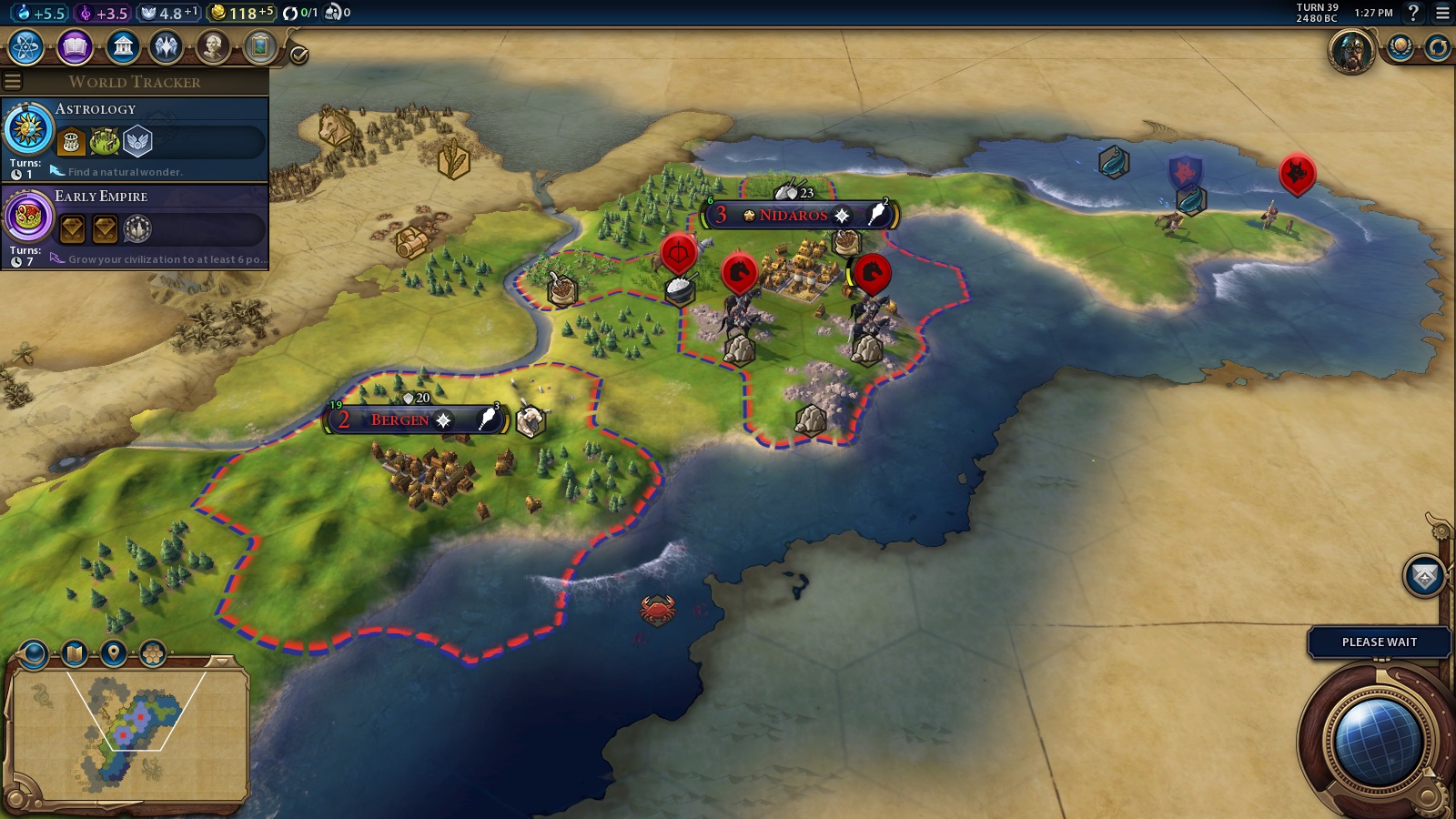 Above: Those barbarians were a major nuisance early on — especially since their mounted troops were stronger than my own.

I sent out my Viking longships to pillage, but I found few targets. Sure, I met some new Civilizations — Tomyris’ Scythian Empire and King Philip II’s Spanish Empire, along with a few city-states. But few of these provided ripe targets, and those that offered enticing opportunities were just too strong for me to take out. I couldn’t afford to launch a war because for a sizable chunk of the early game, I was busy defending my nascent empire against barbarians, who kept spawning near me with units stronger than my warriors.

As my longships explored, I blundered upon Washington, D.C. A few turns later, Roosevelt (who looks like he’s lost some weight since Firaxis last showed off Civilization VI) offered to send a delegation to my capital, Nidaros. Needing every little bit of gold I could muster, I heartily accepted. This first olive branch led me down a path in which Teddy went from my target to my best friend.

I could’ve left it here, but Roosevelt kept coming to me with offers to trade. Open Borders was the first, enriching it with a small gift of gold. I couldn’t turn that down. We next ended up swapping extra strategic resources — horses I didn’t need for an extra iron and some gold of his. 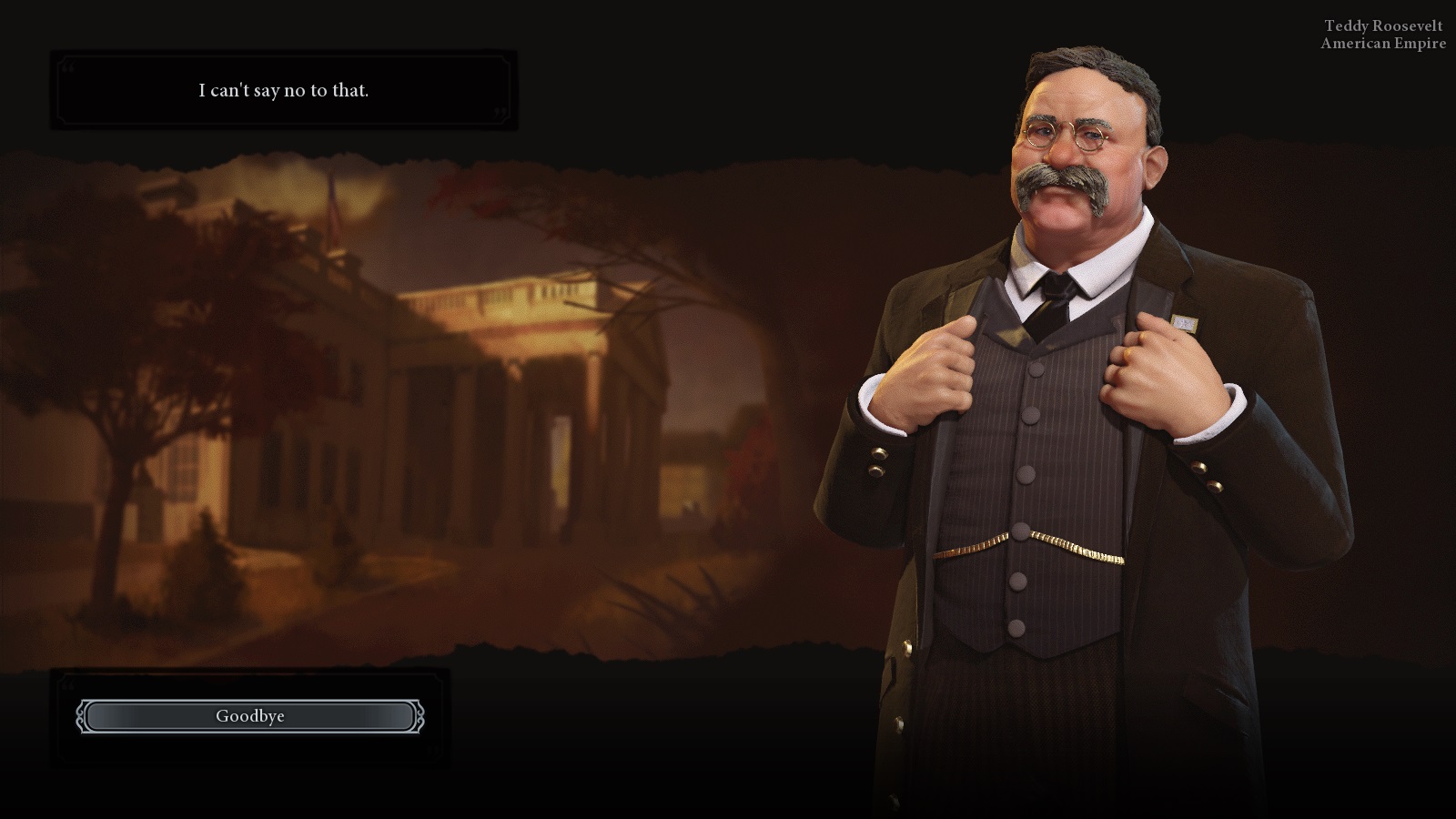 Above: And I can’t say no to friendship with America.

Then he came knocking at my door offering his friendship. My earlier plan in shambles, I shook hands with him with a hearty “Bully” to seal the deal.

The one constant in my decades of experience with Civilization is that the plan in which I bring to every new match tends to die not long after I set the game’s parameters and hit the start button. I’ve found it’s your capability to respond to the moves and plots happening around you that helps you advance in designer Sid Meier’s most famous series.

So instead of poking Roosevelt until we found ourselves in a war, I’ve decided on a new plan: eliminating Scythia. Tomyris’ civilization has spread across the island between America and my Norway, but we both have added a city to it. We both are stronger than Scythia, and I think we can take out this rival. All I got to do is find a way to get Scythia to declare war against me, and lean on my budding alliance with Teddy to bring in a powerful ally. We’re close to an alliance, and Scythia has denounced me for my support of city states. I think I can tip things into an all-out war with a few more actions that enrage Scythia (and thanks to their historical agendas, I can see what an empire doesn’t like).

And with Teddy and his Big Stick behind me, I’m confident my BFF will always have my back should war break out.