When Pokémon Go launched in July, it was nearly unplayable at times due to overloaded servers. Now, Google is giving a look behind the scenes to show fans exactly why that was unavoidable.

Pokémon Go generated 50 times more traffic on Google’s Cloud platform than developer Niantic was expecting, the company said today. The location-powered monster-catching augmented reality app was so popular that it was pinging the cloud 10 times more often than even the worst case scenario that Niantic and Google could possibly conceive of prior to launch. Eventually, after spooling up tens of thousands of cores in the cloud, Google and Niantic were able to meet the demand, and that pushed Pokémon Go into becoming the fastest ever mobile app to generate $500 million from the $36.6 billion gaming industry on smartphones and tablets.

Luke Stone, the director of Google’s Customer Reliability Engineering team, wrote a blog about his experience working with Niantic on this monumental task. And to illustrate just how unprepared Niantic and Google were for your Pokémon Go thirst, he shared the following chart: 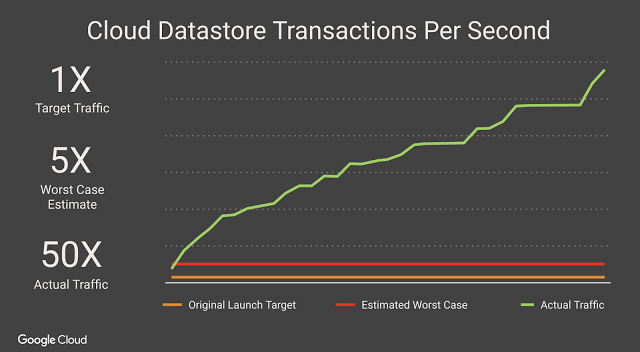 Above: No wonder Pokémon Go crashed.

“Throughout my career as an engineer, I’ve had a hand in numerous product launches that grew to millions of users,” writes Stone. “User adoption typically happens gradually over several months, with new features and architectural changes scheduled over relatively long periods of time. Never have I taken part in anything close to the growth that Google Cloud customer Niantic experienced with the launch of Pokémon Go.” 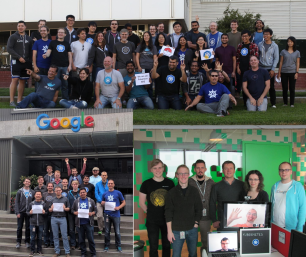 More than 500 million people have downloaded Pokémon Go, and throughout July and August, it had an average of 20 million daily active players. These numbers eclipsed competing games like Clash Royale, and more people were playing the pocket-monster-catching simulator than were using apps like Tinder. Google was able to handle that load because it was able to quickly adapt with the latest technology.

Niantic worked with Google to provide more capacity, but the companies were also wise enough to deploy the game using the latest version of the Google Container Engine, which is a tool for managing and updating clusters of data around the world quickly and easily. Stone also explained that the two companies worked together to implement a faster protocol for handling secure HTTPS traffic.

“The lessons-learned from the U.S. launch — generous capacity provisioning, the architectural swap to the latest version of Container Engine, along with the upgrade to the HTTP/S Load Balancer — paid off when the game launched without incident in Japan,” Stone explained. “[For that release], the number of new users signing up to play tripled the U.S. launch two weeks earlier.”