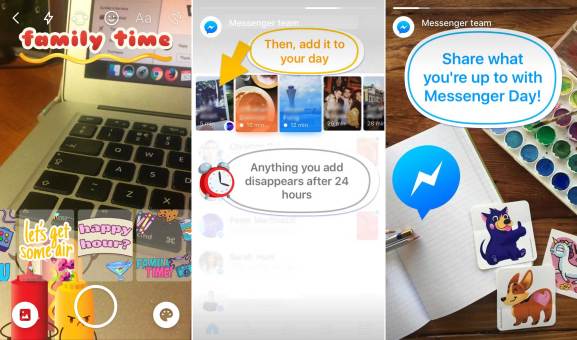 Facebook is testing Snapchat features in Messenger called "My Day". Tests are being conducted with users in Poland.

Facebook once tried to buy the company formerly known as Snapchat for $3 billion. After getting rebuffed, the social networking company opted to find ways to compete against the ephemeral messaging app, even repeatedly launching experimental apps to see which ones would gain traction among its users. It seems that something must have clicked because some of Facebook’s tested features have started to stick on its established apps, starting with Instagram, and could very well be coming to Messenger.

Users in Poland have started to see elements of Snap’s stories feature pop up in their Messenger service. Called “Messenger Day,” you can create ephemeral stories that last for 24 hours; it also offers privacy controls, which allows you to specify who can see your latest rant.

A Facebook Messenger spokesperson confirmed the tests, providing this statement: “We know that people come to Messenger to share everyday moments with friends and family. In Poland, we are running a small test of new ways for people to share those updates visually. We have nothing more to announce at this time.”

With “Messenger Day,” there are more than a hundred stickers to choose from with no Snapchat-like features. Users that are testing this feature out say there’s no current way to opt out from accessing it. When you compose a photo, you can draw and write on it before publishing it to your story.

Sure, people will say it’s a copy of Snapchat Stories (we say it in a headline), but that isn’t necessarily a bad thing, right? Instagram’s Kevin Systrom admitted to the practice, and in a way it’s giving credit to those that have done it well. It’s an effort by Facebook to have more of its massive digital properties take on the growing behemoth that is Snap and its 60 million monthly active users in the U.S. and Canada.

It’s not surprising that companies run tests like these, because what happens if they don’t work or people just don’t like them? So while some of the more than 1 billion users of Facebook Messenger might wish for “Messenger Day” to be available, there’s a chance that the feature never makes it to production. In the meantime, you could just use Instagram Stories. However, should it see the light of day (no pun intended), it helps Facebook further grow Messenger’s importance as a communication platform, one that already accounts for 10 percent of all Voice over IP (VoIP) calls worldwide.

Updated as of 11:39 a.m. Pacific on Friday: Corrected name of feature from “My Day” to “Messenger Day”.