HTC is launching the Viveport app store on a global basis for virtual reality fans.

HTC is the maker of the HTC Vive, the $800 VR headset that enables “room-scale” experiences. The Viveport store, which previously was open only in China, is a way to highlight some of the best experiences available on the Vive, and it will coexist alongside similar stores, such as those run by Oculus, Valve, and Samsung.

Rikard Steiber, president of Viveport, said in an interview with GamesBeat that the Viveport store will be open, meaning it will accept titles from other stores and platforms. And it will not force developers to place their apps exclusively in the Viveport store, Steiber said.

“Viveport is the place where people can start their journey to virtual reality experiences,” Steiber said. “We launched in China earlier this year. We are happy to roll this out globally with some of the best creators in the industry. Our vision is to establish Viveport as the platform for virtual reality.”

Some of the premier titles in the Viveport store include an updated Everest VR, a new edition of theBlu, Google Spotlight Stories’ Pearl, The Music Room, Stonehenge VR, Lifeliqe, and more. All told there are 60 titles in the store, including a dozen that have been available only in Asia. All told, Steiber estimates that there are 500 or 600 VR titles available across the industry. About 90 percent of those are games.

Viveport will highlight games, but it will also have categories in art, creativity, education, museum, 360 videos, and other categories that can help convey the broad variety of immersive content that people can experience in VR, Steiber said.

To promote the store, HTC is holding a 48-hour sale during which several hit titles will be available for $1. The discounted titles include theBlu, Mars Odyssey, and Firebird: La Peri.

“We want to make it very frictionless to come to Viveport,” Steiber said. “You can get quality titles. It’s hand curated.” 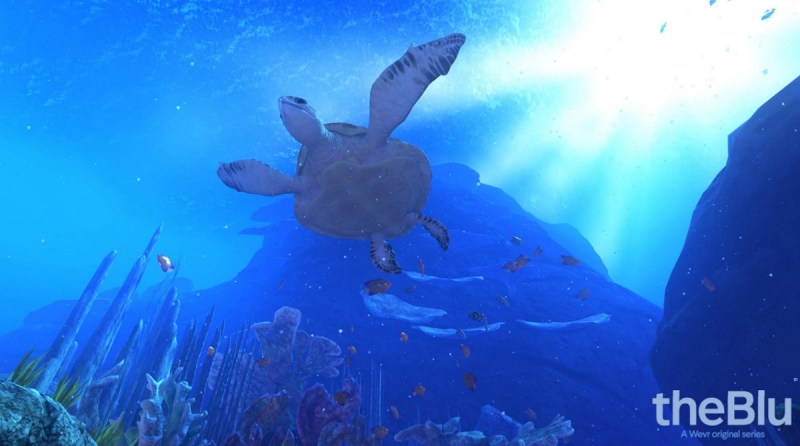 “Vive is a leader in VR and we’re excited about the Viveport release, as we bring a new version of theBlu to VR fans everywhere”, said Neville Spiteri, CEO of Wevr and maker of theBlu. “We can’t wait to see new and existing customers try out theBlu, Gnomes and Goblins, and some exciting upcoming titles on Viveport.”

The store has no Oculus VR titles yet, but Steiber said to stay tuned for news on that in the future. The Vive will get more competition in October with the launch of the PlayStation VR headset from Sony, which debuts on October 13 on the PlayStation 4.

“I wish them the best of luck,” Steiber said. “It is important that VR be successful on game consoles and mobile. We’ll have more consumers coming on to experience VR. That’s good for the ecosystem.”

Steiber’s team is based in San Francisco, where it’s easier to find the intersection of technology and content, he said.

HTC also released a cryptic statement in its press release below:

“And one more thing,” said Steiber (note the clues in a puzzle in the highlighted words). “Any day now, we will relay a secret message that will reopen a path to unlimited Viveport content for worthy contenders. We hope you will follow us on social media, install the VIVE software, visit Viveport.com, and explore Vive Home over the next month, as we unveil more clues and keys to unlock the treasures.”