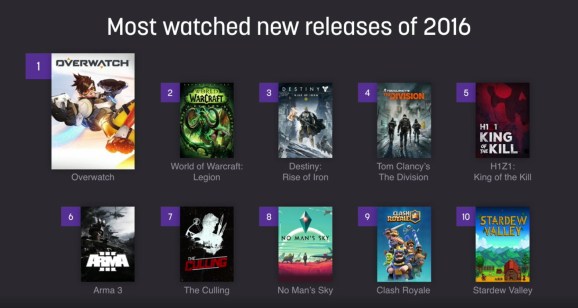 Overwatch’s place at the top isn’t a huge surprise. The team-based shooter for PlayStation 4, Xbox One, and PC launched in May and already has over 15 million players as of August. The interest has led to a fledgling esports scene as well, and Twitch is critical to this, since that’s where most people watch live gaming competitions.

The other games on the list represent a nice range, including online role-playing games like World of Warcraft: Legion, shooters like Destiny: Rise of Iron and The Division, independent games like Stardew Valley, and even a mobile game with Clash Royale.