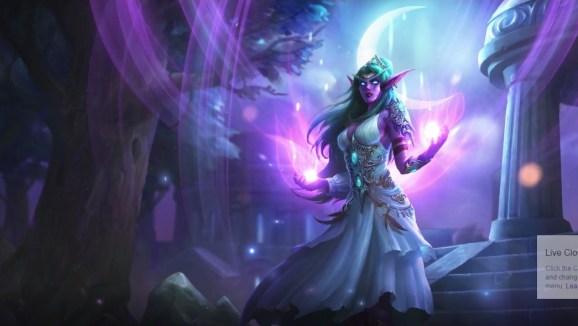 It’s prime time for Hearthstone’s Priest class. On Amazon, that is.

Onstage today at TwitchCon in San Diego, Hearthstone art lead Ben Thompson announced that players who sign up for the just-announced Twitch Prime product will get a new hero portrait for the Priest in the category-leading digital card game. The partnership is a sign of just how big Blizzard’s free-to-play app has become — it has more than 40 million registered players, and it’s drawing upon that group to make a big deal with a leading online retailers.

“When Twitch talked to us doing something fun for launch of Twitch Prime, we were onboard,” Thompson said.

Tyrande Whisperwind first showed up as a major character in Warcraft III: Reign of Chaos in 2002. In the massively multiplayer online role-playing game World of Warcraft, she’s the leader of the night elf race along with her husband, the Druid Malfurion Stormrage.

Hearthstone adds new hero skins every now and then. So far, Mage, Warrior, Hunter, and Shaman have received alternative portraits. The last added was Morgle the Oracle, a Murloc who replaces Thrall as Shaman, in July.