Lisa Joy: One thing I will say, in terms of implicit bias, everybody has one. That’s one of the things that is helpful to recognize about yourself if you’re trying to overcome bias. No matter how pluralistic you think you are, you come at things with a set perspective. Whether you’re talking about creation as creating a child and informing that child’s views, or creating a work of art, or creating technology, your own implicit bias is a transferable thing.

Question: Aren’t there implicit biases in every information source, in all of these tools? Twitter, I find, is a very versatile tool, but it can be used to enhance your own personal biases by surrounding yourself in the doomsday bunker with like minds who don’t challenge your perspective. The tool is shaped by the hand, to some extent.

Thandie Newton: I feel like the greatest control, the greatest power, comes from the fact that people don’t seem to have the awareness that they’ve been programmed, and that others have as well. They’re being steered in hidden ways by marketing and so on. If people tap into the awareness that their instincts aren’t necessarily just coming from their own personal code – that they’ve been programmed by stimulus, the nature/nurture thing—that’s the control.

It’s so incredible, just as a personal Twitterer, looking at some people’s feeds and people arguing and how much people take things personally. This person doesn’t know you. They don’t know anything about you other than these 140 characters. And they get into these fights that go on for hours. That suggests to me that they don’t have any awareness about the fact that they are not their thoughts. They are not their feed. That’s just ego.

That’s one of the things that was so beautiful about working on Westworld. By playing these robots, this artificial intelligence, you realize that we’re no different from people. It’s a metaphor in some ways. We are so still and present and powerful, but that’s just because we have one focus. We’ve been programmed to do one thing really well.

We could all be like that. Arguably, if you’re very successful in your field, it’s because you’ve found your focus. You’ve stripped away any baggage that stops you from improving your position and you drive forward. But there are so many people who get stuck in the personal, in the go, because they don’t realize they’ve been programmed to get irritated by Twitter, to hate that person. We’ve been fucking influenced to be that while other people, who are truly in power, are busy controlling the world while we argue with our lack of awareness and our complicated defensive egos.

Evan Rachel Wood: One of my favorite ways to use social media is to see the patterns, see the quotes that everyone seems to be using that they found from a news source. “Oh, this is repeating all over the place.” It’s obviously a program. You can find the consistencies and the patterns because you see the chain reaction and how it’s growing. It informs me on what to think twice about sometimes, to question if I’m being programmed or not because I see it in other people.

Wood: We wouldn’t be doing the show if we weren’t.

Newton: Yeah! But it’s funny, because we’re talking about technology, talking about artificial intelligence. What I’m fascinated about is intelligence in general, which comes from us. We’re obviously trying to mimic that, the way we program. You look at a plane flying and that’s inspired by things that really do fly, natural things. It’s amazing how people are influenced and how un-aware they are of that influence. That, for me, is where the real power is.

Jeffrey Wright: The miscalculation was more that these tools would usher in an age of information, rather than an age of misinformation. That’s the thing that, for me, was most surprising. We’ve just added to the chaos as opposed to any clarity.

Wood: We’re in an era of pull technology, of self-selecting reality now. When you watched the news to see what was going on, you had what you at least thought was a reliable narrator. You only had about five stations and two newspapers. There was a whole industry that pushed the same information out to people, and people received it and the accompanying debates. There was a certain level of moderating going on.

Wood: Yeah, there was a uniformity, a kind of fact base that was relatively uncontested. I’m not even making a judgment right now. I’m just explaining what I think is an interesting and very important change that’s happened. Now, if I don’t want to—it becomes very easy to become entrenched in your opinion. You pull your own news stories. You find your favorite websites and people to follow on Twitter.

Newton: And anybody who doesn’t like that threatens you personally. Which is insane.

Wood: It’s really interesting. Even fact-checking is difficult to—

Newton: It feels like there was a time when honesty was a moral code that people didn’t break without feeling bad about it. Without having a real conscience. But you look at the debate three nights ago, honesty is selective. Honesty is not something we all absolutely adhere to and assume that everyone else adheres to as well. It’s now part of the manipulation, whether you’re truthful or not. You can be dishonest.

What was it, in Tom Sawyer? A lie can get halfway around the world before the truth has got its boots on. It’s a tactic that’s now used.

Question: And knowing that people will lie to you because they lie to themselves.

Newton: Sure. That’s one of the most difficult lies to unravel.

Question: There’s an argument you can make that this is a show that’s very relevant to Silicon Valley, to the creators of technology. What would you say is the message you would send them?

Jonah Nolan: I wouldn’t say there’s a message. I don’t think the show is necessarily teaching anything. You have to be very careful.

Newton: It’s a fantasy, as well.

Jonah Nolan: First and foremost it’s entertainment. I think we’re asking, hopefully, interesting questions about human behavior, about our appetites, and about the moment that seems imminent and urgent, in which our creations begin to ask question of us. They begin to regard us. For us, that was the key jumping-off point for the series. It’s not about us talking about A.I. It’s about A.I. talking about us.

Newton: It’s a great way to pose those moral questions. 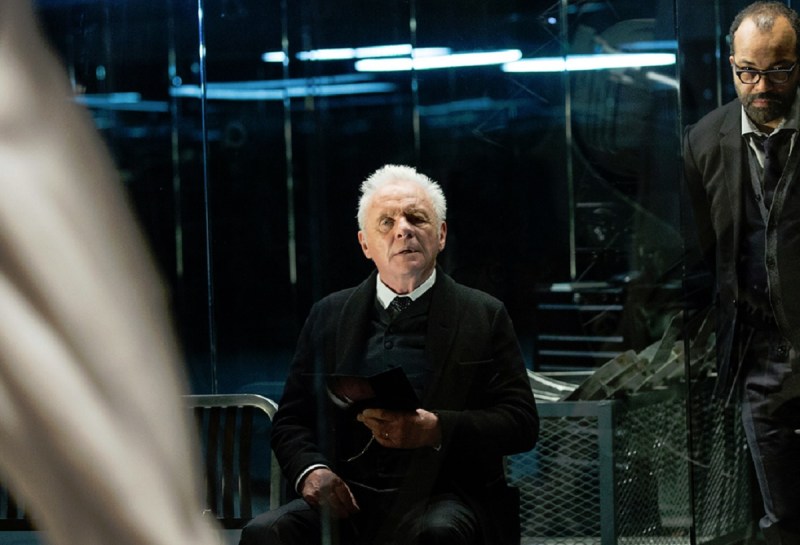 Above: Anthony Hopkins and Jeffrey Wright in Westworld.

Question: In preparing to play robots and a tech industry employee, what did you consult to get into your characters? Were there individuals who you thought your characters were like?

Wood: The Singularity is Near became my Stanislavsky actor’s handbook. [laughs] It did. I kept it in my trailer. It informed me a lot. You have to ask yourself different questions as an actor when you’re playing an artificial intelligence, a robot. You don’t work the same way, literally. There’s a whole deeper layer to it. The more I did research that way, the more I feel like — whether or not it’s obvious on screen — it informed the performance.

I talked a lot with Jonah and Lisa. They gave such beautiful direction in guiding us to where we needed to be. Having the knowledge and knowing the answers to a lot of the strange questions we had to ask. We called them “bot thoughts” on set. “I got a bot thought. Should I be squinting in the sun?” There are so many things you have to bring up.

Newton: But then you’re fucking told that no, they don’t blink overly. So you’re doing this thing in the sun — I swear to God, I could tell sometimes….

Newton: There was one scene where Evan and I have to stop in the street, and we look at each other, and we try to say something incredibly fucking important. I have to hear it, and it lands. And then we walk away, and we’re both just like—tears streaming down my face, just trying to keep my fucking eyes open, because it was so fucking bright. And we’re robots that don’t blink in the sun. We don’t have a problem with that.

I’m grateful for the opportunity to play these roles. It was so interesting to hear how other actors were playing every one of them, because none of this was real. This was fantasy. We’re creating a world that could go on for a very long time in parallel to our world. I just felt that the robots were innocent, like babies. They were beautiful. They were perfect. It felt like they were better than us, because we as adults are so polluted with information and confusion and whatever, whereas babies just—the clarity of thought and presence. The robots, to me, felt like that.

Really, what affects the robots, what makes them so beautiful and so perfect, is how they’ve been programmed. That’s reflected in human beings, to me, too. How a person has been influenced, what they’ve chosen to take on to them as important or not, how they’ve educated themselves, the experiences they look for in life, those are the measure of who you are. I think I said this one time, that I felt more exquisitely human as a robot. These characters are so clear, and it’s all down to the programming.

Wright: From my perspective, we used Jonah and Lisa as….