Question: Is Westworld a physical place, would you say, or a virtual place? To me the answer makes a huge difference. If this is a Star Trek holodeck, it’s a virtual place. You can do anything there. You’re encouraged to consider it pretend, and when you walk out it’s not there anymore. Just like how you can be in Grand Theft Auto. You can be very bad in Grand Theft Auto because there are no consequences. But if it’s a real, physical place and all this stuff has real consequences, this idea of no consequences is a lie, and I have a better feeling for how I should behave in Westworld.

Lisa Joy: It’s funny, because again, is morality a circumstantial thing or a personal thing? In that way, morality is something that’s based on rendering. How detailed is the image? Because you’re doing the same things. It’s just to one thing that’s more detailed and more lifelike than another. Your behavior is the same in both cases. If it’s one way in a video game, and then you have the game as a virtual reality, and then you have the virtual reality manifest in automatons playing out the exact same scene, does it suddenly become immoral because they become too lifelike?

Jonah Nolan: Part of the reason why there isn’t great outcry — there are some conversations about it. I’m conflicted about it myself. But there isn’t a great outcry about the morality of people playing video games because the simulations aren’t very good. They’re great compared to what we had when we were kids, but they’re still distinctly un-real.

Lisa and I had an experience when we went to talk with HBO about budget. We wound up getting put into a small room in their headquarters in Santa Monica, a windowless room, and we demo’d the HTC Vive about a year before it became commercially available. We were both kind of stunned by the experience, what we call “reality shock.” Here was the first simulation that felt so immersive and attractive and engaging that coming out of it to a windowless office — it was a bit like, “Oh, shit, I want to go back in.” 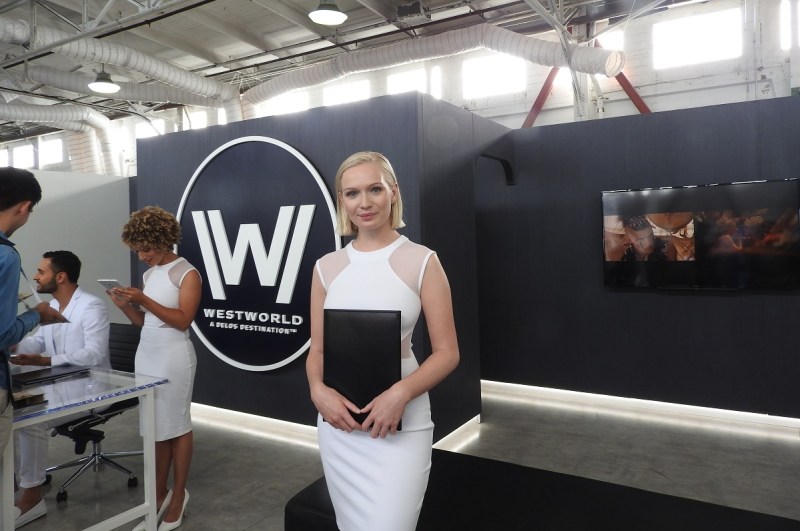 We were struck, on the drive home, by how much time our daughter spent in simulated realities versus base level reality. It was a very instructive, very interesting experience. With Westworld we’re looking beyond the immediate—VR is clearly poised now. It works. It doesn’t make you sick. It’s incredibly immersive. It’s going to explode as the evolution of interactive storytelling. We were looking for the next step. You imagine that this story is taking place in a world where, if you have the means to do so—VR is what everyone else does. That’s basic. This is reality. That’s what they’re selling. Forget VR and come here, because it’s real.

That introduces a problem. Morality isn’t a problem in video games because the simulation—a character says this in the pilot. The simulation is poor enough that you don’t conflate the experience. In film and television, we struggle to make violence as real as possible. We look at visual effects shots and blood splatter and say, “Oh, it doesn’t quite look real, do it again.” We’re looking for verisimilitude, but that two-dimensional screen is a distancing devices. As our simulations get more granular, more perfect, we will be confronted with this problem. Now it feels too real.

The morality of what you do in that world becomes a lot more confusing when two things happen: when the simulation is indistinguishable from reality, and when the intelligence of the non-player characters you interact with eclipses a certain level. Then it’s much more problematic. Driving around in Grand Theft Auto and running over a bunch of pedestrians is happening right now.

Question: Asking the actors: Have any of you tried out VR?

Wright: I have, yeah. Just once. My son is trying to change all that. He’s insisting that his birthday’s coming up. But I had an experience at the U.N. about two years ago, which was mind-blowing. It was a virtual tour of Monrovia with an Ebola survivor, a walk through that experience. Her sickness and progress to recovery, and also the consequences of the epidemic on the city. It was staggering. The narrative I found a little concerning. It was a bit missionary in its tone, which reflected this weird judgment that these people survived because they’d been saved and those who didn’t survive hadn’t. But aside from that, it was very powerful. As a tool for empathy, in this case, it was seriously effective.

Newton: I was once asked if I’d be a voice for a new game, which was as immersive as things are these days. I was asked if I would be the voice of a Congolese woman, and the game was set in Bukavu, in the eastern DRC. The baddies were the different militia groups taking over towns – not raping women, although that’s what happens, but just horrible violence – and you were one of the aid workers, a relief team going in and killing people who were doing bad things, saving the communities.

This was a job offer to me because I work as a human rights activist. I’ve been to Congo fighting for women’s rights, ending sexual violence. Congo is a terrible place for that. When I questioned this, because it was one of the most revolting things I’d ever been asked to participate in — I couldn’t believe they had sent this my way, because they thought I would find it interesting and useful. They said the justification was that this would raise people’s awareness about what’s going on in Congo. I said, “But in an immersive experience where you’re shooting people?” It made no sense to me at all.

It was interesting thinking about how these immersive experiences are — we have to be so careful about the desensitization. If it’s virtually real — like Lisa was saying these are wonderful opportunities to teach, to communicate, to warn. But if they’re being used to desensitize, to isolate, to misinform people about what happens in different parts of the world, it’s just fucking terrifying, frankly.

Lisa Joy: Same thing with the show. We’re worried about the violence, the sexual violence, but you also have an obligation as a storyteller to raise awareness and show the horrors of that, so that people aren’t desensitized to it. I don’t think there’s anything titillating about what we’re doing. It’s all horrific, as it should be, in its context. 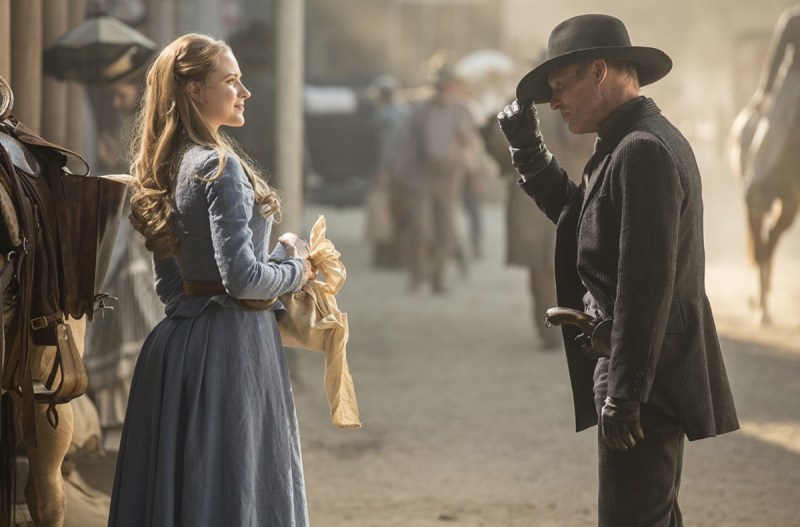 Newton: The context, but also the cost. One of the brilliant things about having these 10 episodes is we get to see the consequences and ramifications of this violence, the cost of this violence. We look at it from so many different points of view. The perpetrator. The person who’s affected by it. The people who are complicit by being around it. When do you ever really get a narrative where you get to see it from all those different points of view? That’s incredibly valuable. But the only way we can look at it is by showing it. That’s not literally showing everything, because I think the show is incredibly good at just hinting at things.

Newton: But you have a very strong sense. You notice — I read a review in the Hollywood Reporter that pointed this out, and I was glad that it did. It’s not about the special effects. It’s not about a lot of modern film technology. It relies on old-fashioned storytelling. The pace of it is beautifully traditional, almost. It’s relying on performance and character. All those things allow you to feel more, as opposed to lots of shocking bang-bang-bang and kinetic movement that just scrambles your fucking brain. This is gentle, but the message is strong.

What it asks you as an audience to contribute is very powerful, too. It’s not like, “We’ll show you this, and then distract you with something else so you forget you’ve just seen something so fucking disgusting.” You don’t have time to sit with it and process it and challenge it in your own mind. All those details, people don’t think about those things.

But it’s hugely responsible, sensitive filmmaking to, first of all, be brave enough to put this stuff out there, because it’s the opposite to what we want to promote, as a team. It’s brave to have that material there, and to allow both us and the audience time to investigate these things. I’m so grateful for that opportunity, as a participant and as a viewer.

Question: We probably won’t get a Westworld video game with a lot of shooting, then?

Jonah Nolan: It would be deeply ironic. [laughter]