GamesBeat: Do you think the indie community is more interesting in that respect so far?

Conn: We made a documentary called Gaming in Color, and it didn’t do very well. Part of it, I think, is that for queer gamers, they already know the story. I don’t know that queer gamers necessarily want to make a pride parade. The issue is, how do you get straight gamers to think that’s interesting and want to play it and see what it’s like? For now, queer people are like, “That’s my life. I don’t need to play a game about it.” And straight gamers are put off by it for whatever reason.

I hope there’s some way to cross that divide eventually. Pridefest could be popular because middle America is playing it. And it’s cute and fun, and you get to design a parade. But for now, we’re not there yet. And the gay gamer contingent is more hardcore. To them, it’s just trite or something. 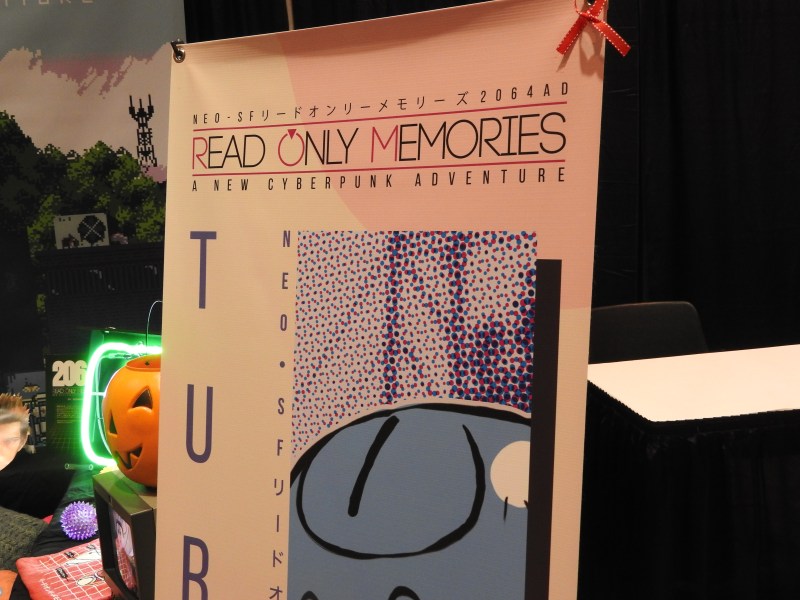 Above: MidBoss created Read Only Memories.

GamesBeat: Companies in the industry seem to have gone through a lot of positive steps. EA seems to be very proactive in making sure they have an element of fairness built into the organization, benefits for married couples and so on.

Conn: EA is very good, at least when it comes to [the] internal side of things. Their organization understands that the better they can support people in the workplace, they’ll have more motivated employees and people will want to work for them. I’d like to see them doing more work on the outside. I feel like their games have … to me, EA is very pragmatic. If it works, they’ll do it. They’re not going to push one way or another. But if that’s the way the world is now, they’ll adjust to it.

It makes sense. Again, it’s pragmatic. But because they are the largest third-party publisher in the world, I’d love to see them have more games that … I’d like to see them support more things like what BioWare does. BioWare is almost like an offshoot. I’d like to see more things coming from EA specifically. But that’s more of a small nag than any major gripe.

GamesBeat: Have you seen any studies of queer presence within the industry.

Conn: It’s tough. There’s a level of … at least within the industry, I’ve met a lot of people 35 and up who are — I meet them and they’re openly gay with me, but they’re not out at work. They’re at Sony or other Japanese companies, and they’re terrified because they remember what it was like 10 years ago or more when that was like a death sentence. I’ve heard all these stories about what it’s like at Namco Bandai or other places, where if you’re gay, that’s it, you’re out.

For a lot of companies, they can’t … these last five years have changed things quite a bit. It’s interesting that it hasn’t really reached the top yet, though. Video games are still a very conservative industry, especially the Japanese base.

GamesBeat: Would you say that LGBTQ issues are maybe a little behind other diversity initiatives?

Conn: Part of it is. I can’t understate because the core of the video game industry comes from Japan, and you have companies like … we see a lot of games from PlayStation. We have a lot of friends at PlayStation. Every year, I ask them if they want to be part of GaymerX, and every year they say, “Well, you know how it is. It would have to go up the chain. It would get to Japan, and they’re not going to like it.” We talk to Nintendo about including queer characters in Tomodachi Life, and they say, “We didn’t want to make a political statement.”

It comes from a very … the Japanese just don’t really understand the social changes going on right now in America. And because they have so much influence on the industry, that’s one of the blockers. 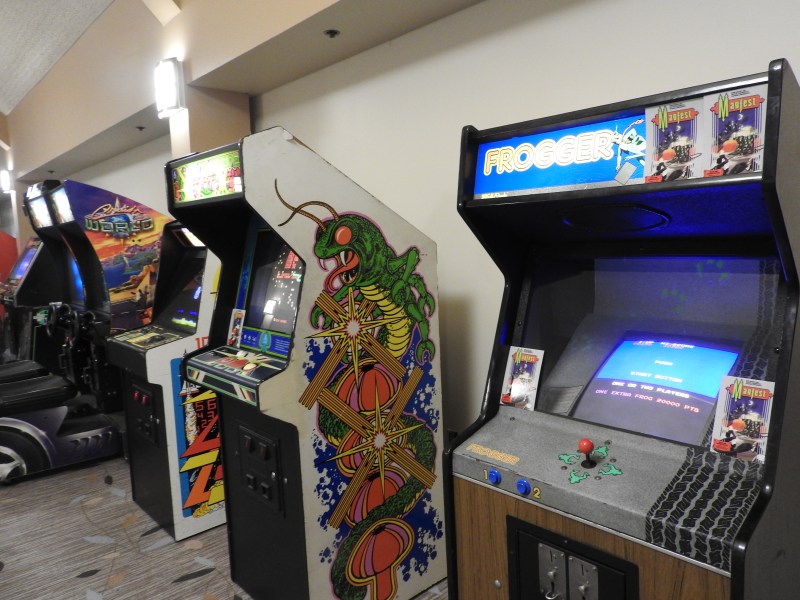 Above: Arcade games at GaymerX.

GamesBeat: You have a franchised event in Australia. Is there anything different that you see going on in other countries?

Conn: Australia is different in that they have a lot less. It’s not like America where we have this really nice rich tapestry of colors and races. It’s a little more homogenous. They have issues with diversity around indigenous peoples there. But in general, what they face in terms of LGBT issues and women in the games industry, it’s still the same fight.

The biggest difference is that Australia doesn’t have a lot of big game companies because of the way the tax system works. It’s mostly indies. When we had GaymerX Australia, almost all of the sponsors and booths were independent game companies. Indie developers are obviously a lot more open-minded. But GaymerX Australia was largely very similar.

We’re probably doing something in Europe in the next year or so. But I really want to do something in Japan. I feel like that’s the place where … meeting gay people in Japan is interesting because being gay in America you get a lot of abuse, but at least your existence is acknowledged. In Japan, it’s very much like, “We just don’t talk about it.” Queer people in Japan have some of the highest suicide rates in the world because they really believe there’s something wrong with them. They have no community.

Part of why we do this is to create that kind of space. We want people to know there is a space for them. I feel like, especially in Japan, I want people who are queer to know that there’s a place for them too.

GamesBeat: Did you say you’re skipping an event in 2017, doing some different things?

Conn: Sort of. We told people we were taking a break next year, but what we’re probably going to do … there’s this group called MagFest, a big arcade event, and they’re starting an event out here called MagWest. I went to their event a couple years ago, and I was really impressed. It was nothing like E3 or PAX. The soul was there. A lot of women, a lot of queer people, a lot of people of color. It was a very diverse crowd, but it didn’t seem like that was really their thing. They just built it into their community.

Like I say, I was really impressed, and I thought that if we were ever going to work with a bigger event, this is someone who gets it. We’re probably going to do something with them here as a test run. Part of it is so we can take our … we make games, and I really want to take our next project seriously. I want to take the time to build up our studio. And part of it is I’m a little [burned] out. I want to take some of the COO stuff and let them build the event, let them pay the bills, and I just come and put on some panels and stuff.

As bad as this may sound, I want to at least dangle the idea that this isn’t going to last forever unless the support is there. If we might not be here next year and people say, “No!” Then, we know that there’s demand.

GamesBeat: Are there any panels happening here that you’re particularly serious about?

Conn: Not this year. GaymerX 3 was my biggest concern. We had Anita Sarkeesian as a guest of honor. Gamergate was in full swing. I was worried about what would happen there. We beefed up on security, but it ended up that nothing happened.

Really, the biggest issue every year is that we have people — like, we had a Costco event going on next door. This year, we have the football thing. We’ll have all these people who don’t understand, and they come in wondering, “What are all these freaks doing here?” It sucks because this is a really cool place to be, a refuge where people can be like, “I’m finally around all the people I know on Facebook and Twitter. I can be my real self.” And then people come in, and it forces them back into the real world. 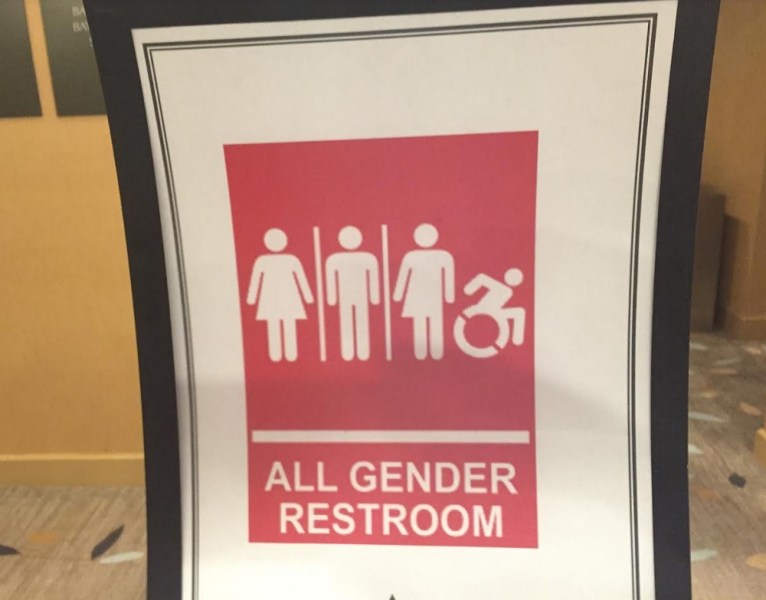 Above: Sign at the GaymerX event in Santa Clara, Calif.

GamesBeat: I noticed you had the signs on the bathrooms, which is probably a touchpoint for some people.

Conn: With the Costco event, we had the gender neutral signs, and the Costco people were going in and harassing our attendees. The whole bathroom thing is so messed up. They don’t create a scene, but they’re just like, “I don’t get it. Why do you need this?” It’s hard for people outside the community to understand how draining it is, every day, to hear, “Why do you need this?” Sure, you can explain it, but it takes a part of your energy. Here, you shouldn’t have to think about that.

GamesBeat: Is there a particular message you try to get out with the media attention you get at this time of year?

Conn: If you look around here, people on 4chan boards and all these different parts of the Internet, they have an idea of what this event looks like. They talk a lot about how it must be this liberal safe-space con where everyone’s scared to say anything, and everyone’s triggered all the time. And you look around here and everyone’s having fun. Everyone’s around their communities. This isn’t what people think it is. It’s people building a community and having a great time and making friends.

For a lot of people who are young and still figuring out who they are, they shouldn’t be afraid to allow themselves to be open to these kinds of things. The video games you love — if you’re really into shooters or whatever, there’ll always be a market for that. But there can also be room at the table for other things as well. Just because Gone Home is successful doesn’t mean you’re not going to have the next whatever. I hope people can be open-minded to the fact that we can all share in this love of digital everything.

It’s hard for people who can’t come here or aren’t willing to open their minds to something like this. It’s hard for me to communicate, “No, it’s not what you think it is.” It’s a very chill, very normal event in a way. It’s just a place where people can be themselves and present how they want. If they want to dress up as a character that might be a little weird or funny, they can do it, and they’re not going to have a hard time. 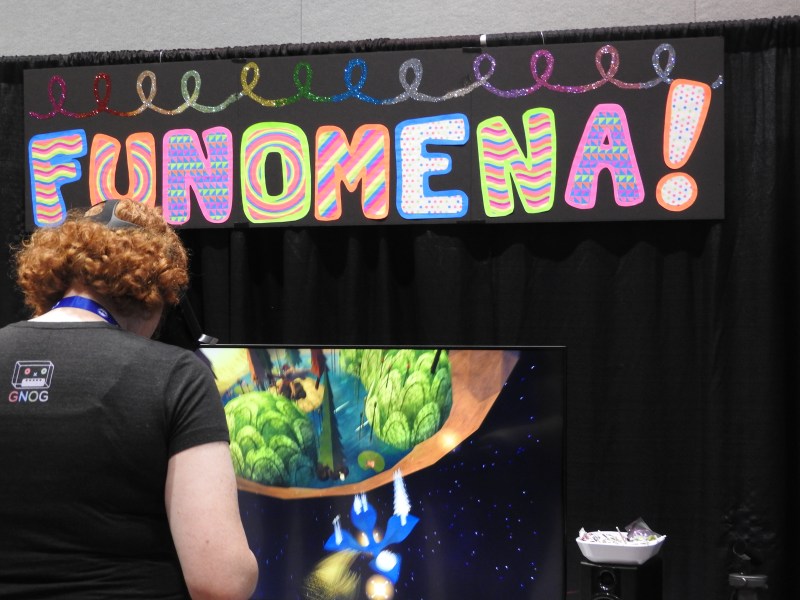 Above: Indie game firm Funomena had a booth at GaymerX.

GamesBeat: Do you learn anything from other fan communities elsewhere, other events like this?

A lot of these things make events and games better, and they’re easy. Gender-neutral bathrooms, being sensitive about gendered pronouns, this costs nothing. For people who use them and care about them, it shows that we’re thinking about them, and we want them here. The same way if you talk to people from Able Gamers, it’s like — you can put a color-blind option into a game, and it takes five seconds. And the people who need it say, “Thank God, I can actually play this game.”