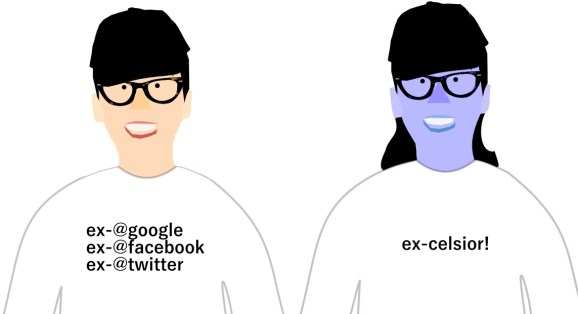 There’s a Silicon Valley trend that’s been bothering me lately. Open Twitter and you’ll see hundreds of tech bios that read a variation of:

As a marketer, I understand the appeal. Association is a powerful tool that adds credibility and authority. But there are problems and dangers with this sort of self-identification.

For one, it can be taken the wrong way.

A while back, the Harvard Crimson ran an article about the difficulties Harvard alumni face with revealing their background (known as “dropping the “H-Bomb”). If they bring up their alma mater, they risk obfuscating the rest of their personality with all the associations Harvard calls to mind. But if they deliberately hide their school and are caught, then they seem condescending. So alumni tip-toe somewhere in between; mentioning their background when appropriate but not making it a first impression.

This seems like a good approach for elite tech bios as well. And it can work to the person’s advantage, because playing down tactfully projects confidence and humility, while playing up can sometimes project insecurity.

Aside from matters of social etiquette, though, there are two far more important reasons why we should discontinue the practice of advertising pedigree.

The first relates to decision making. If someone’s worked at great companies, then they’re probably vulnerable to overconfidence bias. Focusing too much on past associations and victories can prompt the automatic thought bubble: “Of course I’m right. I was right before, and I’m an ex-so-and-so.” This can lead to dismissing opposing viewpoints or becoming complacent.

Game of Thrones fans can see a parallel with Daenerys Stormborn, who often describes herself: “of the House Targaryen, First of Her Name, the Unburnt, Queen of the Andals and the First Men, Khaleesi of the Great Grass Sea, Breaker of Chains, and Mother of Dragons.” While she deserved every one of these titles, her habit of dwelling on them blindsided her to many dangers.

The second reason we should discontinue the practice is cultural.

The tech industry has a diversity problem, and talking too much about exes only adds bricks to the wall. Identifying ourselves with our exes biases us toward other exes, whom we talk to more, mentor more, and ultimately hire. And if we become influential, then the people who look up to us might see our sterling path and think that success will never be in their reach — they went to the wrong school or had the wrong first job. That’s a shame, because innovative thinking always comes from divergence.

The “exes” phenomenon permeates other sectors of the tech ecosystem. Every week I read a news story or a Kickstarter pitch about a company or product that’s been founded by ex-Apple or ex-Microsoft employees. I think I saw a hoodie somewhere from an ex-Google.

For the writer covering the story or the entrepreneur crafting the sales copy, it adds a familiar tie-in to the startup, but it also rings hollow. Surely, there are deeper, more interesting product or founder angles to unearth, especially in this age when the big tech companies employ millions?

And we all know of companies that only hire certain exes and alumni.

The irony about this whole thing is that exes are always exes for a reason. People leave companies because those companies stopped satisfying their needs. Seen in this light, a list of exes becomes less like a victory lap and more like a blues song reminiscing about relationships that didn’t work out.

Let’s hide the pedigree, forget the exes, and give the world a deeper picture of this person’s life, so they don’t appear a mile deep and an inch wide.