Users can get information about specific tournaments through the site. This is another example of the world trying to take advantage of a growing competitive gaming market, which intelligence firm Newzoo projects will drive $1.1 billion in revenues by 2019. Bing also predicts esports winners, which it also does for traditional sports and reality television. This new feature can also drive esports fans who usually use Google, which doesn’t have a similar feature, to Microsoft’s Bing.

The 2016 League of Legends World Championships, which are going on now until October 29, will be the first event that Bing will cover. Users can find information on standings, stats, and schedules by searching for “league of legends 2016” or “lol worlds 2016.” Bing users can also search for “csgo events” to find information on Counter-Strike: Global Offensive tournaments. You can see an example of what the information looks like in Bing below, with the predictions highlighted in blue. 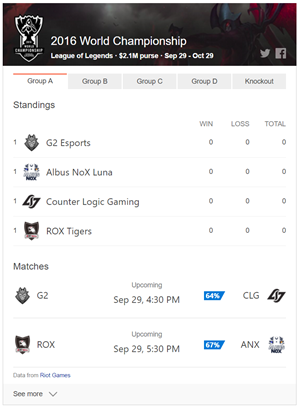 Above: Esports stats can now show up on Bing.

Counter-Strike: GO and League of Legends are two of the most popular esports out there, so it makes sense to see Bing work with them first.