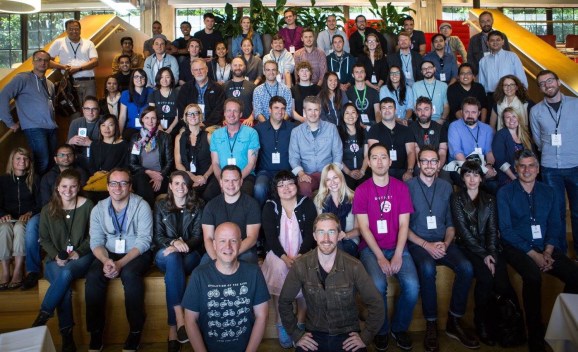 Startups, investors, and leaders from the biggest chat platforms on the planet gather for a photo at the Botness conference held June 13-14 at PCH/Highway 1 in San Francisco.

The shift in the startup world from apps to A.I. is, in essence, moving from making tools to making people. An app enabled a user to perform a function; at its heart it is DIY. Therefore, apps can be judged by their utility. Does the app help the user solve their problem? If so, then it is a good app.

A.I.-supported chatbots endeavor to replicate human interaction, a much more nuanced task. It is not enough that they simply perform — they must be likeable. We all have had a coworker who was good at his job, but whom you still couldn’t stand for intangible reasons.

In the past, the most valuable skill set for startups was technical savvy. Getting into the top accelerators without a programmer on the team was like trying to get into a famous nightclub with no girls in your group. Back of the line, bud!

That being said, some of the most prized technical minds in Silicon Valley are so steeped in coding that they might not pass a Turing test. In the future, to make convincingly human-like programs, teams will need a strong background in humanity, or what it means to be human. Perhaps backgrounds like philosophy, art studies, and creative writing may see their value on the rise. Education that has emphasized looking objectively at what it means to be human is important when trying to recreate human qualities in a machine.

Everyone agrees that the rise of A.I. and chatbot interfaces will forever change the landscape of apps. However, much less attention has been paid to the effects of those changes on the startup teams that create that technology. Conventional wisdom around startup teams claims three key members to make the perfect team: the hustler, who could sell stale Halloween candy to a granola eater; the hacker, who writes lines of code in his sleep; and the designer, who knows the exact shade of blue to make even the most cynical of art critics gasp.

Unlike hustlers of the past, who were always gifted talkers, designing for people will require these hustlers to be skilled listeners as well. The natural way our personality evolves is by gauging the micro-responses of everyday interactions and adjusting accordingly. A joke that was a gem in your head, but which made for an awkward pause at the family dinner table, clearly won’t be repeated in the future. Machines lack social feedback loops and thus require a hustler to gauge users’ responses to it and to adjust the personality accordingly.

For the time being, the hustler component appears pretty future-proofed, unless some cunning team can find a way to automate evangelizing a product — something I would love to see someone try!

But what will happen to the hacker and designer? A.I. increasingly writes its own lines of code, and, although a certain amount of programming savvy is still necessary to get the A.I. up and running, it might not warrant a full-time team member. Moreover, the need for graphic designers is virtually nonexistent when the interface is conversational. Sure, there is a logo in the small chat window, but yet again, does this small initial work necessitate a full-time team member?

Who then will replace these roles in future startups?

With A.I., the need will be less about writing the exact commands and more about training an A.I. what commands it should write. The need then will be for a data scientist who can look at reams of data and understand what needs to be tweaked to get closer to the desired outcome.

Rather than a deep knowledge of JavaScript, these team members will need a keen understanding of all the latest A.I. tools, how to best pick strong features for optimal outputs, and how to best visualize their data sets to share with the other team members. These analysts also have the difficult job of quantifying the immeasurable. How do we chart the likability of a personality? After all, the best A.I. assistant should feel like a helpful friend; how do we define this important feature? A friendship coefficient? These are just some of the many challenges that will require the brain of a math genius and the heart of an artist.

What about designers? As applications become more conversational, startups will move from designing with pixels to designing with words. Therefore, the demand will shift from skilled graphic designers to skilled writers. The perception of your brand will be influenced more by how impactful your words are than by your graphics and fonts.

Instead of having a firm grasp on Photoshop, these team members will need to understand all the aspects of good writing. How do you hook your audience? How do you communicate clearly? How do you logically structure the conversation?

Furthermore, these writers will be held to a much higher standard than an app copywriter. We all enjoy a quick snicker from a tepid joke in an app dialogue because apps are essentially tools — we don’t expect tools to be funny (monkey wrenches notwithstanding). Virtually any comic relief benefits from low expectations in that setting. However, that very same quip about spam filters that got a couple giggles during your app onboarding process would have got you unfriended if you had made it yourself on Facebook. Writers will now be held to the much stricter standard of creating likable people, not just tools.

Does all this mean it is time to update startup teams? If so, we need to confront perhaps the most important aspect of any tech industry change: pithy lingo. I humbly suggest this new holy trinity: the Evangelist, the Analyst, and the Author.

Think you got a better trinity terminology? Let me know at aiden@castingai.com.