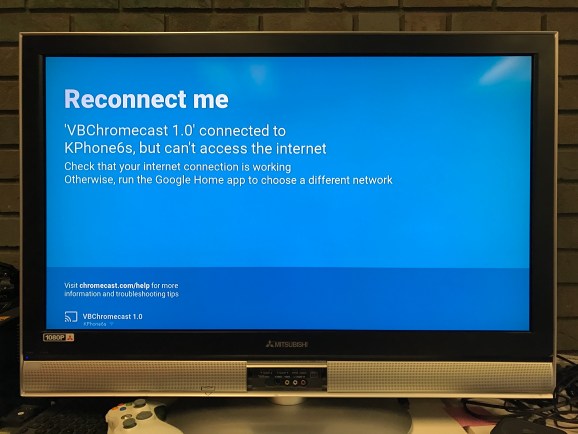 Notice the reference to the Google Home app on a Chromecast-connected TV.

If you have an Amazon Echo, you manage it through a native mobile app for Alexa, Amazon’s voice assistant. Google will be doing something similar to help people manage the $129 Google Home smart speaker through which people will be able to ask Google questions. Google already has a mobile app for its OnHub line of routers, so the approach isn’t new for the company.

In fact, Google has had a Chromecast mobile app for a few years. Earlier this year, Google rebranded the app to go by the simpler name Cast. Now the app is changing again — and it will soon be called Google Home. The app itself has begun to inform users of the upcoming change. 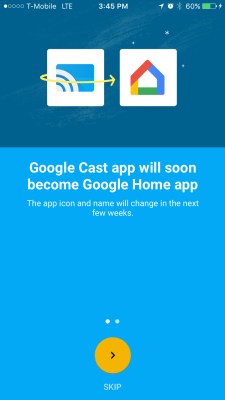 Above: Google officially announces the change in the Cast app on iOS.

The change isn’t a surprise. Here’s why.

Last week, someone on Reddit documented a reference to a “Google Home app” in a preview firmware release for the Chromecast. The reference points to yet another thing Google is announcing today in conjunction with its hardware event in San Francisco.

VentureBeat was able to replicate the mention of Google Home, as well find a second reference to it when Chromecast was connected to Wi-Fi but couldn’t reach the internet.

The context of the references is just as meaningful as the reference itself, which proved that the app would be coming.

The second one is slightly different:

“Check that your internet connection is working,” the error message says. “Otherwise, run the Google Home app to choose a different network.”

The Chromecast app and the rebranded Google Cast app have both used similar messages in case of connectivity issues; the only difference is that they have used “Chromecast” or “Google Cast” in the places where “Google Home” is mentioned now.

On top of all this, the preview firmware no longer shows the original Chromecast logo — which resembles the hubcap-like Google Chrome logo. It now prominently shows Google’s “G” logo, as my colleague Evan Blass pointed out last week. The “G” logo will also be featured on the forthcoming Pixel smartphones and the 4K-compatible Chromecast Ultra.