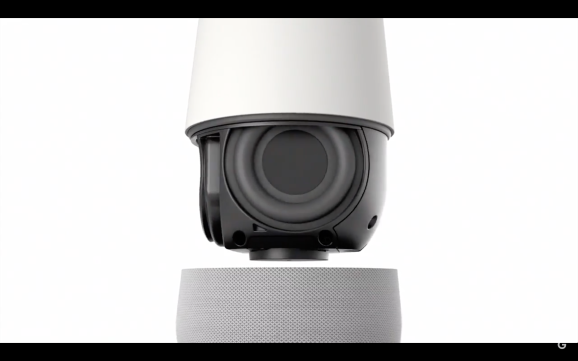 Inside the Google Home.

At a press event in San Francisco today, Google provided more detail about the Google Home, its smart speaker that lets you talk with Google. The company first introduced the hardware at the Google I/O developer conference in May but did not talk about how much it would cost or when exactly it would become available to consumers.

It will be available for $129. Preorders begin today. It will become available in the Google Store, Walmart, Best Buy, and Target stores starting on November 4. There will be several bases available for consumers to choose from.

The top of the device has a touch-capacitive panel to start interacting with Google — as an alternative to triggering it with the hotword “OK, Google” — and it produces rich bass and natural highs, said Mario Queiroz, head of the product management group in Google’s hardware division. The device supports many music streaming services, including Google Play Music, Pandora, Spotify, and Tunein, and it remembers users’ preferences so they don’t have to keep specifying it in every voice command. The app also recognizes which song a user is talking about. Plus, users will be able to Cast audio to Google Home and also control Chromecast devices from the Google Home.

If you have multiple Google Home devices, only the devices that understand what you say will respond to your voice commands. And the system will be able to play the same song on every Home device.

Google has implemented speech recognition in Google Search, the Google Keyboard for Android, Google Docs, and most recently Google Maps. The Google Assistant within Google Home is more optimized for back-and-forth interaction, and it’s better suited for handling queries from everyone who might walk up to the speaker in the surrounding area.

It’s also able to deal with linked commands, like asking how long it takes to get to a place by car and then saying, “How long will it take to bike there?” Google knows what “there” refers to. And it has some semblance of cross-device understanding — after you create a shopping list on Google Home, you can ask the Google Assistant to bring it up on a Google Pixel phone, and it will appear in Google Keep.

Google can also provide a daily briefing summarizing what’s coming up on your calendar.

The Google Home additionally lets you control internet-connected devices from Nest, SmartThings, and Philips (the Hue lights), and there will be IFTTT integrations as well. There will be support for YouTube and Google Photos control on a Chromecast-connected TV, too.

Given Google’s experience and improvements in the domain of speech recognition, one would think this type of voice-first dedicated hardware would have come out earlier. But it took a precedent to trigger the Home’s development, in a sense. At Google I/O, Google chief executive Sundar Pichai credited Amazon for “creating a lot of excitement in this space.” The initial device was the Amazon Echo, which packaged up Amazon’s Alexa voice assistant. Since then Alexa has gotten embedded in other companies’ devices, and Amazon has come out with smaller, less expensive versions of the Echo.

Perhaps Google will follow Amazon’s lead when it comes to expanding the availability of the audio-only version of the Google Assistant; in any case, it has already followed Amazon in creating a new type of hardware. Or, more accurately, a new spin on an old type of hardware.

Last month Android Police reported that the device would cost $129, and that proved to be true.