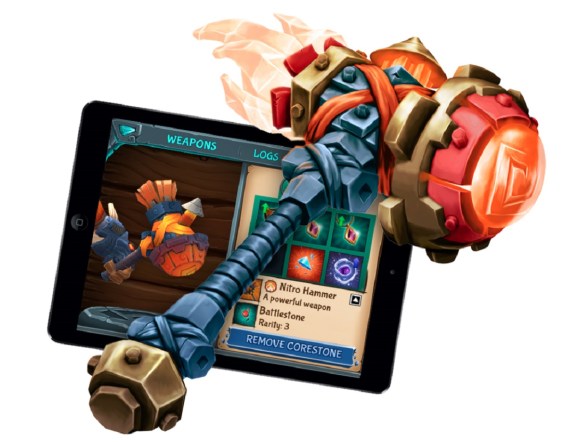 Lightseekers is a new toys-to-life game from PlayFusion.

Former designer who worked on the popular Runescape game have created a new startup PlayFusion and a new game Lightseekers that it hopes will represent the next generation of toys-to-life video games.

In a challenge to Activision’s $3 billion Skylanders business, Lightseekers is a connected-play video game with smart action figures, augmented reality, artificial intelligence, and interactive trading cards. The company has teamed up with toy maker Tomy to make the toys, which you can wield as if they were controllers for characters inside the mobile game. It needs a partner like that in a market where Disney couldn’t survive and other big competitors loom, such as Warner Bros.’ Lego Dimensions.

It comes from Cambridge, England-based PlayFusion, which was started by CEO Mark Gerhard and former members of Runescape maker Jagex in January 2015. The company is launching a Kickstarter campaign today to generate excitement about Lightseekers, but Gerhard said in an interview with GamesBeat that the company previously raised money from its own team members to date. PlayFusion hopes to raise $200,000 in funding via crowdfunding.

Lightseekers is a lot more than a game. It’s a full fantasy ecosystem powered by PlayFusion’s proprietary technology platform, which includes proprietary dual-core ARM chips. It is an action and fantasy adventure role-playing game built for mobile and tablets. It will also debut in 2017 on the Mac and PC. PlayFusion plans to continuously update the storyline with new adventures, lands, and characters. In that way, the game functions more like a service. 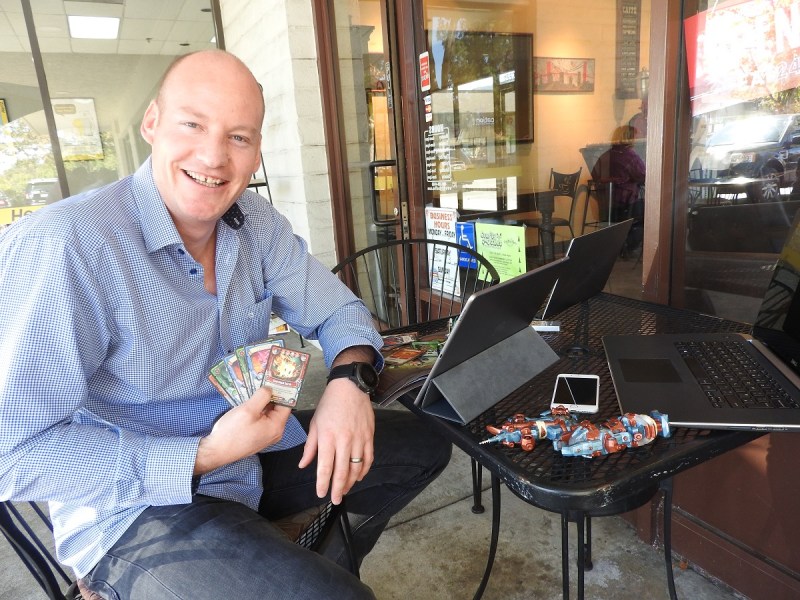 Above: Mark Gerhard, CEO of PlayFusion, makers of Lightseekers.

“We are game makers first and foremost,” Gerhard said. “We wanted to build the future of toys to life, and that quickly led to a platform, rather than just a new intellectual property. The only way to do something so out of left field was to fund it ourselves.

“We didn’t think for a moment we would compete with Skylanders. If you look at the high-end with toys like Anki and Sphero, we want something in the middle with far more value. We have an innovative approach, with a connected Internet of Things system. We want this to be the graduation system from toys to life, with a target for 9 and older.” 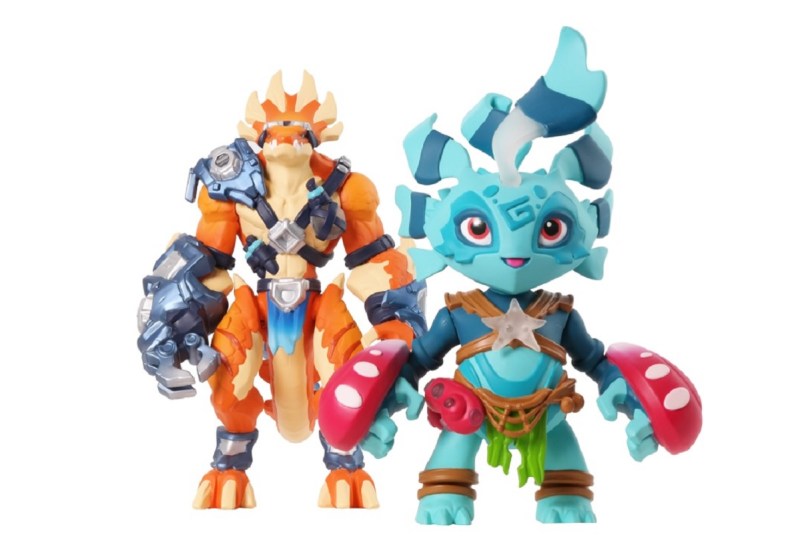 Above: Lightseekers has smart toys with embedded electronics.

This capability comes via the hi-tech FusionCore, the powerful mini-computer embedded within and the “brains” behind PlayFusion’s smart connected toys. The FusionCore completely eliminates the need for cumbersome near-field communications (NFC), allowing the game to seamlessly connect to 7-inch action figures. Using Bluetooth as its network, the system doesn’t need a portal for connection, as Skylanders, Infinity, and Dimensions requires.

Players flip the “on” switch and instantly transport their hero into the game, enabling real-time, two-way interactions between Lightseekers and the figures as well as between figures. The toys talk, vibrate, and use different colored lights to show levels, status, warn of impending danger and help guide or even control gameplay. In a demo, I used a toy to control a flying character in the game. I could move my hand around to make the in-game character navigate obstacles in the game. 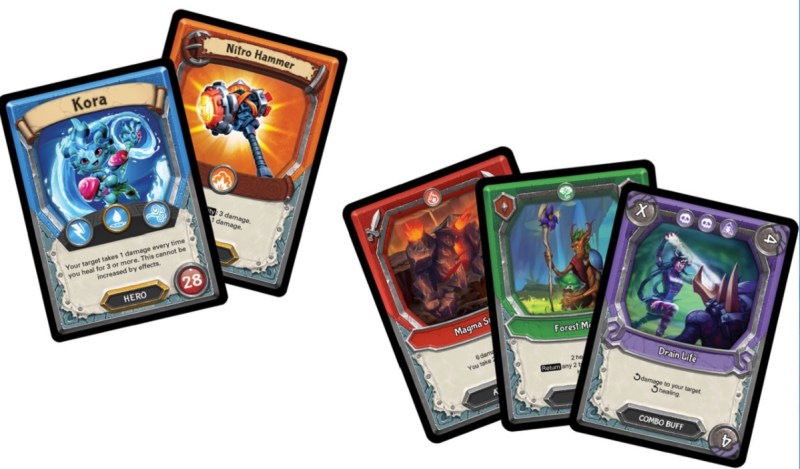 Above: Lightseekers has interactive trading cards.

Each figure has its own tag and develops an identity and personality through its digital experience, thanks to an embedded electronic chip. Its attributes, accomplishments, social circle and lineage are stored permanently. In other words, Lightseekers remembers the last character played, enabling on-the-go play without figures in the state that it was when it was last connected. Any progress made is then updated when the FusionCore is reconnected.

Lightseekers also has interchangeable accessories. Equipping a weapon or accessory on an action figure will have an immediate effect in the game and vice versa, opening up new abilities and adventures. As with figures, weapon and accessory stats are stored within, so players can share them, helping friends unlock special content or letting them “level them up” and return them with more experience and power than before. In addition, flight packs can be added to any hero, allowing players to magically control their in-game character by moving the toy.

For those who prefer trading cards, it has an interactive collectible trading card game with 385-plus cards at launch. It all works independent of the other, but when played together, the experience will be even more fun. Each card, when Lightseekers scans it, delivers immersive augmented reality experiences, rewards game players, and unlocks powerful in-game abilities. In addition to cards, it can reward players for interacting with almost anything—songs on the radio, shows on TV, movies, and posters on the wall. 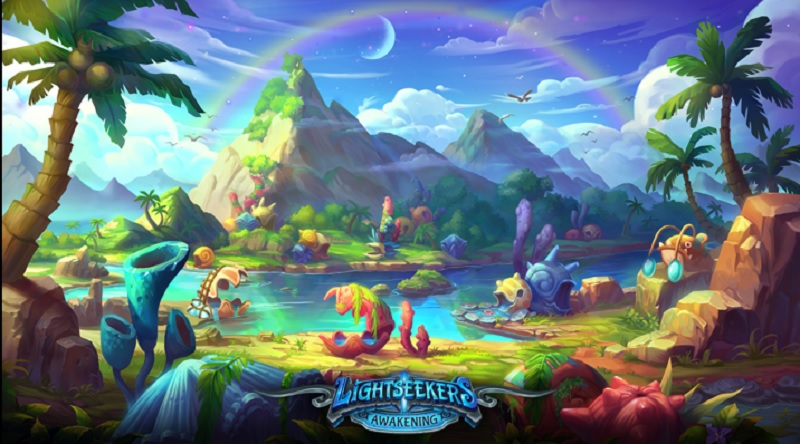 Above: The world of Lightseekers.

It can do this because it has a logo system that functions a lot like QR codes. It allows for faster recognition. And when you hold a card in front of the camera, you can see an action figure come to life via animation. You can swipe the character across the camera and it appears in the game.The codes can even be embedded in a comic book, so you can see an augmented reality animation while reading a comic book.

The company will have its digital beta test in December. The full game and toys are expected to launch in the spring. PlayFusion has 46 employees. Gerhard said the company will also begin working on another intellectual property later, and it is open to licensing out its technology platform to other game makers.

“We want to give game makers a tool box like this,” he said.

The founders had some money to invest after selling Jagex to investors in 2010. They teamed up with other developers from Core Design, which worked on the original Tomb Raider games. Rivals include Skylanders, Lego Dimensions from Warner Bros., and Jumo. PlayFusion has filed for 16 patents.

“Now that we have done this, I think we’ll see new investment come into this space,” Gerhard said. “We started with toys-to-life 2.0, and it has become a  brand-to-life, or the future of mixed media and connected play.”

Correction, 4:40 p.m. Pacific: The team behind Lightseekers worked on Runescape but did not create it. We’ve corrected the error.