Paper Mario Color Splash feels more like walking through a board game or a diorama than like playing a video game on Nintendo’s Wii U console. The fifth game in this side-series, Color Splash also feels no less authentic a Super Mario Bros. experience for how radically it messes with the traditional formula.

So far that’s a plot that could have been lifted from any of the main Super Mario Bros. games. In Color Splash, however, Mario, Toad, the Princess, the Slurp Guys, and all the other characters are two-dimensional paper cutouts. The levels look as if they were built from corrugated cardboard, construction paper, felt, and tape. And where regular Mario uses mushrooms, fire flowers, and Tanooki suits to save the day, Paper Mario only has a Paint Hammer and a deck of cards.

That’s because Paper Mario Color Splash isn’t a platformer. It’s an RPG, and an action game, and a turn-based card battler, and most of all, a comedy.

Above: An electric fan is a weapon of mass destruction in a land of paper cutout characters.

You can never have too much charm

True to the role-playing roots of the Paper Mario series, Color Splash has a lot of dialogue, usually carried out in exchanges between Mario and one of the dozens of Toad characters he meets throughout the game. The writing is playful. It’s loaded with puns and inside jokes for Mario fans.

The courses in Color Splash are adorable. They look like they were built during an elementary school arts-and-crafts fair. Mario uncovers pieces of tape that he has to unstick to unfurl new portions of levels, and tabs that he needs to pull in order to unravel bridges to cross. Touches like these complete the illusion of playing in a papercraft world.

Mario will also run across “real” objects while exploring Color Splash, like an electric fan that’s turned on and blowing parts of a course around. It refers to these as “Things.” Mario can squeeze the color out of Things and turn them into playing cards. Some Thing cards help Mario solve puzzles inside course levels. When used during a battle, Thing cards can trigger hilarious animations. 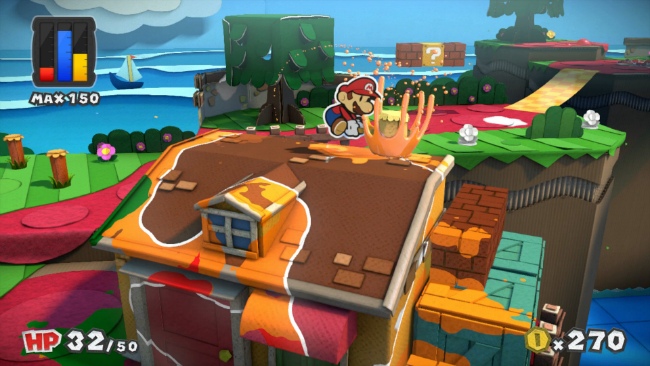 Above: Mario doesn’t bother with dropcloths when he paints houses.

Hammers are for making and breaking

Whenever Mario encounters a colorless spot, he can slam down his hammer and paint the spot in. The percentage of colorless spots restored is a primary metric for course completion in Color Splash.

Mario’s Paint Hammer holds red, blue, and yellow tubes of paint. The paints will mix together automatically in order to match whatever color Mario is attempting to fill in. If Mario needs to refill his hammer with a specific color of paint, he can pound objects in the world that match the color he’s trying to collect, like smashing red flowers to pick up blobs of red paint.

Filling in colorless spots usually unlocks gold coins for Mario to collect. Gold coins can be spent at a card shop in Port Prisma to purchase cards for Color Splash’s card battling game. Filling in colorless spots can also unlock puzzles. If Mario finds a water wheel that isn’t turning, it’s could be because of a colorless spot that Mario needs to fill in with blue paint, after which the water starts to flow again and the wheel starts to turn, which may uncover a previously hidden path through the course.

Mario also runs into plenty of Toads that have lost their color. When Mario smashes them with his Paint Hammer, the Toads regain their color, come back to life, and often, they have either a snappy quip or some useful information to share. Above: Mario has three hammers with this Koopa Troopa’s name on them.

Card battles with a twitch

If Mario crosses paths with a bad guy, Color Smash cuts to a card-battling, turn-based minigame. Each card in Mario’s hand has a picture that identifies the type, strength, and number of attacks represented by the card. A boot represents a Jump card, meaning Mario will hop on his opponent’s head when you play it. Three boots means that Mario can make three jumps using that single card.

Cards come in painted and unpainted versions. The painted versions are more effective. Mario can choose cards from his hand that are colorless, and then color them in via paint from his Paint Hammer. Mario can also increase the base effectiveness of his cards by successfully executing active commands after the card is played.

Let’s say Mario plays a Jump card. If the player hits the A button just before Mario jumps on a bad guy’s head the player can earn another bounce, up to five in a row, in essence doing up to five times as much damage if the player successfully executes the active command. If Mario plays a Hammer card, he holds the hammer over his shoulder and lets the attack charge before throwing it. If the player hits the A button just as the hammer’s charge is greatest, the attack will do more damage than otherwise.

The active command system works on defense, as well. If the player hits A at just the right time before a bad guy throws an attack, Mario will block some of the damage from that attack. He can play Mushroom cards during a battle, find heart icons inside courses, or visit Princess Peach back in Port Prisma to regain hit points.

Enemies lose color as they take damage, and die when completely drained. If Mario wins the battle, he collects gold coins and blobs of paint, sometimes picks up new battle cards, and usually finds some Hammer Scraps that increase the amount of paint that the Paint Hammer can hold. 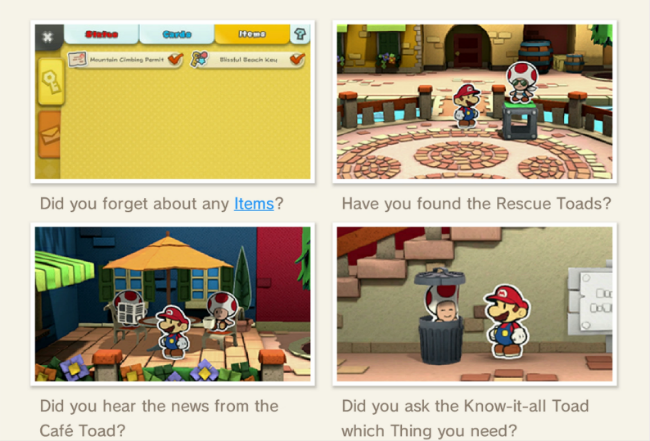 Above: … and all the other things on your checklist when you can’t figure out where to go next.

I was only three courses into Paper Mario: Color Splash when I felt stuck for the first time, because getting to the next course isn’t only a matter of beating the preceding course. Sometimes I had to backtrack and find a character hidden within one of the courses, who would then unlock my path forward. A Toad in Port Prisma sits outside a cafe and reads newspapers, and sometimes he had a clue as to where I was meant to go next. In almost every case, the solution to feeling stuck was to slow down and more carefully investigate one of the courses, which might not have felt so tedious had it not happened so often.

Setting the cards up on the GamePad was fun the first few dozen times when I was still figuring out how the battling system worked and experimenting with different cards. Once I’d settled on the attacks I preferred to use, and especially when I’d earned enough gold coins to purchase in large numbers the specific cards I preferred, the card selection routine on the GamePad felt like it was artificially inflating the length of each battle.

The thing about smashing a hammer into the ground and flinging paint into the air is that it isn’t an effective way to paint accurately. None of the colorless spots I found in Color Splash required precision painting to fill in, and I was never worried around running out of paint for all the times I had to ham-fistedly smash huge puddles of the stuff around in an attempt to cover one more edge in a colorless spot. A little more abstraction in deciding whether or not the huge gout of paint I’d splurted into the world was in just the right place to fill in a colorless spot would still have been appreciated.

Paper Mario Color Splash isn’t frustration-free, but compared to the Mario platforming games Color Splash is light and refreshing, an opportunity to have an adventure with Mario and his friends that doesn’t require lightning-quick reflexes and high frustration tolerance. You’d better be ready for some cringe worthy puns, however.

Paper Mario Color Splash will be released for the Wii U on October 7. Nintendo provided GamesBeat with a physical copy of the game for the purpose of this review.