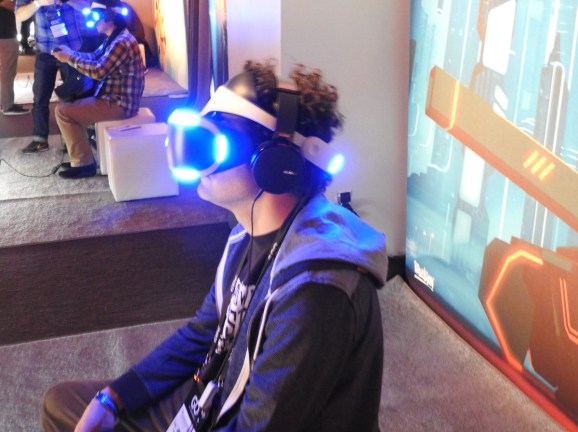 PlayStation VR demo at the GDC.

Sony is making VR for the masses. To do that, the company has potentially skimped on important technology that could cause problems for a lot of people.

The PlayStation VR, which comes to the PS4 on October 13 for $500, has difficulty tracking some of its components when they are 10 feet away or more. PSVR is Sony’s virtual reality system that uses a head-mounted display, the PlayStation Camera, and PlayStation Move controllers to make players feel like they are surrounded by digital video game worlds. But when the headset or controller gets far enough way, all of that starts to break down. This is a major issue because it turns out that most people sit about 10 feet away from their televisions. For me, this means I have to put a chair between my TV and couch in order to take a load off while playing around in Sony’s metaverse.

I hate doing this.

The issue here is that Sony is still using the camera-and-Move-controller tech that it first built for motion controls on the PlayStation 3. This system works well a lot of the time, but it also has its limitations.

Sony previously confirmed that the PSVR “play area” comes up just short of a full 10 feet. In official documentation, the company says that the camera can track you up to 9.8 feet away. 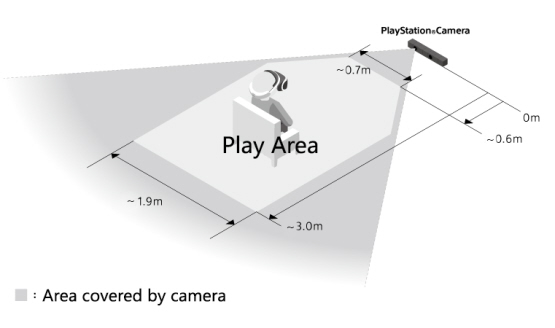 Above: I’ll play wherever the hell I want! This is America!

If you start moving out of that safe zone, PSVR will give you a warning that you are not in the play area.

I can kinda get around that while sitting on my couch as long as I lean forward instead of relaxing into the back of the sofa — but that’s not exactly comfortable. But even if I didn’t mind that position, I’d still have to deal with the DualShock 4. At around 10 feet, the camera has a tiny window where it can actually see the gamepad. if I try to hold it in a natural position while on the couch, games will lose track and flip out.

Rearranging furniture is something users of first-gen VR hardware know a lot about. HTC and Valve ask folks to do it for the Vive. But that is for room-scale VR where I can walk around a relatively large space. Sony’s old camera wants me to move crap around in my living room so that I can sit in a spot that it finds more convenient. That’s not the same thing.

Sony’s VR hardware is definitely a product for the mass market, but a lot of those people might come away from the product frustrated that they can’t just sit in their normal chair while playing PSVR games.