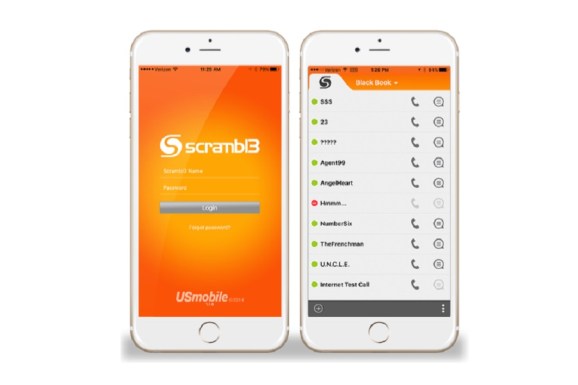 Scrambl3 encrypts your mobile calls with a VPN.

USmobile is launching a new version of its Scrambl3 app that lets you make private and secure encrypted mobile calls.

The app is taking a swing at popular mobile messaging networks WhatsApp and Viber. “Unlike all the other VOIP communication platforms these days, we can achieve the kind of security you need if you’re a target,” said Jon Hanour, CEO of USmobile, in an interview with VentureBeat.

Irvine, Calif.-based USmobile worked with the U.S. government some years ago on a more secure classified communications system for government use. The company creates a “dark tunnel” between the device and the server, getting around the well-known public telephone system SS7 security flaw that allows hackers to listen to calls on other networks.

“That same type of architecture that protects data like voice, text, and email needs to be extended to VOIP as well,” Hanour said. “Not only is the security part extremely important, but what is more important is the privacy aspect. You don’t need to turn over any information to us. You can communicate anonymously, and that’s very important to a lot of people.”

Facebook bought WhatsApp for $23 billion, while Viber was acquired by Rakuten, and both of those messaging platforms now have voice communications. In contrast to an app revealed in February, the version of Scrambl3 has no sign-up process. You just download the app, create your anonymous username, and start making free calls and sending messages to your Scrambl3 friends and business associates. You can contact people anywhere in the world that you can get Wi-Fi or mobile connections.

Above: How Scrambl3’s encryption works.

Scrambl3 is private, non-intrusive, and does not use your cellphone number, nor does it access your personal phone contacts (WhatsApp and Viber do), Hanour said. You can even use your iPad or Android tablet to make private calls and send messages. You can’t do that with WhatsApp or Viber, because they rely on your cellphone number for making and receiving calls and texts.

And you can use your Scrambl3 username on as many mobile devices as you wish, you just need your anonymous Scrambl3 username. For complete transparency, Scrambl3 employs only open-source software components to create the top secret-grade VPN, encryption algorithms, and internet protocols.

Scrambl3 users privately exchange their usernames and add them to their respective Scrambl3 Black Book contact listing. No unwanted calls or messages are possible on your private network. You don’t have to provide Scrambl3 with a list of your contacts or your phone number or credit card. You simply exchange a Scrambl3 name with someone else who has a Scrambl3 name.

“You have control over who can call you,” Hanour said.

A recent “60 Minutes” segment on “CBS News” with U.S. Congressman Ted Lieu exposed how hackers can easily listen to mobile calls because of the inherently flawed Switching System 7 (SS7) that is an integral part of the global public telephone system.

“By placing the encrypted communication inside a top secret-grade VPN, an exponential increase in security is achieved, so hackers are effectively shut out,” USmobile chief technology officer Brad Arant said, in a statement.

Enterprise can set up an unlimited number of free Scrambl3 accounts, as long as they provide an email for updating purposes.

In an independent assessment of Scrambl3, one of the world’s foremost cryptologists, Professor Dr. Yuliang Zheng, at the University of Alabama, said in a statement, “USmobile’s Scrambl3 has implemented the most salient security features of NSA’s ‘Fishbowl’ (secure phone) initiative [designed to protect U.S. Government top secret classified communication] for secure Voice over Internet Protocol (VoIP) architecture, and has a number of unique characteristics that put it in a class ahead of existing commercial secure VoIP techniques.”

The app, which is aimed at both consumers and enterprises, took more than 2.5 years to develop. USmobile had to build a backend infrastructure with the help of IBM to create the enterprise-grade technology needed to deliver encrypted data and voice calls over the network without any annoying delays, Hanour said.

Although USmobile worked with the National Security Agency to build secure architecture from 2011 to 2013, Hanour said that the system does not have a backdoor, nor is there any secret way to circumvent the app’s security.

“For now, we are focused on getting traction with as many users as we can,” Hanour said.

USmobile was formed in 2013 as a spinoff from Cyvergence. The company has raised $4 million from individual investors, to date, and it may raise additional money within the next six months or so. It is also examining equity crowdfunding alternatives, Hanour said. The company currently has seven employees.

Above: USmobile says Scrambl3 is more secure than Viber or What’s App calls.