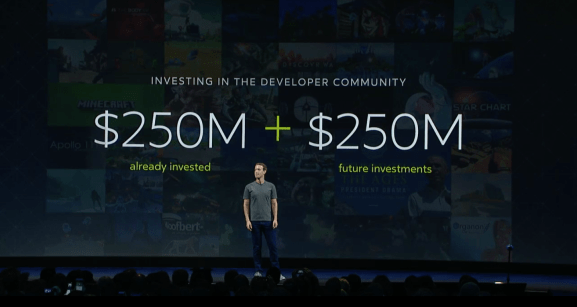 Facebook didn’t close its wallet after spending $2 billion to acquire Oculus VR way back in 2014. The company has continued to put money into virtual reality.

Mark Zuckerberg, founder and chief executive of Facebook, announced today at Oculus Connect in San Jose, California, that the company has invested $250 million into VR and it plans to fund apps and games with another $250 million in the future. That funding includes $50 million for mobile VR content as well as $10 million each for educational programs and apps that promote diversity. The cash will also go to entertainment, enterprise tools, and games. Analysts predict VR could generate as much as $50 billion in revenue by 2020, and Facebook is well positioned to capitalize on that.

“We’re committing another $250 million to fund even more content development to developers in this community,” said Zuckerberg. “We’re really excited to do this.”

The social-networking giant also revealed that they want to go beyond tools and games for consumers and businesses. Zuckerberg revealed that he wants to ensure that education has a chance to flourish in VR. That led to him announcing a $10 million fund specifically for learning applications.

“Education is going to be a powerful example of the potential of VR,” he said. “Already today, 10 percent of the experiences in the Oculus Store are education.”

On top of the funding, Oculus will get a specific spot in its store just for education. This could transform how teaching works going forward, and Facebook will stand at the center of that change.