Horde 3.0 co-op mode is perhaps one of the highlights of Gears of War 4, the blockbuster exclusive coming from Microsoft to the Xbox One and PC on October 11. It turns the gritty, bloody, and over-the-top comical gameplay of Gears into survival of the fittest. Horde mode is intense, and it will leave you screaming at some point when you finally succumb to waves of enemies.

With Horde 3.0, up to five human players team up to defend a space. They can take advantage of the Fabricator, a machine that can build fortifications and weapons such as barriers, sentries, turrets, decoys, and weapons lockers. This mode is so fun that it’s one reason why players stick with the game so long, and it’s another reason why Gears of War has become a $1 billion franchise with 45 million players to date. 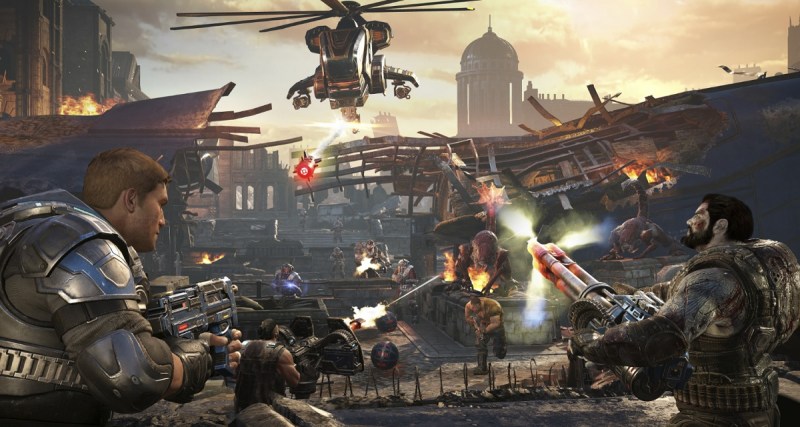 Above: Horde 3.0 mode in Gears of War 4. That helicopter is deadly.

I’ve captured some co-op mode sessions on video below. We had a group of four journalists and a developer playing up to about level 20. After that, we just couldn’t stay alive. That was a reasonably good attempt on our first try. Check out the videos of our gameplay below. I experienced some “emergent gameplay” during the firefights, as described in an interview with Ryan Clevin, lead multiplayer designer at Microsoft’s Gears studio, The Coalition.

“We’ve got an entirely new set of armies the players will face,” Clevin said. “We have embraced the emergent play that we saw happen in Gears of War 2 and the original Horde. We saw players experiment with play and we wanted to blow that out.”

In Gears of War 3, the defenses were prescribed, such as the location of a turret. In the new Gears, that’s up to the players.

“We’ve given players a whole new way to play and defend,” Clevin said. “This came from the moments of surprise in Gears of War 2,” where players could put down “boom shields” that channeled the enemies in a particular direction.

“We wanted to go deeper to enable player choice,” he said.

I can’t imagine making it all the way to level 50, where you face increasingly difficult enemies and a boss fight every 10 waves. You get some bonuses during the waves, but it’s important to find the right weapons in the 30-second intervals in between waves. When I did find a weapon like a Buzzkill, which fires a spinning saw blade at enemies with deadly one-shot-kill effects, I did well. Or getting my hands on a Mulcher heavy machine gun also made a big difference, allowing me to take down multiple enemies. 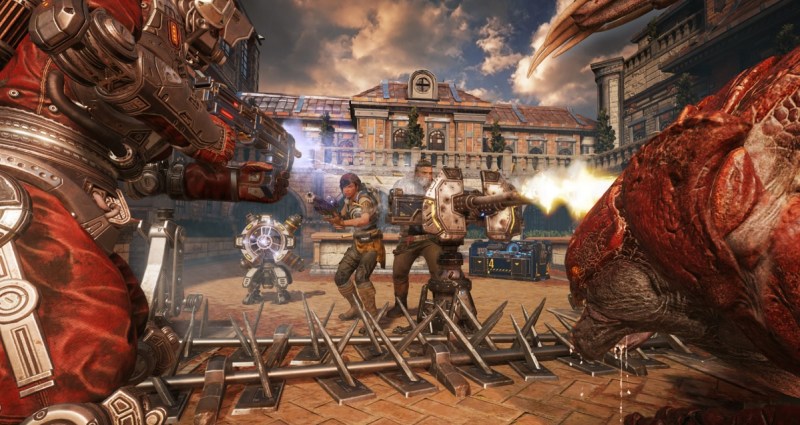 Above: It’s inevitable you’ll be surrounded in Horde 3.0 in Gears of War 4.

But when I couldn’t scavenge anything good, I really paid for it. Forced to rely on a Gnasher (shotgun) or Lancer (assault gun), I had to spend too much time trying to kill each enemy with multiple shots. And that enabled the bad guys to just surround me, or the bigger enemies to come close and cause havoc. My teammates revived me plenty, but at some point, even they got overwhelmed.

You’ll notice that I usually came up with the lowest score in a round. But weaker players can contribute in many ways, like picking up energy, setting up the barricades, or just hanging closer to the better plays and watching their backs. The different weapons and character classes enable different play styles.

The Fabricator is quite useful. If I have a complaint, it’s that we didn’t generate enough points in each round to earn something great, like a turret. We had to settle for barriers, which hold up the enemy but can’t hurt them.

We found that the early enemies, like the mechanical DeeBees, were easy prey at first. The Swarm Drones were a lot harder, as they were bullet sponges. But over time, it got harder and harder. The walking tanks with Overkill explosive shots were tough to take down, as were the flying drones. And among the Swarm, it was very difficult to take down bosses like the Snatchers, which swallow a player and snatch them from the battlefield. 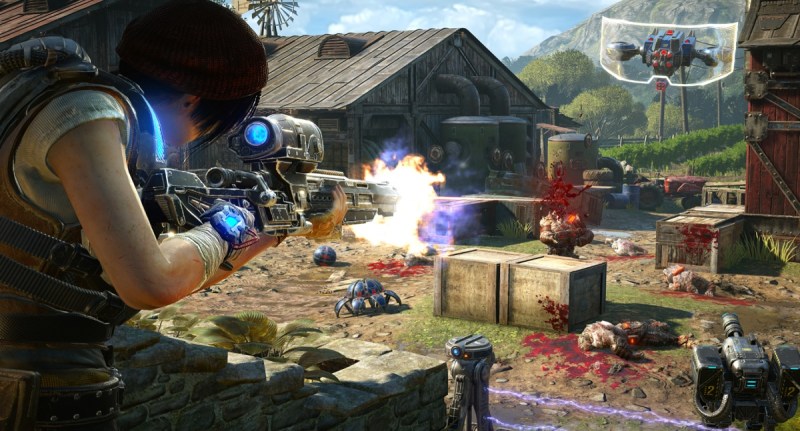 Above: The sniper takes down the big targets in Gears of War 4’s Horde 3.0 co-op mode.

Healing wounded teammates is a must, as it always pays to have four or five team members shooting at the enemy. Resurrecting a dead teammate is possible by returning their COG tags to the Fabricator. You can level up the Fabricator through use to access higher level fortifications.

This mode features five classes: Soldier, Scout, Heavy, Sniper and Engineer. Each can carry any weapon and any character can be any class. Each class has up to five skill slots, and each class has up to 13 different skills. A Soldier can use core weapons, take cover, and do active reloads. The Soldier spawns with frag grenades, while the others don’t.

Scouts can gather energy and collect double Power during combat. Heavies can deal damage, starting with a Boomshot weapon, a Retro Lancer, and a Boltok pistol.

The explosive guns like the Boomshot and the Overkill (which you can pick up from dead DeeBees) are very useful in this kind of battle. You can reload them at the ammo boxes in between rounds, so you don’t have to conserve your explosive ammo. The Sniper starts with a Longshot and a Markza Mk 1 rifle and can do one-shot kills with head shots. The sniper has to take down the big creatures before they get to the rest of the team.

Engineers are good at building fortifications and repairing them. The Engineer starts with a Gnasher, Enforcer, and Repair Tool. You can personalize the characters with Gear Cards, which give you character skins, weapon skins, and emblems. You can earn anything through time spent playing, but you can accelerate rewards through crafting.

Here are the videos of our session where we fought from Wave 1 to Wave 20.