Gears of War 4 marks the return of one of gaming’s big franchises and the start of a new storyline that developer The Coalition and publisher Microsoft hope will lead to a new generation of fans.

The game debuts on Xbox One and Windows 10 on October 11 as Microsoft’s major exclusive title for the fall season. Gears of War: Ultimate Edition owners get it early on October 7. It’s a whole new campaign with new characters who are a generation younger than the heroes of the past wars. I think that the developers at The Coalition did a great job creating a new adventure with new faces and new monsters while remaining true to the Gears of War franchise, which has generated $1 billion and reached 45 million players over the past decade.

Gears of War 4 is a brutal game with gallons of blood spilled, as if red was the favorite color of the artists. You can chainsaw a Swarm Drone in half or completely behead a DeeBee with a head shot. Such violence is a staple of Gears of War games, and you get used to it. But the mature-rated game is not for the faint of heart. You can turn the profanity on or off and bypass some other difficult scenes if you wish.

This Gears of War accomplishes what a full reboot did for Lara Croft and the once-failing Tomb Raider franchise. It is a fresh take with a mysterious story, an urgent rescue mission, and some scary-ass monsters that are very difficult to kill. I thoroughly enjoyed the mixture of serious emotional angst interspersed with moments of laughter.

You can play the single-player campaign with friends in co-op mode. I played it solo, always as JD, and I emptied a lot of clips. Now when you’re going from one firefight to another, it can get tedious. I thought The Coalition had the good sense to realize that the core gameplay wasn’t broken, but players needed a new reason to pick up another Gears of War title.

Editor’s note: This review has some minor story spoilers, but we’ve avoided the big ones.

Its story balances drama and humor 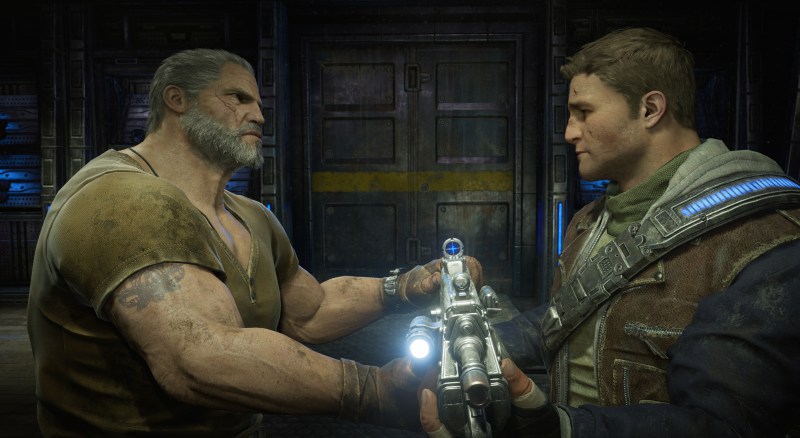 Above: Father and son. The Fenix legacy in Gears of War 4.

Microsoft says the theme of the game is “father’s legacy, a son’s fate.” That’s not a bad description. Every once in a while, between the firefights, Gears of War 4 pauses long enough to give you some emotion and meaning. Its story tells you why you’re fighting.

The main character of Gears of War 4 is JD Fenix (played by Liam McIntyre), the son of Marcus Fenix, the hero of the first three Gears games. The story takes place 25 years after Gears of War 3. After the last battle with the Lambent in Gears of War 3, only hundreds of thousands of people still live on the entire planet of Sera. In a nine-hour single-player campaign, we find out what the younger Fenix is made of, and why he has a hard time getting along with his father, who grudgingly and grumpily comes out of retirement to help to deal with a new threat.

It turns out that wiping out the Lambent and the Locust wasn’t enough in Gears of War 3. The new threat, dubbed the Swarm, has taken the place of the underground monsters from the previous games. On top of that, the human leader Jin has an army of mechanical drones that she uses against JD and his squad over a dispute over the theft of a Fabricator, which can be used to make weapons and defenses. That dispute escalates to the point where Jin sends an army of mechanical nightmares to chase down JD’s squad.

Besides JD, the game has other good characters in Delmont “Del” Walker (played by Eugene Byrd), who provides some comic relief with his wisecracks. Kait is a strong female character, but she’s wounded by the kidnapping of her mother by ugly beasts. She’s full of hatred and urgency as she fights to get her mother back, and when JD’s father is also taken, the two share a bond in hoping to retrieve their elders. And then we have Kait’s uncle, who is the clown of the group.

You have to spend a lot of the time hopelessly chasing after the kidnapped mother of Kait and someone close to JD. This part of the story was tense and serious, and it reminded me of the hopeless state of humanity in the first three Gears of War titles. At the same time, the banter of the squad mates can be amusing, and Kait’s uncle is a hilarious addition to the cast. You’ll want to make sure that you watch the credits all the way through, as you’ll be impressed with the way that The Coalition chooses to end the tale.

A lot of cinematics in the story keep it moving along, and I feel like they do a good job balancing the story and the action. On the other hand, this is not the kind of masterful storytelling you find in games like Naughty Dog’s The Last of Us.

Plenty of weapons to choose from, and new monsters to kill 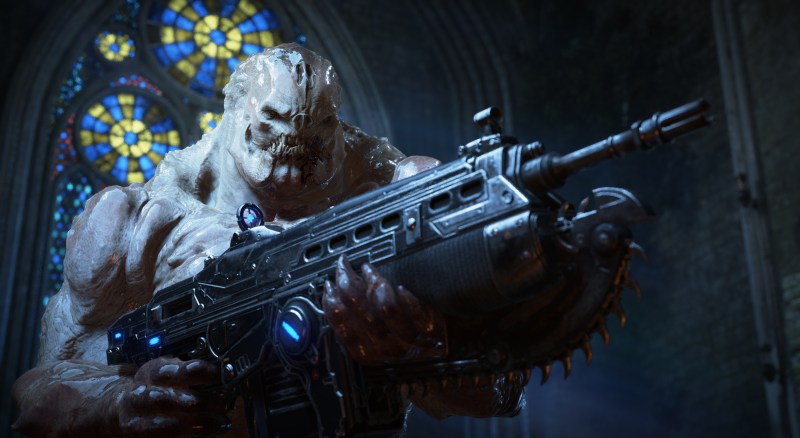 Above: A Swarm drone in Gears of War 4

The basic Lancer with the chainsaw bayonet is still a great assault rifle, but it feels like a pea shooter at times when you’re taking on big monsters. The Gnasher shotgun helps in close quarters, but it still takes multiple hits unless you are really close. But the satisfaction in Gears of War 4 comes from picking up some heavy weapons such as the Mulcher, a gatling gun, or the Buzzkill, which fires circular saw blades that slice an enemy in half. Of all of the weapons that I used in Gears of War 4, the Buzzkill was the most satisfying.

These kinds of weapons are useful against the plus-sized monsters that you run into, as well as the mechanical beasts from the DeeBees. The Juvies are fast little Swarm monsters that can be killed easily but are hard to hit. The Swarm drones are like the Locust, big creatures that take a few blasts or a clip full of Lancer bullets to bring down. But then you’ll face tough enemies like the flying drones and the helicopters of the DeeBees, as well as bigger and bigger Swarm monsters. The Snatchers, which swallow their prey and take them away from the battlefield, are truly menacing. You’ll also encounter some other really big beasts that we’ll leave to your imagination for now. It’s just too bad that the humans on Sera didn’t have nukes. 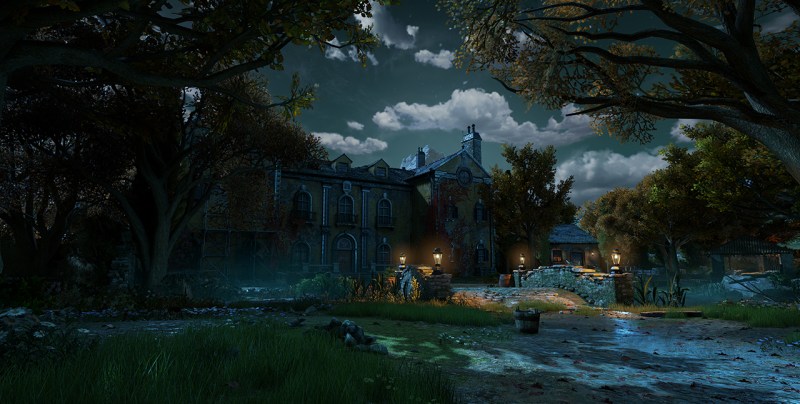 Above: Life on the peaceful farm in Gears of War 4.

Using the Unreal Engine 4 and Direct X12, the developers created one of the most technically ambitious Gears games to date. The special effects include “wind flares,” or violent wind storms that blow sideways into the faces of the Gears. It makes for cool effects, like bodies that fly through the air after you shoot them, or debris that comes crashing into your face as you try to move forward. In multiplayer, the game runs at 60 frames per second, and I didn’t experience slowdowns, glitches, or bugs during my playthrough. From time to time, when tons of things are happening, some of the Juvies become transparent, but this doesn’t result in bad frame rates.

The co-op mode, Horde 3.0, allows up to five players to fight off hordes of monsters and mechanical drones. If you survive a wave, you can use the Fabricator to create defenses that will help you deal with the next wave. You can drop barriers and create auto-turrets that will change the approach that the enemy takes to corner your squad. Your squad mates can revive you, but sometimes they can’t last. As the enemies get tougher and tougher, your weaponry multiplies as well. But it’s a tough thing to survive 50 levels. You’ll spend many hours dying and trying.

The mechs are a blast 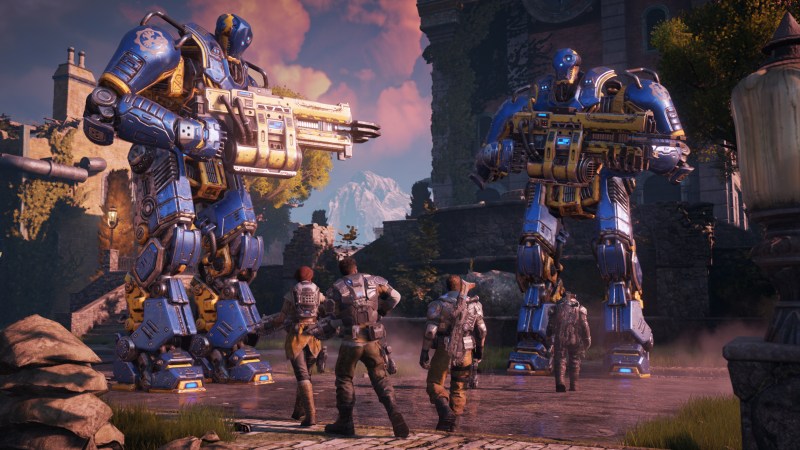 Above: Giant mechs in Gears of War 4.

I enjoyed many of the intense firefights in Gears of War 4, from the defense of the village to the last stand in the demolished city. Some of these were simply single-player expressions of the Horde mode. But after many hours of running and escaping from big monsters, it felt good to step into a giant mech that made those monsters seem like ants. Turning the tables like this was very refreshing, though it seemed a little out of place to have Pacific Rim-sized mechs in a Gears of War game. They don’t really fit into the story, but they’re a lot of fun to play.