It’s not easy to keep people playing the same game for years. To do so, you need a lot of content. You studios have to make so much stuff that you might overlook creating anything interesting.

Destiny: Rise of Iron is the latest expansion for the online shooter for PlayStation 4 and Xbox One. Since its launch in 2014, the massively multiplayer game has gone through a lot of changes, most notable in last year’s expansion, The Taken King. That release fixed many of Destiny’s convoluted leveling and equipment systems, while giving us a story that we could actually become invested in.

Rise of Iron, meanwhile, adds new missions, multiplayer maps, weapons, and more. Basically, all the stuff you would expect from an expansion.

And not much else.

Even when I’m gone from Destiny for a long time, I’m comfortable once I get back into things. Destiny has sported great shooting mechanics since its 2014 launch. Some console shooters can have slippery, imprecise controls, but Destiny has always felt smooth and responsive.

The grinding also feels rewarding. If you don’t play a lot of these role-playing style games, grinding means the repetition of often mundane tasks to receive better equipment. That might sound like a negative thing, but a lot gamers (myself include) enjoy the personal progress that comes with grinding. Destiny gives players things to do every day, either by completing missions alone, taking on group content with friends, or fighting against other players. Everything has a chance to net you sweet loot.

Above: Felwinter Peak pretty from above.

If you’ve played Destiny, you know about the Tower. It’s the place you go between almost everything else you do. It’s where you can store items, get engrams encrypted (which gets you equipment), read mail, and accept missions. It’s also a place to easily find other players.

Rise of Iron gives you a new social hub, Felwinter Peak. While the Tower has a sci-fi look, Felwinter Peak is an almost medieval place. It’s nestled against a snow mountain, making it look like something from A Game of Thrones. It’s a beautiful place, and I enjoy having a new city to go besides the Tower. It’s also the place where I had the most fun in all of the expansion simply by climbing up a secret mountain path.

It’s difficult for me to critique Rise of Iron without bringing up The Taken King, last year’s expansion that was something of a reboot for Destiny. It streamlined many of its convoluted systems, put a bigger emphasis on story, and introduced new sub-classes to each of three main classes, which essentially gave players a new tree of skills to unlock. The Taken King reinvigorated Destiny. It almost felt like a different game.

Rise of Iron is not The Taken King. It doesn’t revamp much of anything. Instead, it just adds more. New missions, new guns, new group content, new maps … and that’s it. It doesn’t surprise you. It’s just more Destiny.

And at this point, I don’t know how much more Destiny I need. It’s now two years old. Some online games can last for over a decade (just look at World of Warcraft, which is almost 12 years old). But Destiny isn’t as expansive as many other MMOs. You can see most of the content in this expansion within a month. 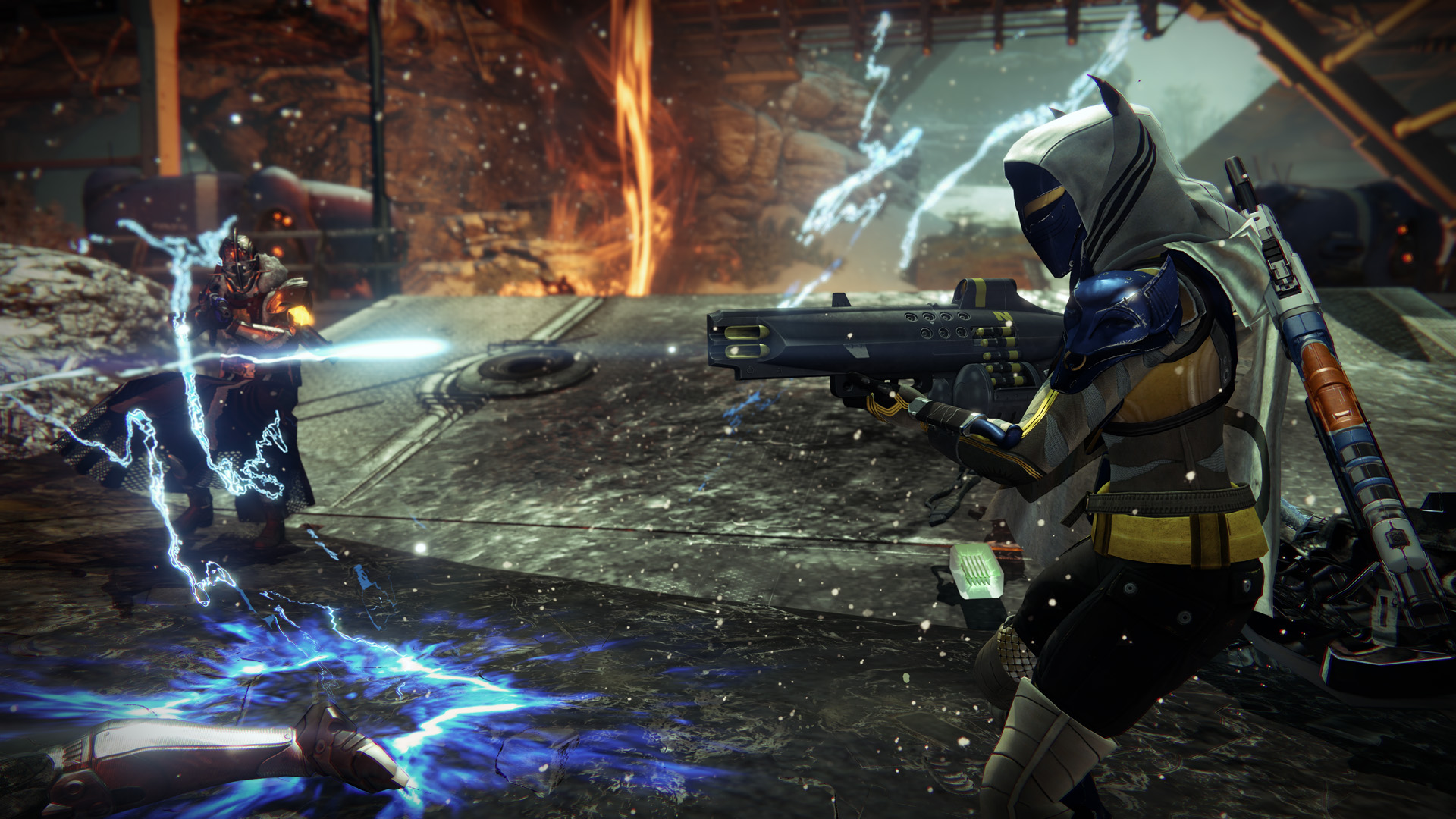 Above: Shoot ’em all.

At that point, you settle into the grind — repeat everything you’ve done and hope to get better rewards. But I just don’t want to be playing Destiny that much longer. My interest in the universe was at a high with The Taken King. I was actually beginning to care about some of the characters. But here, everything feels like rote game design again.

It doesn’t help that none of my friends are still playing. It’s hard to play an online game like this without buddies, and Bungie still has done a poor job of building in-game social features for Destiny. I had trouble finding groups of people to do missions with and more.

This is a safe expansion. Maybe that’s a smart idea after the success of The Taken King. After so much revamping, maybe you don’t want to throw too much new ideas at players. Just give them content. But that philosophy has made Rise of Iron predictable.

It’s short campaign had the same kind of firefights that I’ve seen in dozens of missions before, with only the final one offering an interesting twist (that I won’t give away here). The new enemies seem indistinguishable from the alien’s I’ve shot thousands of times before. The new multiplayer mode is just a variation on standard team deathmatch. Instead of getting a point for killing someone, you also have to pick an orb they drop when they die in order for it to count. Again, it’s fun. It’s as fun as The Taken King’s multiplayer. But it doesn’t feel new or interesting.

Ask me about anything new in Destiny, and I’ll tell you it’s fine. Little elicits much more of a response.

If you love Destiny, Rise of Iron gives you enough new content to keep you invested and interested Bungie’s online shooter. But for more casual players like me, you won’t find anything here to really excite you. It’s just more. It’s all at the quality you’d expect, but little of it breaks through as exciting, creative, or daring.

Rumors say that next year’s Destiny 2 could be a reboot for the series. After playing Rise of Iron, I think that would be best. I understand that it’s unreasonable to expect every expansion to be as big as The Taken King. But when they only come once a year, it’s hard to settle for less.

Destiny: Rise of Iron is out for PlayStation 4 and Xbox One. The publisher sent us a digital copy of the Xbox One version for this review.