I have no musical talent, and I’m even bad at playing faux guitars. So, I was a very bad guinea pig to try out Rock Band VR, the latest version of the guitar-strumming game coming from Harmonix Music Systems for the Oculus Rift virtual reality headset.

I played the title at the Oculus Connect event last week, which featured a bunch of new VR games. This version of Rock Band takes advantage of the Oculus Touch, the new controllers that you can hold in each hand to navigate independently in VR. You simply hang one of the touch controllers at the end of the faux guitar, and then you strap on the Oculus Rift to your head. That transports you into the colorful world of Rock Band VR.

Normally, I wouldn’t pick this game up at all. But with some serious hand holding by the game’s audio lead, Steve Pardo, I managed to learn it and play a couple of songs. I put on the plastic guitar around my neck, and then put on the Oculus Rift headset. The company has a new guitar coming out that is compatible with the Oculus Touch, but the VR game will work with numerous earlier guitars as well, Pardo said. The Touch simply hangs at the end of the guitar, allowing the sensors to get a feel for your movement and where you are facing. 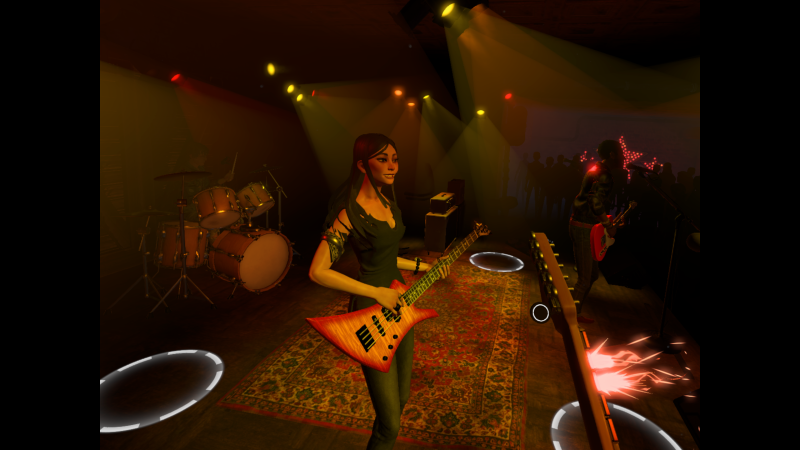 Above: Rock Band VR lets you see your band mates and move to different spots on stage.

I used the whammy bar to navigate through the menu, looking at one spot and then tapping the bar. I went into the tutorial and got a sense for where I was supposed to look in VR. You hold down a couple of buttons that correspond to the right chord you have to play. The fretboard, where my left hand rested, has five buttons. I had to hold down those buttons to match what I was expected to play on the screen. A single line in front of me showed where I was in the song and what notes I had to hit coming up. With my right hand, I had to keep strumming the guitar by tapping the white strum bar. The more accurately I played the pattern in front of me, the higher my score.

Then, I went into a song by The Killers. Rather than look straight ahead at the screen and try to see colorful bars coming down a track (where it seems like the colored notes are flying at your face), I was surprised at what I saw. I could see a crowd of animated people in front of me and my fellow band members on stage. The stage has different spots, and you can hit the whammy bar to move to them. To start the song, I didn’t flip a button. Rather, I physically turned around and looked at the drummer. That was the cue for starting.

“We designed a whole new kind of gameplay around being on stage,” Pardo said. “We tried to make it a real onstage experience that includes the crowd and the band mates.” 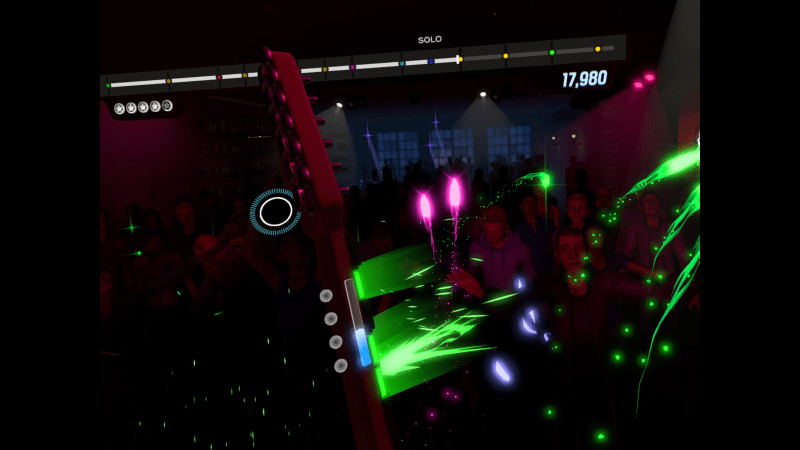 Above: Rock Band VR’s fret bar tells you if you are hitting the right notes.

I had to watch the timing bar at the top of the screen. That line had indicators for verse, chorus, and bridge. It had various colored spots representing chord changes.

But I also had to look down at the end of my guitar, on the head stock, to see the light indicators that told me which combination of buttons to hold down. That means I could look around at my fellow band members, look at the crowd to see their dynamic reaction to my playing, and then look down at the fretboard to figure out what notes to hit next. The game awards points when you switch the chord at the right time. If you are hitting the right buttons, then you see colored flames shooting from the fretboard.

You can never hit the wrong chord in this game. Rather, it sounds a little different depending on which notes you hit. If you do well, you go into 4X overdrive and hold the guitar upright to score more points. That’s where the sensing by the Oculus Touch comes into play. You can also move into a solo at various points in the song. 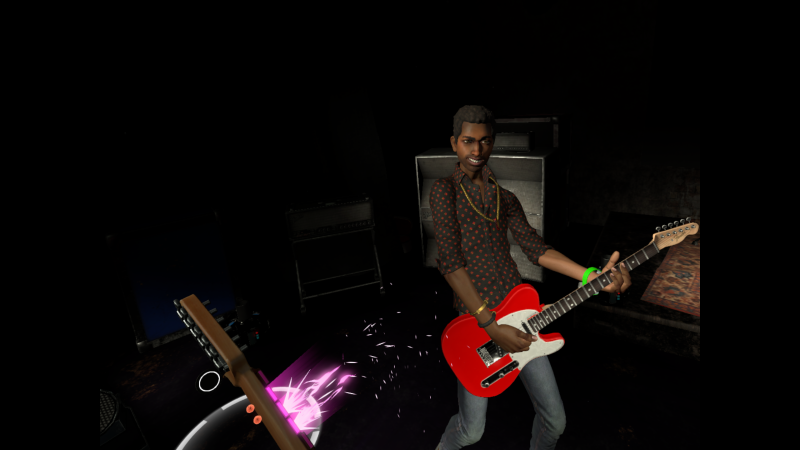 Above: Rock Band VR lets you look around at the band while playing.

I got a real sense that Rock Band VR was trying to keep me immersed in the fantasy of playing in front of an audience, one that I could make happy or mad, depending on how well I played. The developers do a good job forcing you to look around.

“We’ve got a campaign with a full multi-hour experience,” Pardo said. “In the campaign, you get to know who your band mates are. You get to switch from spot to spot on stage mainly because it’s fun to see it from a different point of view and be next to the different band mates.” 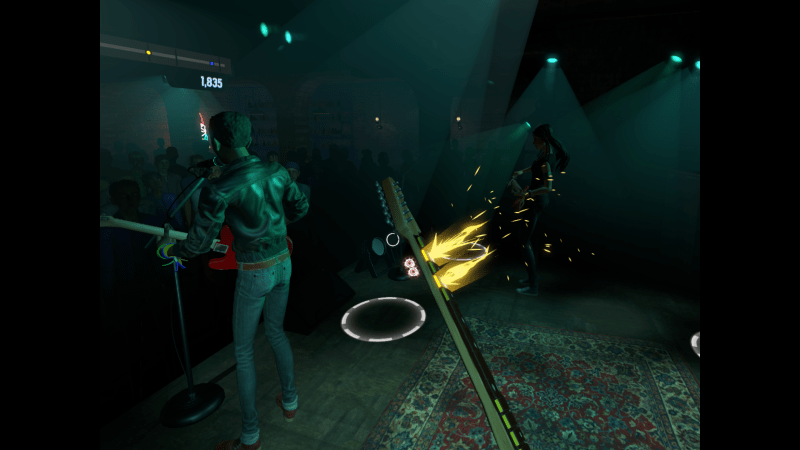 Above: Rock Band VR shoots flames from your guitar if you are doing things right.

One thing that was good about it was that I couldn’t see anyone who was watching me. That always makes me self-conscious. But with the headset on, I couldn’t see them, and with the music playing so loud, I couldn’t hear them either. That was a little bit liberating. So I started swaying back and forth once I figured out how to hit the right notes.

Of course, the game has a virtual audience. When I hit the right chords, the crowd cheered. When I didn’t, they became silent and stared at me. That was a bit intimidating, but the crowd was fairly forgiving. That part is quite similar to Activision’s Guitar Hero Live video game, which came out last year. I felt that I actually learned quite a bit moving from the first song to the second song. So that was a plus.

You can still play the traditional note-based gameplay mode if you wish, but it’s not the major game mode. The title will ship with something like 60 songs when it is released. No release date exists yet.