Hillary Clinton’s presidential campaign has created a bot that texts you quotes from Donald Trump.

The bot was highlighted in a tweet today by creator and Clinton campaign designer Suelyn Yu. It draws on the same backend database as Literally Trump, a hillaryclinton.com fact-checking page used during the first presidential debate, a Clinton campaign spokesperson told VentureBeat in an email.

The Clinton campaign also launched the I Will Vote Facebook Messenger bot today. It helps you register to vote or verify that you are registered to vote. It can also point you to your local polling station, and it says it can answer “any questions you have about voting.” The bot was made by the Hillary for America tech team, said campaign CTO Stephanie Hannon in a tweet today.

The Trump Text bot was originally released Sept. 26, a Clinton campaign spokesperson said, the same day as the first presidential debate, but was not promoted until around the time of the second debate.

That means that in the wake of the first and second presidential debates, the Clinton campaign has strategically deployed bots as part of its strategy to beat Donald Trump.

The Text Trump bot closely resembles BFF Trump, a Facebook Messenger bot that also sends you some of the most offensive things Donald Trump has ever said. The bot aimed at young voters was made by SS+K, an agency with a history of working with the Democratic Party. SS+K also redesigned the Democratic Party logo, according to Fast Company. In recent days, BFF Trump has been one of the most popular bots on Botlist.

After you sign up to receive text messages, the Clinton campaign bot imitating Donald Trump demands that you respond to its messages or you’re fired. Once you start chatting with the bot, type “source” after any quote and the bot will send a link to an article, video, or transcript that includes the quote. People who chat with the bot are encouraged to send screenshots of their favorite quotes from or about Donald Trump on Twitter.

Eventually, the bot will ask you if you want to receive promotional SMS messages from the Clinton campaign or ask you to give $5 to the campaign. 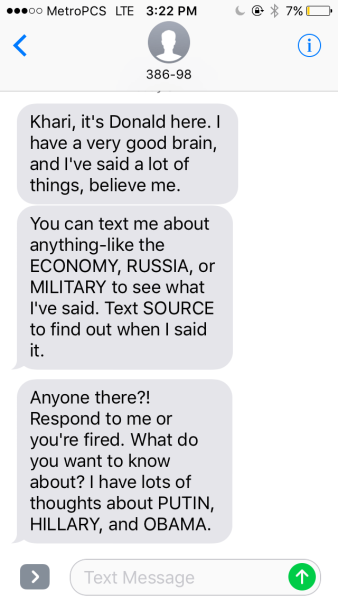 Several bots have been made this year to imitate Donald Trump, register voters, or help people learn about the presidential candidates.

HelloVote helps people register to vote in less than two minutes. Updated today, the Ask Donald and Hillary bot can answer any questions asked at debates as well as responding to more than 100 topics that have come up during the 2016 presidential election race. The bot is made by the startup SapientX and pulls audio from recordings of the presidential candidates by public media.

“If you’re going to cast a vote, make sure you’re casting a vote from a position of intelligence and knowledge, and don’t let the propaganda from either side sway you,” SapientX board of advisors member Jonathan Hirshon told VentureBeat in a phone interview earlier this year. “Make your own decision based on what the candidates themselves have said and that we’re showcasing. Don’t let the media sway you one way or the other. Make your own informed decision,”

Updated 6:19 p.m. Oct. 10, 2016 to include additional information about the I Will Vote Facebook Messenger bot.