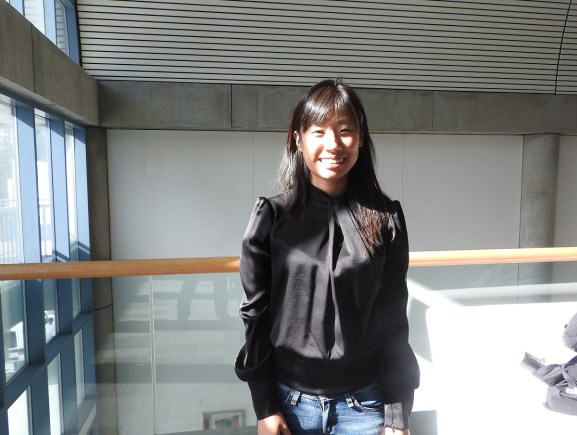 And last week, Baobab debuted Asteroids!, the second episode of the Redwood City, Calif.-based studios’ VR series. The company was founded by Darnell and Maureen Fan, a former vice president of games at Zynga, to make interactive entertainment that blends elements of film and games together for the new medium of VR. The Asteroids! VR short film debuted last week at the Oculus Connect event in San Jose, Calif. The full film will debut in 2017.

The creative touch and pedigree at Baobab enabled the startup to raise $6 million last year as part of its effort to tell new virtual reality animated stories. The funding came from Comcast Ventures, HTC, Samsung Ventures, Zynga cofounder Mark Pincus, PayPal cofounder Peter Thiel, Advancit Capital, Chernin Group, and Freelands Ventures. I caught up with Fan last week at the Oculus Connect event, where she talked about what the company is trying to achieve.

GamesBeat: Tell us what you are doing.

Maureen Fan: Invasion! came out earlier this year. It premiered at the Tribeca Film Festival, and then we did Cannes and Toronto. Based on the reception—I’m not allowed to say the ranking, but it did very well. We knew that people liked the characters. Roth Films recently announced—their production studio did Huntsman, Maleficent, all the Alice in Wonderland. They’re partnering with us to do the feature film version of Invasion, because this did so well. Because people really liked the first VR episode, though, we decided to do another one. That’s Asteroids, which is debuting here.

Eric Darnell, my co-founder, he directed and wrote the four Madagascar films. We’ve been around for about a year now. We want to do storytelling in VR. A lot of people talk about storytelling, but some stories are documentaries. Some stories are the news. That’s different from three-act structure storytelling that Eric is passionate about.

We want to experiment with what it’s like to make you a character inside a film. What if you were Aladdin or Beauty in Beauty and the Beast? What does that feel like? Is is like a game, a film, or something in between? In Invasion, if you see the version on the Rift, when you look down you actually have a bunny body. When you squat the body gets fatter. People actually jump around in it, especially in the Vive version. You can jump around the entire room. The other characters follow you based on where you are.

The parts people were most excited about is when the bunny sniffs you. People started trying to touch and pet it. They even tried to dance when the bunny’s dancing with you. Later, when the bunny hides behind you, people would say, “I know it’s not real, but I feel its breath on my shoulder. I’m the only thing between that bunny and the aliens and I need to protect her.”

We realized, for episode two, that we wanted to explore those themes even more. The setting for Asteroids is in outer space, on their spaceship. They go out in the galaxy and they’re sharing a warm moment between their daily chores. You get to see what that’s like.

GamesBeat: Are you doing this exclusively for Oculus, or is it just showing here?

Fan: Right now it’s on Gear VR, but as a company, in general, we’re platform agnostic. Invasion is on just about every platform. It’s going to be on PS VR. It was included for Daydream. We’re on the Daydream home page and in their commercial that launched yesterday. But for Asteroids specifically, we’re debuting here and it’ll be on Gear VR first.

GamesBeat: Have you been able to make money with these?

Fan: The first look is going out for free. Invasion was free, because it was the first thing we did. In the future we’ll want to monetize, but right now these experiences are free.

GamesBeat: The full-length features, are you shooting for–

Fan: We didn’t really plan on the full-length feature. As a startup it’s important for us to focus. We do VR well. Roth does feature film well. They liked our IP. That’s when we saw that there was an opportunity to partner. But when we showed Roth, it wasn’t with the intention of doing that. We’re just showing people VR. They said, “We’re interested in turning this into a feature film.” We thought about it and decided that was fine, because stories can be sourced from anywhere. Why not VR?

It’s the first of its kind, which we’re happy about. It’s validation that our IP is good, which should be obvious from Eric’s track record. That’s one of the reasons Hollywood likes us, his proven creative background. But still, it’s nice to have validation. This was our first film. For it to get that much excitement made us really happy.

GamesBeat: How many people are in the company?

Above: See a bunny in VR in Baobab Studios’ Invasion!

GamesBeat: Are you going to do a whole series of episodes?

Fan: Yes. Invasion was always conceived as several episodes. Eric already created a lot. We have more than a dozen IP that he’s created and we’re choosing the first one to go out with. Invasion was the first of those. I was at Zynga for six years as vice president of games. Everything that’s drilled in to me is about testing. Based on the reception of Invasion, that’s how we knew to continue on with the rest. But we already had them ready.

Fan: With the Gear version it’s not interactive. It’s 360 video. But in the Rift, Vive, and PS VR versions, it’s interactive. Especially since we’re trying to push what it means to be a character inside it. Interactivity is absolutely important. Especially since we saw that the parts that bonded with people the most were the parts where the interacted with the characters. That’s a learning Eric had. But he doesn’t ever want it to feel like a game, where you’re doing something because you’re trying to get to the next level. He wants you to act out of compassion. You care about this character, so you want to do something with them. That’s what we’re trying to explore.

Everyone wants to know whether this is a film or a game. It’s neither. With games, you’re usually the main character. But you do things because you’re thinking, “What does the game-maker want me to do?” In a film it’s the opposite. It’s completely passive. You stop thinking about yourself. You empathize with the characters.

When you put yourself inside a VR experience, what Eric wanted to avoided is making it feel like a game. He didn’t want the viewer to worry about themselves. He wants you to care about the other characters. Invasion was his first experiment in that area. What are ways to put you in the experience without feeling pressured, without feeling as if there was something specific the creator wanted you to do? I think we succeeded at that.

It’s kind of like a game, because you’re a character and it’s running in a real time engine. But it feels like a film because it’s a narrative experience. It’s not entirely one or the other.