The NBA 2K franchise’s MyCareer mode is moving in a more theatrical direction, but on-the-court dominance will always be its main focus. To that end, it’s time for the latest installment in GamesBeat’s annual NBA 2K guide series, NBA 2K17: A New Hope.

NBA 2K17 changed up MyCareer creation quite a bit with the reintroduction of player archetypes (slasher, lockdown defender, etc.), changes to the progression system, and a major overhaul to your player’s off-the-court life. Don’t be scared, rookies, we’ll get through this together.

If you missed last year’s guide or its predecessors, here’s a quick rundown of how this works: I take you through the creation and progression process of your MyCareer player step-by-step until you reach an all-star caliber level, you’re on your own. I play on the second-highest difficulty (the highest setting makes your teammates too terrible) with 12-minute quarters, offensive playcalling set to auto, and play diagrams set to full (meaning it shows you exactly where to stand and move).

This is the first year NBA 2K has allowed us to create an honest-to-goodness stretch big, a power forward or center that prefers to shoot from far away (think the Dallas Mavericks forward Dirk Nowitzki). In previous editions, players had to cheat the system to create this increasingly popular archetype by building a tall small forward and placing him on a team with a whole at power forward.

As it is the stretch big’s first year of 2K existence, this guide will show you how to create a big man capable of punishing defenses from every spot on the court. Here is a spoiler-free guide to creating a dominant power forward. 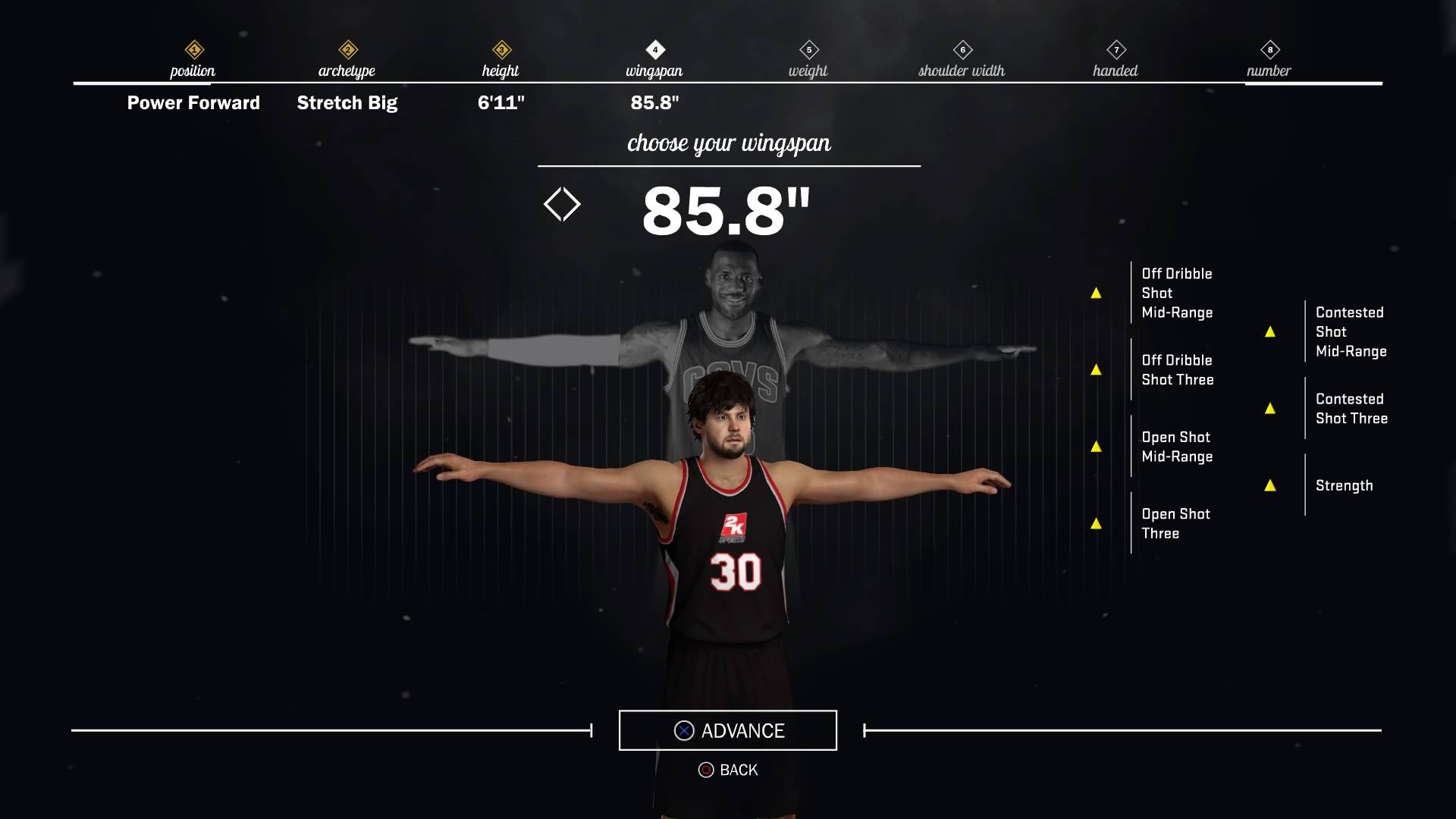 Create a power forward, and select the stretch big archetype. You could create a center, but having a tough rebounder inside the paint while you bomb threes is much easier. Most power forwards shoot from three-point range in today’s NBA, so creating a center would mean all five of your players will be fighting for open three-point space with no one inside.

Set your height to around 6 feet, 11 inches. Taller height has a negative impact to many key stats, but a character this big will be able to rebound and block shots with little skill point investment. Keep your weight at around 250 pounds and drop your wingspan a few inches to increase shooting and athletic attributes, which will be your most important as you go forward.

After that, level up each stat a few clicks, as the first few upgrades are pretty cheap. Then prioritize agility, which will allow you to get open more often. Move on to mid-range shooting and off-the-dribble, which will help your overall shooting.

Playmaking and rebounding are your lowest priorities. Playmaking doesn’t matter to a big guy, who shouldn’t be dribbling or making too many passes. Rebounding isn’t necessary because your height and (hopefully) your ability to press the jump button at the right time will allow you to gobble 20-plus boards with ease.

Earning badges (upgrades that you can’t buy) is different in NBA 2K17. You will only be able to upgrade a handful, which depend on your archetype. For the stretch big, they are all shooting-related. Make a lot of threes, and you will unlock them. Once you unlock the bronze versions, upgrade them to gold immediately.