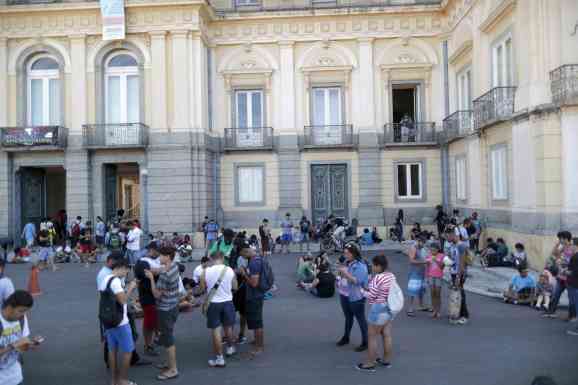 Pokémon Go kept plenty of non-athletes active at the Olympics in Rio.

Your obsession with catching ’em all could keep you alive longer.

Highly engaged Pokémon Go players are getting an average of 26 percent more physical activity than they were before playing the mobile game, according to a study from Stanford University and Microsoft Research available on the Cornell University Library. The experiment found that people who are “particularly engaged” in the Google Maps-powered location game that has players walking around their real world in search of digital monsters are getting 1,473 more steps per day on average, and that has a real benefit on health and could increase life expectancy. The authors of the study estimate that the game is responsible for adding 144 billion steps to U.S. physical activity since it debuted in July. That’s on top of the its domination of the $36.6 billion mobile gaming market with hundreds of millions of downloads and dollars spent.

“In the paper, we go through a life expectancy analysis based on the assumption that Pokemon Go would be able to sustain a 1,000 steps/day increase,” Stanford scientist Tim Althoff explained in a note to GamesBeat. “[That] is roughly an 18 percent increase for our users. We find that life expectancy would increase by an estimated 41 days per users. Across the 25 million US Pokémon Go users. This would translate to 2.825 million years additional life added to U.S. users. That highlights the massive impact that games like Pokémon Go could have on public health.”

For this experiment, Althoff and Microsoft researchers Ryen W. White and Eric Horvitz looked at data from the wearable Microsoft Band computer and search-engine logs (to measure engagement) for 32,000 people over a three-month period. Using the search queries to determine who is playing Pokémon Go and how much they are playing it, the researchers were able to compare that to the activity from the Band’s accelerometer sensor to determine a correlation between playing the game and walking more often. The results suggest a strong correlation that reaches far more audiences than typical health-related mobile applications.

“Personally, I’m most excited about the wide reach of Pokémon Go that makes this a physical-activity intervention at [an] almost societal-scale, if you will,” Althoff explained. “Many interventions only reach already active people, and we find that Pokémon Go actually did increase physical activity in large amounts for those that were very engaged with the game. Across the 25 million U.S. users that played during the first months after release, Pokémon Go added an estimated 144 billion steps to U.S. activity. On the other hand, other health apps we studied only drew from an already more active population. ”

Of course, this is only a single study, and it does have limitations. The researches were only able to look at people who are able to afford the $250 Microsoft Band for tracking activity and who were willing to share their data for research purposes. And determining engagement with Pokémon Go based on search data is not a perfect method — although it is likely reliable enough for the purposes of this research. Finally, the claim that this game or others like it could have significant long-term public-health benefits needs to go under deeper scrutiny.

“I think the big question is whether these games can sustain long-term engagement,” said Althoff. “Even if it’s not at the massive scale of tens of millions of users that started out playing, these games could make a really valuable contribution to public health.”

The Stanford researcher said that he hopes to see future research look into a handful of fundamental questions.

“Physical activity is critical to human health and Pokemon Go players might realize that they actually feel better after being more active,” said Althoff. “[So are] there any signs of sustained behavior change? Who are the types of people for whom these types of games work well, and who continue to be more active than they would have been?”

With the amount of money that Pokémon Go is generating along with the potential money that a more active population could save in terms of health-care costs, it’s likely that we’ll get more studies that attempt to replicate the Stanford/Microsoft results as well as additional exploratory research to prove a link between games and physical activity.