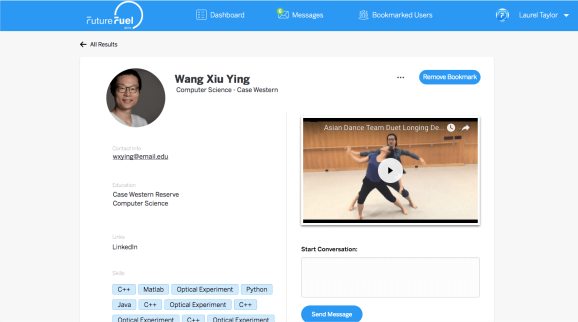 A user profile in FutureFuel.

Graduating college is a major milestone in many people’s lives, one filled with a sense of accomplishment. But one part of that occasion everyone could do without is having to come to terms with student debt. It’s said that the average amount owed or an undergraduate degree is more than $35,000, which takes between 17 and 20 years to pay off. This means less money is invested in people’s retirement plans or available for other expenses.

FutureFuel claims it has a way to tackle this problem, and it’s enlisting the help of other companies. It’s operating a marketplace that matches young working professionals (those with less than 10 years of experience) with businesses that not only provide a suitable salary, but offer an added bonus that’ll go toward reducing the employee’s debt over the course of three years. The service is launching in beta today and believes its mission will foster company loyalty over the long-term.

Founded by Laurel Taylor, FutureFuel may initially seem similar to LinkedIn and other job placement services, but its focus is squarely on the nearly 70 percent of all students who graduate with debt. So while the major players in the space provide general networking services, FutureFuel is going after a specialized demographic, those who want a job that matches their career choices but that will also free them from this financial burden.

“I have had a ton of student debt myself. It is a misconception that if you have a great job, student debt doesn’t matter. It does. In fact, at the time of retirement, those who graduate with student loans have a shortfall of $640,000, baseline, when benchmarked against peers who graduated without debt. I knew this intuitively, because I had lived it,” Taylor told VentureBeat. “When the average student loan payment is $500+, it is no wonder only 30 percent of millennials contribute to their 401(k). Missing out on wealth-accumulating events, like 401(k) contribution during peak years, has long-term implications from a wealth gap perspective.”

Initially, FutureFuel is targeting those in science, technology, engineering, math (STEM), and those in clinical fields, such as nurses and physician assistants. These candidates, especially those with less than 10 years of experience, are eligible to join the beta launch. “These professions represent industries of scarcity, where market demand far exceeds supply of human capital,” Taylor explained.

You can sign up with your email address or LinkedIn profile to create an account. But unlike a traditional resume, your profile will contain not only links and skills, but also videos, which Taylor said will provide “a better view into characteristics.” Real-time messaging is included.

Candidates can use FutureFuel for free, but the company is testing plans around monetization, including rolling out subscription membership or a finders fee should a candidate be successfully placed. Companies wishing to participate need only commit to providing 5 to 10 percent on top of existing salaries as a “bonus” that will go toward reducing the student’s debt.

FutureFuel is a mobile-first service, and while there is a website, all the interactions and features are available through the company’s app, which is currently only for iOS devices. It’s also limited to those in the U.S., though there are plans to expand globally in the future.

Taylor declined to disclose user numbers, but she said that FutureFuel’s goal is to help 100,000 people find jobs and to reduce student debt by $3 billion in the next four years.