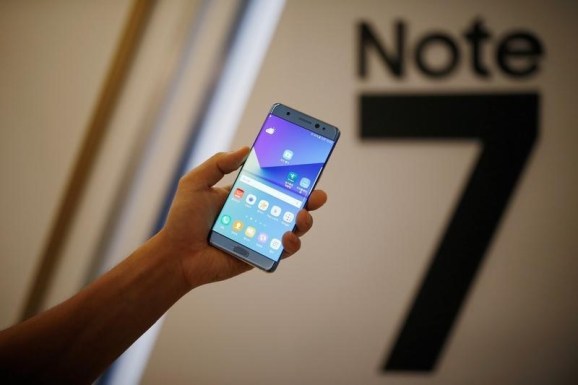 A model poses for photographs with a Galaxy Note 7 new smartphone during its launching ceremony in Seoul, South Korea, August 11, 2016. REUTERS/Kim Hong-Ji/File Photo

Samsung has announced it is permanently halting production of the Galaxy Note7 smartphone, a gadget that was intended to propel a comeback but instead has engulfed the South Korea company in a major corporate crisis.

Samsung had been on a roll earlier this year with the introduction of the Galaxy 7, which saw its mobile sales pick up after a couple of rough years. The Galaxy Note7, with its bigger design and stylus, also came just as rival Apple was seeing a first-time-ever slump in iPhone sales.

Any sense of victory, however, quickly turned sour amid reports of exploding Galaxy Note7s. The company initiated a clumsy recall process that left consumers confused and angry. Samsung seemed to finally stop the bleeding with the delivery of replacement units.

In recent weeks, however, new reports emerged that at least three replacement units had exploded. Yesterday, Samsung announced it was “temporarily adjusting” production of the phone following reports that several replacement devices had exploded.

But today, the company confirmed it was shutting down production and telling all partners to stop selling whatever inventory is left, according to a statement given to Bloomberg.

By Tuesday afternoon European time, it appeared Samsung had removed all references to the Galaxy Note7 from its website. (A cached version of the site is here.)

News of the decision hit the company hard, as investors sent its stock down 7.5 percent.

It remains to be seen how much long-term damage this will cause Samsung, which evidently has not been able to pinpoint and fix the problems causing the explosion. And it’s also unclear how much Apple, which just launched the latest version of its iPhones last month, will benefit.