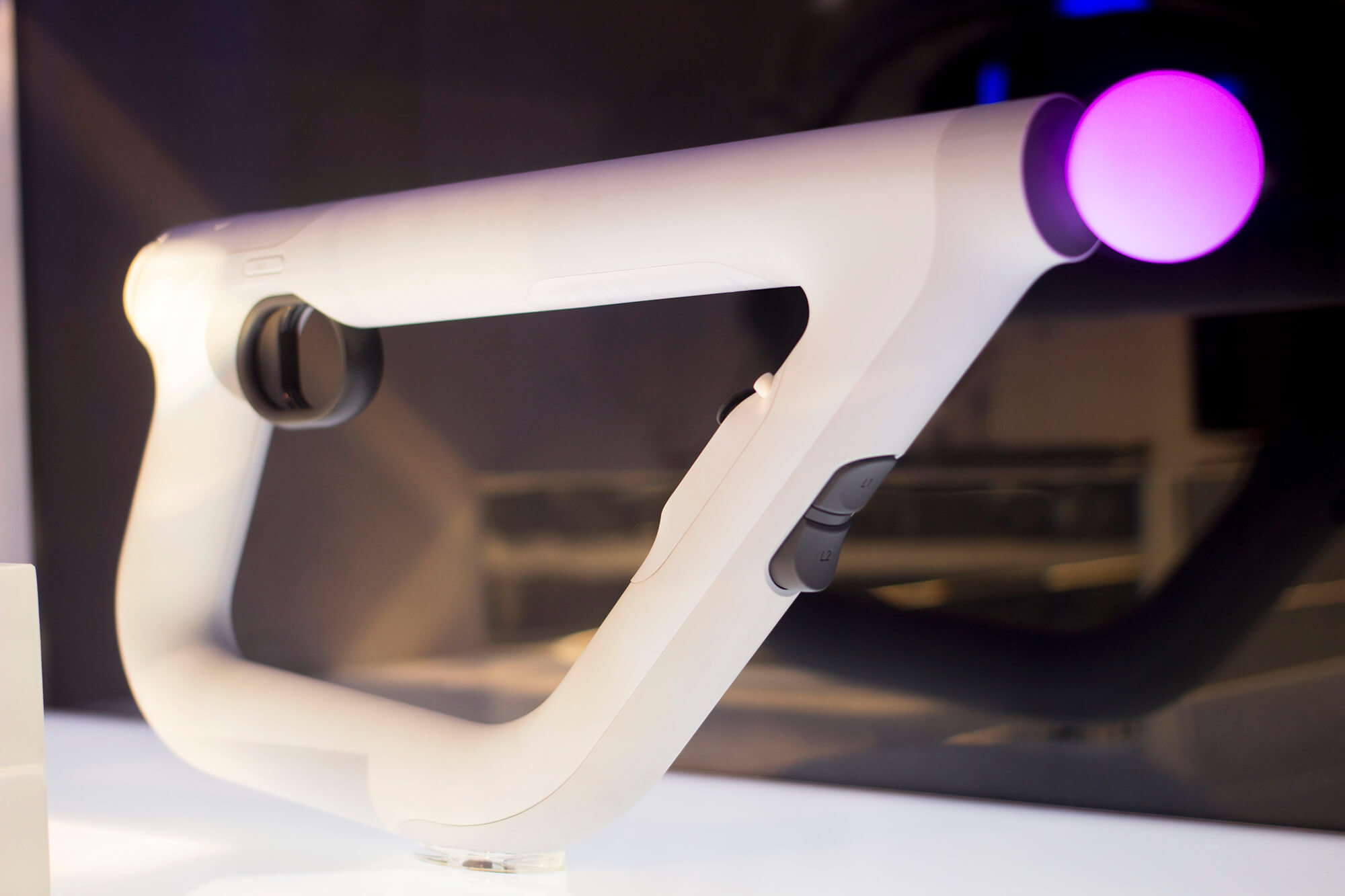 PSVR isn’t cutting-edge in all aspects. The underlying tech that powers the tracking is the generation-old Move concept that Sony built to compete with Nintendo’s Wii motion controllers. The company has upgraded the camera, but it does not compare favorable to what others in the space are doing.

Above: This is the HTC Vive. I would not recommend trying this with the PSVR.

The end result is that PSVR can sorta tell where you’re holding the Move wand, the DualShock 4 controller, or your head in 3D space, but it’s nowhere near the precision you get with Vive or Rift. HTC’s controllers, for example, are about as accurate as a standard PC mouse. That means the SteamVR-powered hardware can sense millimeter changes in position. PSVR isn’t anywhere close to that.

Instead, Sony’s tracking always feels off. In the VR world, the DualShock 4 often looks like it is sitting 6 inches or sometimes even a full foot away from where you’re holding it. It is also constantly jittering as the CPU and camera struggle to calculate its values in an X, Y, and Z matrix.

This breaks the illusion of VR so often that I don’t know if I even once felt presence in a PSVR game. It’s difficult for a game to sweep me away when I pick up a lighter and it starts floating off wildly into the distance.

Broken tracking will test your patience

When the camera loses track of the headset, games will always flip out. Even when the system hasn’t lost my position, I occasionally get a warning about moving out of the play area. I see that most often when I try to sit on the couch in front of my TV — that’s frustrating. And when the headset is working fine, you still have other points of failure like the DualShock 4 or Move. It is infuriating when you go to pick something up in a game and your digital hand stops moving suddenly because the camera inexplicably loses the position of your real-life hand.

But the tracking issues get worse.

In multiple games, I’ve experienced an awful sensation where the tracking is wrong. For example, when I lean forward, the in-game world should compensate by only leaning back and forth. Instead, many games will interpret my motion as also moving side-to-side. So I get this head-swimming sensation that I’m on some sort of sailboat on the high seas. This happened to me over and over in multiple games and with multiple camera placements.

I finally was able to minimize that horrible effect, but it required me to set my camera far below my television on a separate stand. And, even then, I still notice some unwanted lateral motion as I move my head around.

You have to confine yourself to its limitations

All of those tracking issues really highlight the worst thing about PlayStation VR: you need to adjust your furniture and everything in your life around its limited capabilities. That might sound similar to what you have to do with the HTC Vive, but it’s not the same thing at all.

The Vive is capable of doing something called “room-scale VR.” It requires you to set up two light-tower base stations in a space as large as 10 feet-by-10 feet. For most people, this means you’re going to need to move couches and tables to make space in order to take advantage of that feature.

With the PSVR, you are limited to a much smaller “play area.” This is a sweet zone that is about 5 feet from the camera. Once you get to about 10 feet away, the entire system breaks down. This, too, will likely require you to move chairs and tables so that you can get in front of the camera.

The difference between the two is that with the Vive, you’re moving furniture because of what’s possible. With PSVR, you’re moving furniture because what isn’t possible. And I’m willing to rearrange my family room to get the most from an amazing new technology, but I’m less enthusiastic about plopping a chair down in in the middle of my room to try to coax a decent experience out of a temperamental piece of equipment.

Even when tracking the tracking is working and is good enough (and “good enough” might as well be the motto for PSVR), the Move controllers are garbage. I like that Sony has a way for me to bring my hands into VR, but you never quite hold the controller in the same way that you hold anything inside of the simulations. Manipulating items like a gun or phone never feels right. Sony made only one correct way to hold the Move, and that doesn’t translate well to mimicking manual dexterity.

The result is that when you do go to hold the Move out in front of you as if it were a gun, the wand feels awkward and uncomfortable.

It should have built-in earphones

I already talked up the design of the PSVR, but I am bummed out that Sony did not follow Oculus’s lead when it comes to audio. To get sound with the headset, you need to plug in earphones or buds into a port that sits on the cable between the device and the PS4. I’m getting tangled in this mess of cords all the time.

As beautiful as PSVR is, I would love it if Sony would’ve built headphones into the headset. That would streamline the entire experience.

PlayStation VR has some serious issues. Tracking is subpar, the screen doesn’t look as great in motion, and I even found the rubber flaps that block light leakage around your nose uncomfortable. But despite all of that, Sony has done what it needed to do with this product. It has made a high-end VR system that is good enough for most people while also coming in at a far more affordable price than the competition.

Now, I originally said in my impressions for the PSVR before finishing this review that it is is “probably the VR headset that most people should get.” And I think that is potentially still the case with some major caveats. If you already own a PlayStation 4, a PlayStation Camera, and Move controllers, then I think getting into a serviceable VR solution at $400 for the Core model is probably the right thing for you to do.

If you want the best that VR has to offer, however, Sony is not going to give that to you. In that case, you’re better off putting your money toward the Vive or Oculus Rift and its Touch controllers.

Sony provided GamesBeat with a sample PSVR for the purposes of this review. PSVR launches October 13.