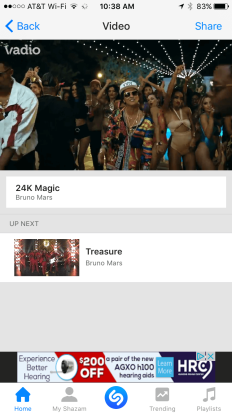 For the initiative, Shazam is partnering with Vadio, a Portland, Oregon-based company that powers music-video streaming through tie-ups with the music industry, brands, and publishers.

Founded in 2000, Shazam is best known for an app that lets you identify songs playing in the background simply by tapping a button. However it has branched out into other media genres, including TV. The company recently announced it reached one billion app downloads since its inception and revealed that it is now profitable.

Shazam’s music video channels can be actioned in a number of ways. For example, if someone “Shazams” a song, they may see a relevant video. Channels can also be curated by editors, generated automatically based on trending data, or created by brands wishing to align themselves with genres — and this hints at a major potential monetization conduit for Shazam.

Last year, Shazam opened its verified artists program to all artists after a limited beta period, allowing fans to follow and see what they are Shazaming. Participating artists include Alicia Keys, Sam Smith, David Guetta, and more. Today, there are more than 1,800 artists verified on Shazam, and with music video playlists now in the mix, this extends the potential for Shazam to lure more brands on board to connect with fans of specific artists.

Shazam isn’t the first audio-centric company to embrace video as a means for growing revenues — Spotify introduced video ads to its free ad-supported service more than two years ago. Shazam says it quietly soft-launched video channels across roughly a quarter of its 120 million active users already, and claims that the average user session has jumped from sub-1 minute to more than four minutes. Now, it’s ready for prime time globally.

Today’s news comes hot on the heels of a handful of new product announcements, including a new Lite version of its Android app, aimed at emerging markets, as well as a new iMessage app.