At long last, venture capital’s long-awaited return to normalcy appears to be happening. VC funding for the third quarter of 2016 slid for nearly every key metric: a smaller number of deals, less total funding, fewer +$100 million mega-rounds, and just eight unicorns created. And that was globally. For North America, generally, and for California, specifically, venture activity was subdued compared to most quarters, though still quite healthy. Some might even call this a return to capital efficiency.

“It’s worth noting that a bit of sobriety is a good thing. 2015 funding levels were irrationally high with a new unicorn being birthed every 3rd day as investors were keen to force-feed perceived startup winners with cash. That was not sustainable,” wrote Anand Sanwal, CEO of CB Insights, in Venture Pulse, a quarterly report published by KPMG International and CB Insights that was released today.

North American deals have steadily declined this year, with only 1127 venture financings worth $14.4 billion during the third quarter of this year, according to the report. U.S.-based startups received the lion’s share of this investment, albeit at a snail’s pace in the aftermath of the 2015 fourth-quarter slowdown. Investment tumbled 18 percent from the previous quarter, down to $14 billion. Without the outsized rounds to companies like Uber and Snapchat, VC funding for U.S. companies slid to the lowest total since the third quarter of 2014.

California, home to Silicon Valley, saw a sharp reduction in venture activity, with New York also witnessing a pullback. Of note, Massachusetts enjoyed a small uptick, with the number of deals rising from 88 to 95.

Funding for California-based companies hit a five-quarter low, as investment has fallen below $8 billion in three of the past five quarters. Last quarter’s temporary rebound was largely due to Uber’s and Snapchat’s mega-rounds. Again, just as Massachusetts enjoyed an increase in overall deals, funding to startups in the Bay State doubled quarter-over-quarter from $1.1 billion to $2.2 billion, thanks to the +$100 million rounds to Moderna, Intarcia, and DraftKings.

A closer examination of California reveals the depth of the venture slowdown in Silicon Valley. Without the combined $1.75 billlion that went to Airbnb, Mosaic, and Uber, funding for Golden State companies would have plunged into the Pacific. 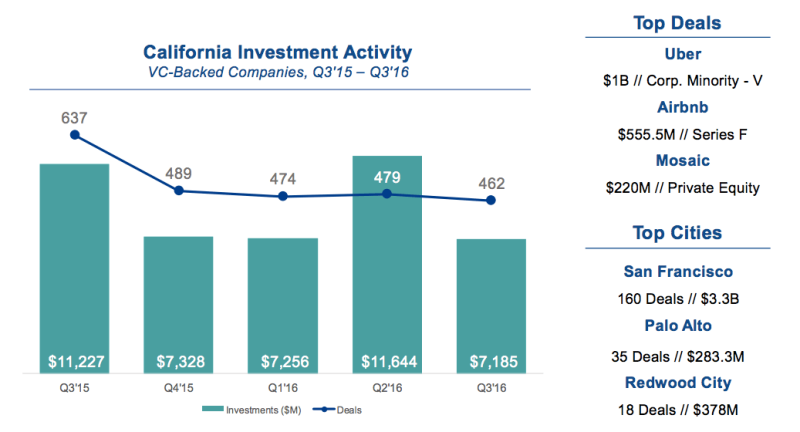 But a glance at unicorn creation helps put this most recent quarter’s numbers into perspective, as we bid farewell to the froth of 2015. Twenty-five unicorns were created in the third quarter of last year, while only eight were minted in the same quarter this year. The previous two quarters each saw only seven companies attain this status, which suggests consistency and normalcy.

It will be interesting to see the impact from the IPOs of Nutanix and Line, as well as the pending debut of Snapchat, on venture activity for the rest of 2016. A regional summary from the report includes: