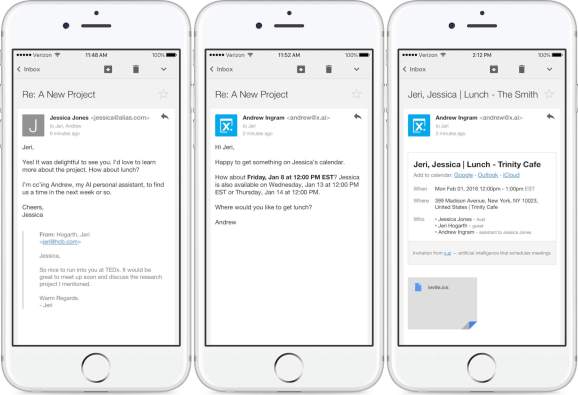 Screenshots of X.ai in action

Nearly three years ago, the team behind X.ai began researching and developing a smart personal assistant to help us schedule meetings and make sense of our calendars. Today, the company’s dream is being realized as it moves out of beta and launches a professional version of its A.I.-powered assistant to the world. For $39 per month, you can schedule an unlimited number of meetings each month, while having access to VIP contacts and personalized signatures.

If you’re not familiar with X.ai, its main products are two “assistants” named Amy and Andrew that you communicate with through email. There’s no app that needs to be downloaded — you just include a special email address in all of your correspondence, asking the virtual assistant to find time on your calendar to set up a meeting with whomever you want.

The company has a free plan that is capped at five meetings per month. But with the professional paid subscription, you can have unlimited number of meetings scheduled.

And X.ai’s paid plan offers two additional features: personalized signature and VIP contacts. The former lets you add a personalized sentence or phrase to Amy’s signature, while the latter allows you to designate colleagues or contacts to receive preferential treatment — they need only reach out to Amy to get time on your calendar.

Employees from Walmart, Salesforce, LinkedIn, the New York Times, and One Zero Capital have already been testing this version. It’s important to note that this professional subscription is specifically geared toward individuals. If you’re looking for enterprise-level support, X.ai offers a $59 per month business plan that not only gives unlimited meetings, personalized signature, and VIP contacts, it will also will place Amy on your domain, provide team management functionality, and integrate with your Exchange server.

“We believe there is significant pain in scheduling meetings for all of the approximately 90 million U.S. knowledge workers. And the only way to relieve this magnitude of pain is to develop a pure A.I. solution at a SaaS price point,” explained X.ai chief executive Dennis Mortensen. “It will take us some time to reach all 90 million knowledge workers. We’ve been slowly rolling out the Professional edition to our beta customers. Startup founders and independent professionals have been particularly enthusiastic about the product.”

Founded in 2014 by Mortensen and cofounders Alex Poon, Matt Casey, and Marcos Jimenez, X.ai is not the only tech company to tackle the problem of scheduling. But while each one has their own way of going about it, Mortenson once told VentureBeat that the focus should not be on “how you set up meetings.” He said, “The point is that you don’t want to. What I need is when I say ‘You know what? I would love to meet up the first week of May. Amy, set something up.’ I know that I want to meet you and when. It’s understanding the objective and handing things over to Amy.”

The public launch of X.ai isn’t unexpected, as Mortensen teased the news in April, when the company raised $23 million in venture funding. But the process to get here from a simple idea wasn’t easy. Over the years-long research process, the company’s CEO admitted that “we never really expected that it would be as hard as it has been to build a single-purpose autonomous A.I. agent, even when you have some of the smartest data scientists in the country working on the problem.”

Other lessons learned include that “people are crazy,” meaning that they don’t always say what they mean, and that the company was smart to “humanize” the Amy and Andrew assistants. “People treat Amy and Andrew as they would a human assistant (they don’t use any sort of special syntax), and their guests often mistake them for humans,” Mortensen shared. But perhaps the most important thing X.ai discovered was that there is a legitimate use case for what the the company is doing: “We found a real product market fit.”

And while the world is fixated on the latest developments around assistant services — such as the newest one from Google and Samsung’s acquisition of Viv — Mortensen shrugs that off, saying he believes there are bigger opportunities for what he calls “vertical A.I.” — autonomous agents focused on performing a single job from start to finish. “We’re vertical A.I., and we’re early. I believe we’ll see the emergence of thousands of vertical A.I. agents over the next half decade, and these will integrate with the horizontal A.I. assistants,” he opined. “Amazon’s Echo and its accompanying skill marketplace is a perfect, yet crude, realization of this vision.”

The company didn’t provide user figures or any additional metrics on usage.