This quarter’s funding was marked by both very slow funding and a small number of overall deals.

Looking at the evolution of company valuations, we saw 19 up rounds, 18 unchanged valuations, and only 1 down round — Wandoujia, acquired at an 80 percent reduced price, compared to its previous $1 billion valuation. The combined value progression for those companies is still a positive $30.42 billion (compared to $75 billion in Q2), suggesting degrading health for companies in the Unicorn Club (those that reach a billion-dollar valuation). 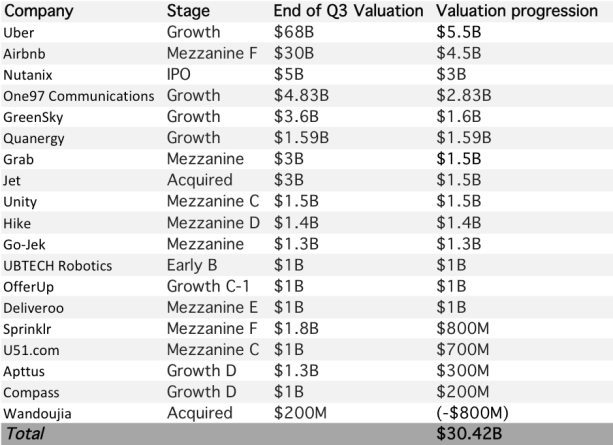 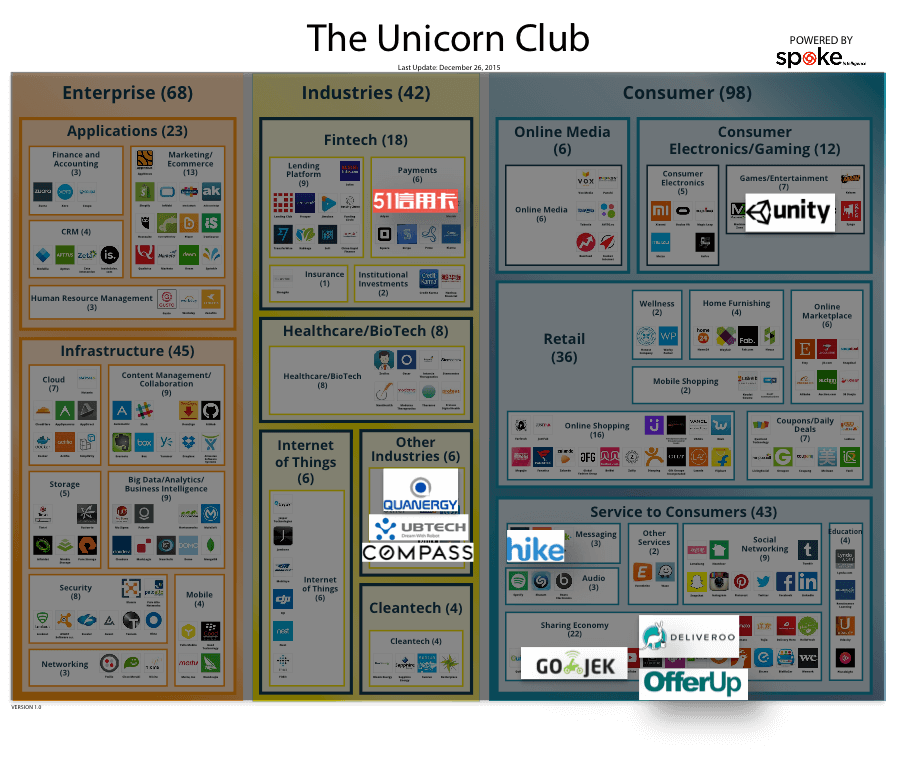 Above: A high-resolution Unicorn Club landscape from VB Profiles is available here. (Disclosure: VB Profiles is a cooperative effort between VentureBeat and Spoke Intelligence.)

Ubtech Robotics: Ubtech secured $100 million for its early series B from CDH Investment. The Chinese maker of intelligent humanoid robots will be exploring more applications in education and entertainment.

OfferUp: The U.S.-based company raised 119 million in a series C led by Warburg Pincus, at a $1 billion valuation. The mobile marketplace for local buyers and sellers came out of stealth in 2015 and will use the capital to improve its user experience and expand to new markets.

Deliveroo: The food delivery service company raised $275 million, making it one of a handful of startups attracting investments in the competitive food delivery market.

Compass: After its $75 million series D round, the real estate platform will focus on growth into new markets and will further its seamless and intelligent home buying, selling, and renting experience for consumers and agents.

Unity: Valued at $1.5 billion after an $181 million series C led by DFJ, Unity is the largest global development platform for creating 2D, 3D, VR, and AR games and experiences, from Indie to Triple-A games.

Hike: WhatsApp’s rival unicorn in India raised a $175 million series D round led by Tencent, at a $1.4 billion valuation. The four-year-old messaging app startup is the first billion-dollar social company in India.

One IPO and two acquisitions

Nuantix announced in September that it had raised $237.9 million in its IPO. The California-based data center infrastructure provider had first filed paperwork for its IPO in December, but it held off on the proceedings for several months. The company was valued at $5 billion on the day of the IPO, up $3 billion from its last valuation in August 2014.

Jet.com was acquired by Walmart for $3 billion after many weeks of rumors. Jet.com CEO Marc Lore will remain in position and focus on Walmart’s U.S. ecommerce operations. The startup offers Walmart the ability to identify orders — in real time — that should be routed to an appropriate vendor in order to keep costs low and facilitates discounts on large orders.

The Chinese Android app store Wandoujia was acquired by Alibaba and incorporated into its mobile unit business. Wandoujia, once valued at $1 billion, was acquired for a mere $200 million after suffering from increased competition from smartphone makers like Huawei and Xiaomi, who opened their own app stores.