Battlefield 1 is here at long last — for some of us. I played my first multiplayer match on the Xbox One as the first servers went live.

This game is one of the biggest titles from Electronic Arts and its DICE studio since the Battlefield franchise was born in 2002. The developers took the risk of leaving the familiar modern war environment for the novelty of World War I. It’s an epic game that spans many different environments, such as Saudi Arabia and the French Alps. It captures the horrors of war, including fighting hand-to-hand in the trenches and pitched tank battles.

I’ll have my single-player impressions soon. In the meantime, I was able to set my feet in France in multiplayer at the Battle of Mont Saint-Quentin, which took place in 1918, near Peronne, Picardie, where Australian forces overtook a strategic defensive location along the German front line. As you can see in the video below, I was almost immediately taken down a few times while running in the open. I tried to find cover as quickly as I could, but enemies kept coming out of nowhere to sneak up on me. I played in Conquest mode, where 64 players try to dominate locations on the map. 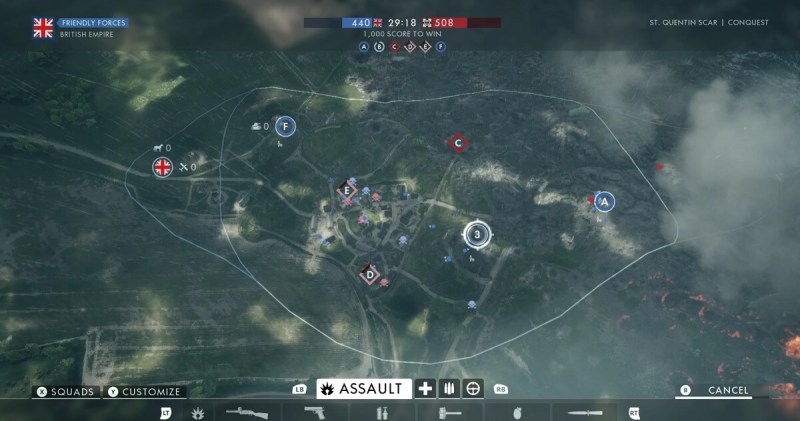 Above: The Mont Saint-Quentin map in Battlefield 1.

The village of Travecy sits in the middle of the map, with other objectives in the ruins of buildings on nearby hills. There’s a lot of grassy farmland, some trees, and a lot of fences and walls that you have to mantle over.

I played on the Australian side, mostly on foot. I never got near a plane as I never spawned at the airfield. But I was able to hop into an old British armored vehicle, which had six slots for machine guns. We had an amusing duel with a German soldier on a horse, who was evidently trying to kill our armored tank with a saber. I had a rare jump on some enemies when three of them jumped over a fence. I took out one of them with a shotgun and injured another. I took another shot and missed. And then the guy just sort of disappeared, presumably by jumping over a fence.

There’s a variety of weapons, including knives, shotguns, rifles, machine guns, tanks, airplanes, and primitive anti-tank weapons. Somebody used the latter to take out our armored vehicle just as I was about to shoot him. 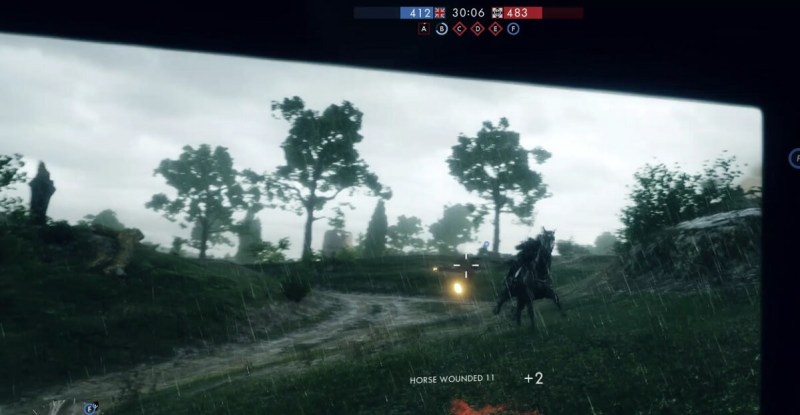 Above: This guy brought a horse to a tank fight in Battlefield 1 multiplayer.

I got five kills in the match, which wasn’t as bad as some past games during the beta. But I died many more times. Our team lost the battle. I managed to take a couple of soldiers out with a shotgun. There were some hairy moments. We took an objective at the Hotel de Ville, but a German tank threatened us. I was about to shoot my gun at the tank when someone blew it up, just as a cavalry soldier took a leap over the flaming tank (see the top picture). I also killed a foot soldier but then got bayoneted by another one just as I was about to shoot him.

Those who bought Play First on EA’s Origin Access can play parts of the multiplayer game as well as the full single-player game on the PC or the Xbox One. The full game launches worldwide on the PC and consoles on October 21. The title will have nine multiplayer maps at the outset.

I captured the full match on video. Check it out below.