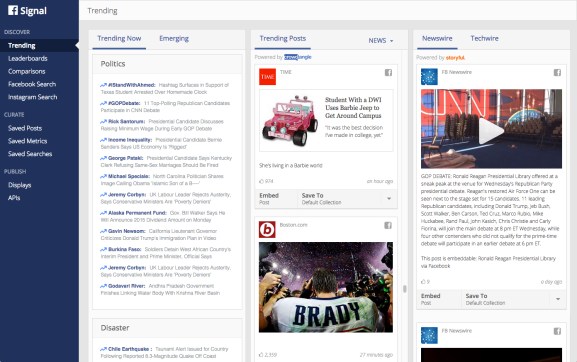 Facebook announced an update for its journalist app that’s aimed at keeping media apprised of what people are talking about on the social network and on Instagram. Starting Wednesday, Signal for Facebook and Instagram will receive support for live video, meaning that there’ll be a new column in the dashboard, replacing the current FBNewswire/Politicswire column powered by Storyful. The goal is to help surface more Facebook Live content that could be used to inform articles and facilitate real-time reporting.

Launched last September, Signal is a free tool to help journalists identify conversations taking place on the social network. “We’ve heard from journalists that they want an easy way to make Facebook a more vital part of their news-gathering, with the ability to surface relevant trends, photos, videos, and posts on Facebook and Instagram for use in their storytelling and reporting,” stated Andy Mitchell, Facebook’s director of media partnerships.

A notable integration at that time was Facebook’s use of Storyful, which powered the feeds to bring up the latest news and articles. But it looks like the partnership is over — at least for now. Live video will now take its place, further underscoring the importance of video in Facebook’s strategy. And it’s readily apparent how Facebook Live, Periscope, and other livestreaming apps are playing in the media, with members of Congress broadcasting their protest on the floor of the House of Representatives, a man’s attempt to climb Trump Towers in New York City streamed live, and a police shooting caught on video.

Inclusion of live video will give journalists a better understanding of stories through the eyes of people actually on the ground, enabling journalists to write better-rounded pieces. “Through our conversations with newsrooms, we’ve learned that journalists want to use more Facebook Live content, and today’s update aims to make that easier,” stated Áine Kerr, Facebook’s manager of journalism partnerships.