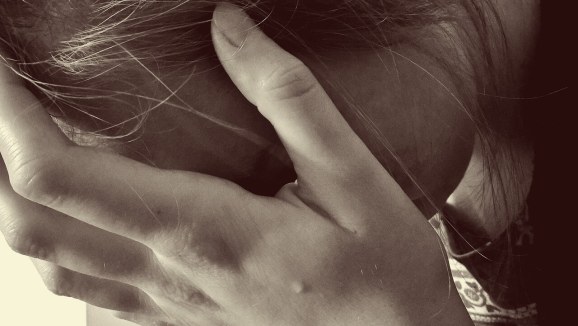 Following the release of a video of Donald Trump bragging about kissing and groping women without consent, Crisis Text Line saw an increase in messages about sexual abuse, founder Nancy Lublin told VentureBeat in a phone interview.

Crisis Text Line is a nonprofit that works with tech platforms and governments to use SMS and chat apps to connect distressed people with trained volunteers.

Messages about things like sexual abuse, sexual harassment, and rape were 12 percent higher than average for four days after the release of the video and remained 10 percent above average last week, said chief data scientist Bob Filbin.

“We can’t say Trump’s story caused this, just that the percentage change in sexual assault conversations is associated with the timing of the story,” Filbin said.

Above: Words associated with a person concerned with sexual abuse, according to Crisis Text Line data.

Machine learning and natural language processing are used to identify words associated with specific conditions and allow volunteers to speak with more than one person at a time. When volunteers are in conversations, machine learning is used to recommend responses.

When Crisis Text Line hears specific words associated with suicidal thoughts or depression, for example, a user may receive a message from Crisis Text Line. States like Ohio and Montana and cities like Chicago and San Francisco (coming soon) also work with Crisis Text Line.

“When the Orlando massacre happened, we did see about a nine percent increase in LGBTQ texters, and when Zane left One Direction, we saw an increase for the following three nights for anxiety and self-harm,” Lubin said.

“People may think ‘Oh, it’s just a band,’” Lublin added, “but if One Direction songs really speak to you, and you’re a huge fan, you might be really distraught.”

“The hashtag #CutForZane was trending worldwide. These were real fans cutting real skin,” she said.

Above: A map of concentration of messages received from people with a need to talk about sexual abuse

Crisis Text Line has sent more than 23 million messages since 2013 about things like bereavement, eating disorders, stress, and suicidal thoughts. The company is involved in 10 active attempts a day to alert authorities in an emergency situation. Roughly 80 percent of messages shared with Crisis Text Line are sent by people under the age of 25.

– Messages about stress are highest between 6 p.m. and 8 p.m.

– Messages about substance abuse peak between 4 a.m. and 6 a.m.

Crisis Text Line started in 2013 with a text to 4,000 Do Something users in Chicago and 4,000 in El Paso, Texas. Do Something is an SMS-based network to mobilize teenagers for social action, and within four months of sending those texts, the company had received messages from every area code in the United States.